The Inheritance by Olivia Mayfield -- Spotlight and Giveaway 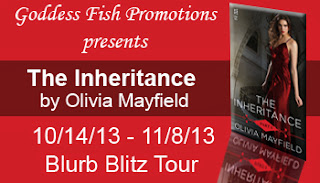 This post is part of a virtual book tour organized by Goddess Fish Promotions. Olivia will be awarding $25 Amazon or BN.com gift card to a randomly drawn commenter during the tour. Click on the tour banner to see the other stops on the tour.

Maggie Willings knew that returning home for her estranged grandfather’s funeral would not be easy, but she never expected the reading of his will to be the most difficult part. The four people named in the will—Maggie, her brother Robert, her ex-boyfriend Andrew, and her grandfather’s far-too-young girlfriend Bethany—are given a challenge: find out the truth about what happened to Maggie’s younger sister Cassandra, who vanished over eight years ago, and win the entirety of the estate.

Maggie is thrown by the strange request, reluctant to drag up painful memories of her sister’s disappearance, and bothered by her lingering attraction to Andrew, who wants to team up to solve the mystery. But there are ten million dollars on the line and Maggie has no idea where to start—or who she’ll be able to trust.

What had her grandfather been thinking? She couldn’t believe he had picked the four of them, four childhood friends and siblings whose lives had splintered so far apart. He was a shrewd man, a calculated risk-taker. And he knew each of them would have a stake in solving Cassandra’s…disappearance. Kidnapping. Murder. Or whatever it was that had happened to her eight years ago.

Obviously, Maggie and her brother had the personal angle in the case, since Cassandra was their younger sister. Both Bethany and Andrew had been close to the family when they were teens, so the two of them would likely know as much about the case as anyone else. Upon chewing these facts over, Grandpa’s reasoning made sense to Maggie, but that knowledge didn’t ease her turmoil.

Her gaze met Andrew’s. He accepted her scrutiny and matched it with a bold, open look of his own. His hand was steady, his face smooth. He’d obviously grown adept over the years at disguising his emotions; she could read nothing on him.

Would he accept the challenge for the money?

Or did he have something else to gain here?

Olivia Mayfield has been an unabashed fan of romance since she was a young teen, secretly devouring her mom’s Harlequins. She has a bachelor’s degree in Creative Writing, as well as a Master’s degree in English, and lives with her family in Ohio. In her free time, she loves reading, shopping, wearing absurdly high-heeled boots, cheesecake, singing karaoke, and harassing her friends.