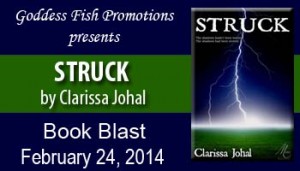 This post is part of a virtual book tour organized by Goddess Fish Promotions. Clarissa will be awarding an ecopy of STRUCK to three (3) randomly drawn commenters during the tour. Click on the tour banner to see the other stops on the tour.

After a painful breakup, Gwynneth Reese moves in with her best friend and takes a job at a retirement home. She grows especially close to one resident, who dies alone the night of a terrific storm. On the way home from paying her last respects, Gwynneth is caught in another storm and is struck by lightning. She wakes in the hospital with a vague memory of being rescued by a mysterious stranger. Following her release from the hospital, the stranger visits her at will and offers Gwynneth a gift--one that will stay the hands of death. Gwynneth is uncertain whether Julian is a savior or something more sinister... for as he shares more and more of this gift, his price becomes more and more deadly.

A loud ‘crack’ sounded and an iridescent white light surrounded her. Two things registered: a searing pain that ripped down her back and the ground which seemed to be pulled away from her at an alarming speed.

Pain shot through the back of Gwynneth’s head as she opened her eyes. Somebody was standing over her. She tried to focus on the face, but it hurt too much. A cool hand slid across her forehead. She opened her eyes again.

Pale, almost white eyes. High cheekbones, aquiline nose, and a well-shaped mouth. Long, white hair. Ageless. Beautiful, like a Michelangelo. All of those details registered with clarity before agony ripped through her body. She arched her back and cried out. The man murmured something into her ear which she couldn’t understand. She could feel the vibration of his voice and his breath on her neck as he gathered her in his arms. She opened her eyes and saw lightning fork to the ground silently behind him. She blacked out again. 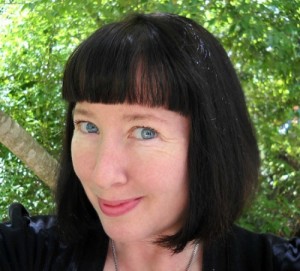 About the Author:Clarissa Johal has worked as a veterinary assistant, zoo-keeper aide and vegetarian chef. Writing has always been her passion. When she’s not listening to the ghosts in her head, she’s dancing or taking photographs of gargoyles. She shares her life with her husband, two daughters and every stray animal that darkens the doorstep. One day, she expects that a wayward troll will wander into her yard, but that hasn’t happened yet.


Buy the book at Amazon, Musa Publishing, or Barnes and Noble.
Posted by MJ Thomas at 3:45 AM