The Hathor Legacy by Deborah A. Bailey - Interview and Giveaway 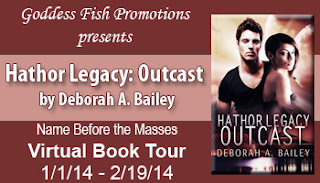 I've always enjoyed science fiction and fantasy. So when I get an idea for a story, it's usually in one of those genres. I grew up watching the Twilight Zone and Star Trek. With that type of setting, there are endless ideas for stories. But the best thing is that you can identify with the characters and their situations, no matter where the stories are set.

I think that depends on your genre. With fantasy you can create a world and make your own rules. But with science fiction things have to be plausible. As I was writing, I did a lot of research into different types of gadgets. Based on the technology we have now, how will things evolve? I'll give you an example. In my book, there are no conventional cars as we know them. The vehicles drive themselves using computerized traffic lanes. Well, something similar already exists today, though they're still being tested. My book also has aircars that fly short distances throughout the city. Well, I recently saw that a car that you can fly and drive home after landing does exist. It may go on sale as early as 2015. These things are not only plausible in a futuristic world, they're already being invented.

Nadira (my heroine) has taught me that working to make things better will always beat cynicism. She's passionate in her beliefs and she has a desire to improve things for people in her society. A lot of people around her are ambitious for power and status, and they expect her to be the same way. But she stays true to her beliefs and doesn’t lose focus. That's inspiring, especially at times when you might feel discouraged about reaching your goals.

I'm not sure if it's a quirk, but before I work on a story, I have to know the character names before I write about them. There's something about having a name that helps me to get a feel for who the character is. I don't bother with biographies because the character will tell me who they are as I go along. Most of the time, it starts with a conversation in my head that one character is having with another, then I go from there.

Most definitely a pantser! For years I wrote short stories, so it was much easier to write without having a lot of plot points written down. But with this novel that wasn't going to work. So I created a synopsis to give me a roadmap of where the story should start and end. With the synopsis, I have something that keeps me on track when ideas pop up that might take me off course.

My first computer! It's a Packard Bell from the '90's. And yes, it still works. It's got a huge monitor by today's standards, so that's on a table next to my desk. I'm not sure why I still have it, other than sentimental reasons. However, I do use it from time to time to play games that run on Windows 95. I was a computer programmer for many years, so might explain my attachment to it.

I'm hard at work on book two of the Hathor Legacy series. It's called Hathor Legacy: Burn. It'll have a lot of the characters from the first book, and a few new ones. Jonathan and Nadira will be returning and their relationship will be continuing to grow - but not without a few challenges along the way. The story will fill in more backstory about the Guardians and Hathor.

Thanks so much for inviting me to stop by your blog and share my book with your readers!

On the planet, Hathor, a powerful group called the Guardians serves as the security force for Novacorp, the corporation that runs Hathor with its ruthless monopoly. Nadira, as one of the most powerful Guardians, is expected to use her intuition and telekinetic powers to keep the capital city safe from thieves and intruders.

Jonathan Keel, son of a mine CEO on the nearby planet, Astarte, is wealthy, privileged and used to getting what he wants. When his father goes missing after a robbery and explosion at the mine, he defies the authorities and heads to Hathor to search for him and for the robbers.

Struggling with their growing desires, and chased by company security, Jon and Nadira find that solving the crime leads them to endure betrayals from the people closest to them, as secrets are revealed that not only link their pasts but also threaten to destroy Jon's family and separate him from Nadira forever.

Nadira walked through the open doorway that led to the kitchen. It was empty, except for some instant food packs that were on the counter next to the deep, stone sink.

She examined one of them. Fish soup, not exactly appetizing. It was enough to make her miss Jason's cheerful house. Back in the dining room, she peeled off her damp jacket and draped it over the back of a chair.

Rain pelted the window, leaving streaks across the glass. Zina wouldn't be a threat while this kept up.

A boom of thunder shook the house, echoing through the empty room. "Jon?" she called out. No answer. "Jonathan!"

Her response was a thud, followed by another one. Nadira rushed up the stairs. Breathless, she checked the first room. It was empty except for a chair facing the window. Darting to the room across from it, she got there in time to see Jonathan wrapping a blanket around him, his boots on the floor.

"Why didn't you answer?"

"My shirt's wet. Figured this was warmer." He climbed on the bed. "Worried about me?"

"No!" He was the most exasperating man she'd ever met. "You like taking your clothes off, don't you?"

"I thought you liked to see me naked." He chuckled. "But I still have my pants on."

Nadira sat down on the edge of the bed, her back to him. Kicking off her shoes, she drew her legs up and sat cross-legged. Though she could feel a desire to be closer to him, she pushed it away. She was not going to give him the satisfaction.

As a little girl when Deborah A Bailey was watching Star Trek and Twilight Zone, she was writing and drawing her own superheroine comics. When she grew up, she continued to write and followed her love of technology into a career as a computer programmer and developer. But writing was never far away from her heart, so over the years she wrote and published stories set on other worlds and in Earth's future. Ultimately she fulfilled a lifelong dream and completed her first novel.

Her short stories have won awards from the Philadelphia Writers’ Conference and her work has been published in US1 Magazine and the Sun. And she recently published a short story collection, Electric Dreams: Seven Futuristic Tales. In her "other" life, she's a freelance writer who's published two non-fiction books and countless articles that have appeared in print and online. Visit her blog for writing tips, interviews and updates.