Kiss the Enemy by Dianna Love - Spotlight and Giveaway 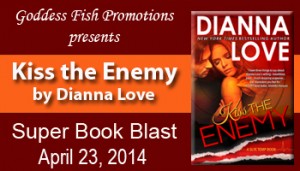 This post is part of a virtual book tour organized by Goddess Fish Promotions. Dianna will be awarding EITHER the ebook box set of the first 3 Slye Temp OR a signed copy of ONE of the first 4 Slye Temp books. (Print Books are Continental US Only - Amazon/iTunes/Nook ebook equivalent for international) to one randomly drawn commenter at each stop during the tour, and a GRAND PRIZE of Signed copies of all 4 Slye Temp books – LAST CHANCE TO RUN, NOWHERE SAFE, HONEYMOON TO DIE FOR – plus a MONOGRAMMED SLING BACKPACK, and swag pack of surprise goodies. (Continental US only for print books - Amazon/iTunes/Nook 3 ebook box set for international) will be awarded to one randomly drawn commenter during the tour. Click on the tour banner to see the other stops on the tour.

Her only hope is in the hands of her enemy. Slye Temp operative Margaux Duke is chasing an international terrorist who murdered the last of her family. But her plans go up in smoke when her agency is in the crosshairs of the dangerous killer, forcing her to turn rogue to protect the only family she has left - her team. This is no time to get involved, especially with an enemy who steps between her and the terrorist she has to stop.

Logan Baklanov has been known by many names in the underbelly of international terrorism and will do whatever it takes to shield those he loves from the treacherous world he lives in. When his brother’s life is in jeopardy, Logan takes on a role that places him at the top of the most-wanted lists of government security agencies in every country. He accepts the no-win situation, willing to make the ultimate sacrifice until a long legged beauty draws the attention of his deadly target and screws Logan’s carefully planned mission.

Margaux and Logan must join forces in a dangerous game to save a major city from a powerful psychopath, but their ruse escalates out of control when the heat smoldering between them threatens to explode.

Margaux gazed around the elegant room, taking in the mundane, wealthy men shopping for an expensive party girl for the night. All of the clients here were middle aged and ordinary. On the other hand, Dragan’s bodyguard was anything but uninteresting. He stood off to her right, with Secret-Service-looking eyewear and a coal-black designer suit that had to be custom-tailored to fit shoulders as wide as his. That was one big man. Just her flavor, if she had any interest in a taste.

Surprisingly, he still managed to blend into the shadows, motionless as a tiger waiting for his dinner to stroll by. Power rolled off him in silent waves. She couldn’t tell much about his face with that thick, but neat, black beard and his eyes hidden. Handsome was too simple a word to describe him, too civilized. Like admiring a wolf for its lush coat or a shark for its grace in the water, a woman would find this man attractive in a deadly way. A woman who enjoyed playing with fire or dancing with lightning. A woman who was a fool. Nothing about that man invited sexual banter, which she found even more appealing. No, he was not one to play with and that presented a problem. Because right now she had to get to Dragan and that bodyguard was her only route. 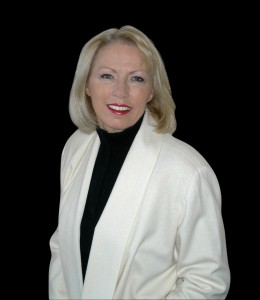 About the Author: New York Times bestseller Dianna Love once dangled over a hundred feet in the air to create unusual marketing projects for Fortune 500 companies. She now writes high-octane romantic suspense, thrillers and urban fantasy.

Her new Slye Temp romantic suspense series launched its first four books in 2013 to rave reviews and more will follow in 2014. Her books are available in print and ebook.

On the rare days she’s not in her writing cave, Dianna enjoys touring the country on her BMW motorcycle. She lives in the Atlanta, GA area with her motorcycle-instructor husband and a tank full of unruly saltwater critters. Read excerpts of her books at www.authordiannalove.com or join her Dianna Love Street Team on Facebook and get in on the fun!

Buy the book at Amazon, Barnes and Noble, Kobo, iTunes, or Google Books. For other buy links, to read an excerpt, or to purchase an autographed copy, visit the KISS THE ENEMY page on Dianna’s website: http://www.authordiannalove.com/bookshelf/77/kiss-the-enemy---book-4. a Rafflecopter giveaway
Posted by MJ Thomas at 4:00 AM