The Children of Lubrochius by Matthew D. Ryan - Spotlight and Giveaway 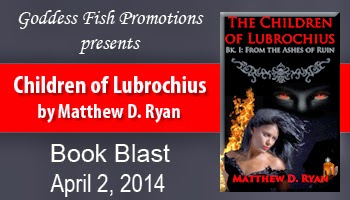 This post is part of a virtual book tour organized by Goddess Fish Promotions. Matthew will award a miniature of a demon from the Reaper Fantasy Miniatures to a randomly drawn commenter during the tour (US ONLY). Click on the tour banner to see the other stops on the tour. Remember, the more you comment, the better your chances to win.

The vampire, Lucian val Drasmyr, has been defeated, but not destroyed: Now he serves another evil: Korina Bolaris, a young and gifted sorceress bent on subverting the power structure of Drisdak. Only Coragan of Esperia can hope to stop them. But is even he prepared to face the dark cult who claims her as their own: the Children of Lubrochius?

A change came over the body. Wisps of white mist, like smoke began issuing from his mouth and nose, and from the sides. The mist grew thick, coagulating around the edges of the corpse and rolling down the sides of the altar. Soon, the mist darkened, turning grey, and then black. Then, the body convulsed and burst aflame. The fire quickly spread across the altar and even down around it on the floor, coming into being everywhere the mist had spread.

Korina felt a wave of ungodly heat blast her in the face. Though she remained on her knees, she backed away somewhat until the heat of the fire was more bearable.

There was a terrible keening scream. The fires writhed, stretching upward toward the ceiling as a figure appeared on the altar amidst the flames, slowly coming into existence like a solidifying ghost. It stood seven feet tall and wore a simple black robe adorned with runes of power stitched in white. Its scaly skin was a marbled mix of black and red; its reptilian head bore two long horns stretching toward the ceiling, one over each glowing, green eye. A forked tongue periodically snaked between its razor-sharp teeth, and a thin stream of drool depended from the corner of its mouth. The robes it wore must have had a hole in the rear, for two enormous bat-like wings protruded from the creature’s back and spread outward like battle standards on a field of war.

Matthew D. Ryan is a published author living in upstate New York on the shores of Lake Champlain. Mr. Ryan has a background in philosophy, mathematics, and computer science. He has a black belt in the martial arts and studies yoga. He has been deeply involved in the fantasy genre for most of his life as a reader, writer, and game designer. He is the operator of the web-site matthewdryan.com which features his blog, “A Toast to Dragons,”a blog dedicated to fantasy literature, and, to a lesser extent, sci-fi. Mr. Ryan says he receives his inspiration from his many years as an avid role-player and fantasy book reader. He has spent many long hours devising adventures and story-lines for games, so it was a natural shift moving into fantasy writing.

Mr. Ryan is the author of the exciting dark fantasy novel, Drasmyr,, its sequel, The Children of Lubrochius, and a growing number of short stories. His first novel, Drasmyr, has consistently earned reviews in the four and five star range and serves as the prequel to his upcoming series: From the Ashes of Ruin. In addition to Drasmyr and The Children of Lubrochius, Mr. Ryan has published several short stories on-line, including: “Haladryn and the Minotaur,” “The River’s Eye,” and “Escape.”

Links to the Author on the Internet

The prequel to “The Children of Lubrochius” is “Drasmyr” and is free pretty much everywhere! Here are the buy links: