This post is part of a virtual book tour organized by Goddess Fish Promotions. Meg will be awarding a $50 Amazon GC to a randomly drawn commenter. Enter the Rafflecopter at the end of the post. Click on the tour banner to see the other stops on the tour.

Welcome back to It's Raining Books, Meg! If someone were writing a story about you, what would your blurb say?

Meg Benjamin wasn’t born in Texas, but she got there as quick as she could (actually, she didn’t—it took several years of wandering around the country before she ended up in San Antonio). Thanks to all those sultry South Texas nights, she finds herself dreaming of being a romance writer even during the long, air-conditioned days of teaching English and Communication at Enormous State University. She and her lovely hubs bring up two boys without a romantic bone in their respective bodies (an accountant and a software engineer for Pete’s sake), but she still harbors hopes of joining the romance ranks someday.

And then it happens. Samhain Publishing accepts her first book, Venus In Blue Jeans, set in a mythical Hill Country town—Konigsburg, TX. But the day she gets that joyful news, she also gets some very unjoyful news: her hubs has been passed over for a promised promotion. This leads to a new job for hubs in colorful Colorado and a three-month forced separation for Meg while she packs up the house in Texas, retires from her job at ESU, and writes more Konigsburg books.

Newly established in the Rockies, Meg publishes six more books set in Konigsburgfor Samhain, along with three more set in San Antonio and a wild card (Bolted) taking place in New England. She wins some awards (the RT Reviewers Choice Award, the EPIC for contemporary romance, the Beanpot for Suspense, and the Holt Medallion). Now she’s ready with Konigsburg #8, Hungry Heart. But will her readers come back to Texas again for one more round in the Hill Country, particularly if it means a taste of barbecue? Stay tuned, gentle readers, stay tuned.

I love writing about food and cooking, and I generally have a scene or two where my characters have a meal together (which usually leads to something else they do together). But I didn’t know much about barbecue and barbecue contests until I started working on Hungry Heart. It turns out that not only does barbecue vary from state to state, but there are actually several different barbecue styles within the state of Texas. I was fascinated with the history of Texas barbecue—so fascinated I had one of my heroes, Harris Temple, give one of my heroines, Darcy Cunningham, a quick rundown when he tries to explain just why they have to serve white sandwich bread instead of the biscuits she wants to whip up (it’s all about cotton pickers and German butchers).

Probably the first sex scene between Chico Burnside and Andy Wells. He’s a former pro wrestler who works as a bouncer at a local club. She’s a shy scientist who analyzes water. They’re absolutely the last people you’d expect to end up together, and getting them together was a lot of fun. But they both face their first time together with a lot of trepidation. I had to figure out ways to get them through it (not that it was much of a chore, mind you).

Oh man, that’s a loaded question! I love both my heroines, but I’m probably closer to Andy personally. She’s someone who never really expected anything like romance to happen to her, and she has to stand up to a lot of people who want to see her relationship with Chico fail. In addition, she’s a very private person, and she has to overcome her own shyness and her fear of being “different”. But she does it. And Chico’s a hell of a guy, if I do say so myself!

Peace, love, and barbecue—with a big order of sexy on the side.

Sous chef Darcy Cunningham is less than entranced with small-town Konigsburg’s obsession with barbecue. But her future career as a chef de cuisine requires expanding her culinary horizons, so she talks the Barbecue King, a.k.a. Harris Temple, into taking her on as his apprentice.

However, learning Harris’s professional secrets wasn’t supposed to include falling for his spicy blend of smoky sexiness and laid-back charm.

Chico Burnside specializes in flying under Konigsburg’s small-town radar, but lately life has been going a little too smoothly, even for him. Hoping to shake things up a bit, he talks Harris into teaming up for Konigsburg’s first barbecue cook-off. But once shy scientist Andy Wells catches his eye, Chico’s got more on his mind than brisket. Like enticing her out of her shell to show her just how tenderly a big guy can love.

As the competition ignites, so does the romance. Until a natural disaster threatens to derail Konigsburg’s dream team before the grills even get good and warmed up. 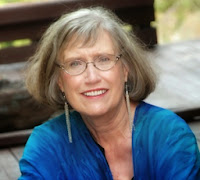 Meg Benjamin is an author of contemporary romance. Her Konigsburg series for Samhain Publishing is set in the Texas Hill Country and her Medium trilogy for Berkley InterMix is set in San Antonio’s King William District. Meg’s books have won numerous awards, including an EPIC Award for Contemporary Romance, a Romantic Times Reviewers’ Choice Award for Indie Press Romance, the Holt Medallion from Virginia Romance Writers and the Beanpot Award from the New England Romance Writers. Meg lives in Colorado with her DH and two rather large Maine coon kitties (well, partly Maine Coon anyway). Her Web site is http://www.MegBenjamin.com and her blog is http://megbenj1.wordpress.com/. You can follow her on Facebook (http://www.facebook.com/meg.benjamin1), Pinterest (http://pinterest.com/megbenjamin/), and Twitter (http://twitter.com/megbenj1). Meg loves to hear from readers—contact her at meg@megbenjamin.com. a Rafflecopter giveaway
Posted by MJ Thomas at 4:00 AM