Ladder to the Red Star by Jael Wye - Interview and Giveaway 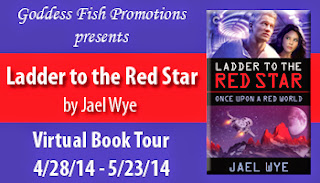 This post is part of a virtual book tour organized by Goddess Fish Promotions. Enter to win a digital copy of Ice Red, the first book in the series, to a randomly drawn commenter during the tour, so answer the author's question below. Click on the tour banner to see the other stops on the tour.

I write science fiction romance because I want to explore the possibilities the future holds for us. Scifi books often speculate about how scientific achievements might change humanity both individually and culturally. But by adding the fairy tale romance element, I also get to write about the fundamental human emotions like love and courage that stay the same throughout the ages. In my new release Ladder to the Red Star, my hero and heroine Jacques and Devi are surrounded by cool technology, but what motivates them to fight the evil that threatens their world is their basic decency and their and love for each other.

In building my Solar system of the future, I wanted to stay close to the real world, with technology consistent with physics as we know it today—no light sabers or warp speed, I’m afraid! But the limitations of plausibility still left me with a lot of fantastic technology to exploit, such as space elevators and super submarines. To research these and other topics, I went to sources such as NASA and other science and space organizations, futurists like Michio Kaku, science articles from reputable publications, and of course the redoubtable Wikipedia.

One thing I learned from my heroine, Devi, is that when travelling to another planet, one should prepare for severe culture shock. Devi was born and raised on Mars, and when the hero, Jacques, kidnaps her and takes her down to Earth, she has a terrible time adjusting to the alien environment and the strange ways of the natives. She comes to understand the common humanity of Martians and Earthers, but not without a little help from Jacques.

My odd writing quirk is my habit of talking to myself. There’s no better way to smooth out the rhythm and diction of dialog than to hear it spoken aloud. And sometimes I need to argue with myself over what motivates a character, or how to block out a scene. It earns me a few odd glances, but why write if you’re not allowed a bit of craziness?

Ladder to the Red Star is based on the classic tale of Jack and the beanstalk, so I had a framework for my story mapped out for me from the beginning. Some of the details changed as I went along, but my major plot points were all set before I started writing. My challenge with each fairy tale retelling is to create characters with their own specific and individual motivations driving them to fulfill the requirements of their archetypal stories.

First, and most importantly, there is a cup of coffee sitting to my right. I get jittery without one. There is also a pile of sticky notes and pens, because my novels often take shape on sticky notes before they get to my computer screen. Finally, there is a philodendron. I’ve found that houseplants make great critique partners, because they listen patiently and agree with everything I say.

Right now I’m working on the next book in the Once Upon a Red World series, which will tell the story of Devi’s parents, Max and his estranged lover Sita, as they confront an insidious threat on their journey home to Mars. There are many more tales yet to be told in the Solar system of the future, so stay tuned.

What is your favorite couple in science fiction? Leia and Han? Jake and Neytiri? Spock and Uhura? (or maybe Spock and Kirk?)

Once upon a ruined Earth 300 years in the future...

Jacques Tallinn, biotech smuggler and thief, is after the cure for a brain disorder he's suffered since childhood--a disorder inflicted by a powerful tyrant. To get the cure, Jacques will need to climb the space elevator to the new Zenith space station hovering above Earth and go undercover in the lab where it's produced.

Martian head tech Devi Chandra is immediately intrigued by her sexy new lab assistant. Though she insists on keeping things professional, she finds herself charmed by Jacques. Until he betrays her trust, kidnapping her and spiriting her off to Earth.

All Jacques needed to do was steal the biotech and get back home. But when things go wrong, he can't bring himself to leave Devi behind. Now she's injured and a simple caper has become an intergalactic cause, endangering his life and the lives of millions of others. But the hardest part? Winning back Devi's trust.

Jael Wye grew up on the American Great Plains, went to school in the Midwest, and now lives in beautiful New England with her family and her enormous collection of houseplants. For more of Jael’s unique blend of futurism and fairy tale, don’t miss her ongoing series Once Upon A Red World.

Buy the book at Carina Press, Amazon, Goodreads, or eBooks.
Posted by MJ Thomas at 4:00 AM