In This Life by Terri Herman-Ponce - Guest Blog and Giveaway 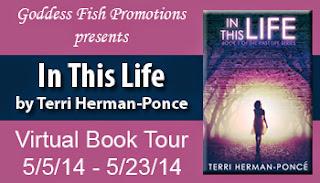 This post is part of a virtual book tour organized by Goddess Fish Promotions. Terri will be awarding a digital copy of IN THIS LIFE (Book 1 of the Past Life Series) to a randomly drawn commenter at each stop during the tour, and a Grand Prize of a $50 Amazon gift card to one randomly drawn commenter during the tour. Click on the tour banner to see the other stops on the tour.


Five Things We Might Not Know About Terri Herman Ponce

Oh dear. Something tells me this might come back and bite me. Okay. Deep breath. Here it goes.

One. When I had just gotten my driver’s license, I loved being independent but I was always in a rush. Not because I was late, but because I just felt like I had to go. So one morning, I hurried out to my car to take off. Now, I wasn’t paying attention to the things around me. All I wanted was driving freedom. So I started the car and about halfway down the block I heard a really strange, loud, scraping noise. But I kept going, thinking (hoping!) the noise would stop. It didn’t. About a dozen blocks away, I finally couldn’t take it anymore and pulled over. Turned out I’d run over one of the garbage cans that were in front of my car (didn’t see it!) and dragged it the entire ride. I tried tugging it out but it wouldn’t budge, so I backed up and, voila! The thing came loose. But it was all busted up and I didn’t want to bring it back home because, you know, I had places to go! So I left it in front of someone else’s house.

Two. Growing up, I loved the Partridge Family. So much that I often pretended to be on their show and part of their family. Because I pretended I lived with them, I wrote my own songs and sang them, but I didn’t know how to write or read music. So I wrote the lyrics in certain positions on a notebook line to indicate whether it was a low note (directly on the line), a middle note (in between two lines), or a high note (closer to the line directly above). As you can probably guess, the songs were awful.

Three. Some people adore shoes or handbags or jewelry. I have a fetish for colorful pens and notebooks with pretty covers. I keep a stash under my bed that I tap into whenever I need a new fix.

Four. I LOVE to cook. LOVELOVELOVE it. I also cook with wine and, as the old saying goes, sometimes I even add it to the food.

Five. To me, there’s nothing like a sunrise. I love watching the sun break the horizon, all glowing and gold and grand amid pale pinks and billowy blues. It makes me feel small, it puts things into perspective, and it reminds me that there’s so much more out there of which I’m a part and that I’ll never know or see. It humbles me. It relaxes me. But mostly it centers me.

Psychologist Lottie Morgan knows something is wrong when she relives memories of a lover she's never had. At first she attributes them to fever-induced dreams. But when the fever disappears and the visions don’t, Lottie realizes something else is going on

Then she meets Galen. Their first encounter is as intense as it is eye-opening, and his revelation that they shared a passionate relationship thousands of years ago in ancient Egypt entices Lottie into wanting to learn more about her past. Her decision, however, comes at a price. Galen may hold the answers but he could destroy the devoted, lifelong relationship Lottie has with her current lover, David.

It also could mean her death—again.

Someone is protecting millennia-old secrets, determined to keep them buried while exacting a revenge on Lottie for a mistake made a very long time ago. A mistake she could be destined to repeat.

Terri looks for any opportunity to make stuff up. She thinks anything that can’t so easily be explained is worth an extra look and often makes a great story. She loves red wine, scotch, sunrises, Ancient Egypt, the beach—and a host of other stuff that would take too much real estate to talk about. The youngest of five children, Terri lives with her husband and son on Long Island. And, in her next life, if she hasn’t moved on to somewhere else, she wants to be an astronomer. Terri’s fascinated with the night skies almost as much as she’s fascinated with ancient Egypt.

Terri is a member of member of Sisters in Crime and Mystery Writers of America, and you can read about her at http://terriponce.com.

If you love social media, you can also find Terri on Facebook and on Twitter. Come visit. She’d love to hear from you!