Shape of My Heart by Kemberlee Shortland - Review and Giveaway 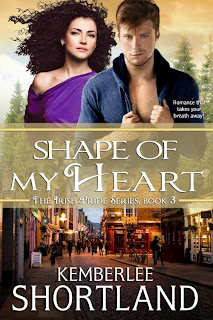 This review is in conjunction with a virtual book tour organized by Goddess Fish Promotions. Kemberlee will be awarding a plot of land in Ireland, donated by Macroom Land Trust to a randomly drawn commenter during the tour. Click on the tour banner to see the other stops on the tour.

Gráinne has moved back to Dublin to get her life straightened out. She dreams of college and a better life. She’s working, but the money isn’t enough to support herself and pay tuition. Moonlighting at The Klub! as an exotic dancer seems to be her answer to fast money.

John ‘JD’ Desmond is a detective working undercover in the Blues Tavern. The Klub!, owned by Jimmy Malloy, is being used as a drug front, headed by the notorious Taylor Wade. JD had intended to get Gráinne to snitch for him, but when he falls in love with her, things get complicated.

When Gráinne witnesses Jimmy’s murder, she and JD are forced to go on the run until Wade can be apprehended. Wade lives up to his nickname, The Hunter, and JD and Gráinne quickly find themselves at the end of a gun and running for their lives.

This book is part of a series, but don't let that stop you from picking it up. It's definitely stand alone, although I DO want to read the other books in the series.

We first meet Grainne as her exotic dancer persona, Jett. There was a little disconnect for me between the first and second chapter--it took me a few seconds to realize time had passed and it was the same character. Once I was passed that minor bobble I enjoyed the rest of the book.

I understood her reasons for wanting to "prove" herself to her brother--her backstory is only hinted at but apparently she had a history of making bad choices. Once she realized how slippery the slope was, she tried to back out of it, but it was almost too late.

I really liked JD-- he was sweet, caring, but not beyond telling her the hard truths. The banter between them in the pub in chapter two was fun.

The romance and suspense was well balanced. The sleazeballs were completely sleazy-- but, as in all good romantic suspense books, right prevails. But not without some heartstopping moments beforehand.

“Talk?” She put her magazine aside. “About what?”

“I think you know.” He locked gazes with her. He could tell she was nervous by the way she started fidgeting.

Then she turned away, refusing to look at him for longer than a millisecond. “My love life is none of your concern,” she told him, reminding him unnecessarily of their previous discussion.

“That’s not what I’m talking about.”

“Then I don’t know what you mean.” She spun on her heel, intent on leaving the bar area.

He grasped her arm. To his surprise, she didn’t struggle. But something odd happened as he loosened his grasp. He felt something powerful pass between them. His fingers tingled as he touched her. It radiated up his arm and shot through his body.

For the second time today, he felt himself stiffen, and wished that circumstances were different, that she was naked beneath him and gazing up at him with eyes he knew would undo him.

She glanced over her shoulder, but not directly at him. “Let me go.” Her barely audible words shook him back to the moment. It wasn’t a command, but he couldn’t help noticing her words were tinged with pleading.

“Will you stay to talk with me? I think this is important.”

Kemberlee is a native Northern Californian who was raised in a community known as Steinbeck Country; home to author John Steinbeck, as well as Jack London, Robert Louis Stevenson, and others. With so much literary influence around her, it's not hard to see why Kemberlee fell in love with the printed word.

It was in 1997 while employed by Clint Eastwood that Kemberlee couldn't pass up the opportunity to spend six month in Ireland. While in Ireland, she met a man who eventually became her husband.

Living in Ireland has allowed Kemberlee to study the country's torrid past and unique culture first hand, and has even picked up a cúpla focal . . . a few Irish words.

Kemberlee's current work in progress is a time travel romance called The Diary.