The Fox's Mask by Anna Frost - Spotlight and Giveaway 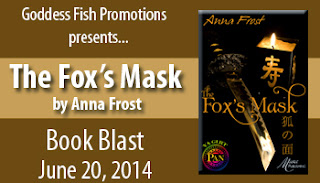 This post is part of a virtual book tour organized by Goddess Fish Promotions. Anna will award a $30 gift card (Amazon OR B&N OR Kobo) to a randomly drawn commenter during the tour. NOTE: This book is on sale for only $0.99 for a limited time!!

Demon hunter Akakiba keeps many secrets from his human companion. The fact he's a werefox isn't the worst one.

In feudal Japan, magic is dying. As a demon hunter, Akakiba finds this problematic. The evil he's been trained to destroy is disappearing and, along with it, the shape-shifting abilities of the clan he left behind. With his only companion, a determined young human named Yuki, Akakiba traverses the country slaying demons and performing odd jobs.

But when an army of demon-possessed humans masses to exterminate his clan, Akakiba must put aside old feuds and protect his family–-all while hiding an important secret from Yuki. Will they find a way to defeat the demon possessed before it's too late? With magic dwindling, will it matter either way?

Rumor said that shinobi carried out their work in the dead of night, wearing black to disappear in the shadows, entering castles unseen and committing murder unheard.

Rumor, Sanae found out, was wrong.

When she noticed the intruder, it was merely late evening and the colors of sunset hadn’t yet drained from the sky. A gentle wind was tugging strands of hair out of the red ribbon at the nape of her neck, and the air was thick with the scent of spring and renewed life. It was a sudden noise, a thud that did not belong, that first alerted her.

She knelt outside the clan head’s suite on the porch that opened on the gardens. She wasn’t wearing practical clothing like a real guard, but rather a bright-blue furisode with ample sleeves and a beautiful flower pattern. She wore no sword, but a knife was camouflaged in the colorful sash about her waist. Her function was to raise the alarm in case of danger. Fighting was for the adults, those who had undergone the coming-of-age ceremony and thus earned the right to bear a sword. She would soon be one of them, but not yet.

Sanae watched from the corner of her eyes as the intruder became visible among the flowering plum trees. The sound that had alerted her must have been his landing after he’d jumped the wall, an impressive feat indeed. Twice as impressive considering this wall was the second of the clan house, created specifically to protect the clan head and his entourage. The first wall was taller and better guarded. How had this intruder gained access?

Attacks on the Fox clan were so rare that it was considered an honor to witness one. For one to happen while she was standing guard for the first time was amazing luck, and her excitement was far stronger than her fear.

The intruder was dressed in a plain manner that would not attract attention in the clan house, but he could not disguise that which betrayed him: his human aura. The only humans who lived in the clan house were women who did not bear swords. None but a shinobi, an assassin, would be so bold as to try this.

Under normal circumstances, Sanae’s duty would have been to raise the alarm and watch as the intruder fled, discovered too soon to act. But there was no need to let the shinobi know he had been discovered; there was a fox in the garden.

Sanae stared at the fox until she had its attention, then deliberately flicked her gaze toward the intruder. The fox slunk away to enter through a door out of the shinobi’s sight. She forced herself to remain calm, to pretend she hadn’t noticed a thing. After all, she was but a young girl watching the flowers in bloom.

Her heartbeat quickened as the intruder approached, discreetly sizing her up. Would he attack, or would he seek another entrance to the rooms she guarded? There was no doubt he was after the clan head: assassins always were.

About the Author: Anna Frost is a Canadian girl who spends winters writing and dreaming of summer. An overdose of Japanese culture and media has led her to write fantasy inspired by Japanese mythology. In a shocking break with literary tradition, Anna does not live with cats. Instead she lives with chinchillas, which can be just as demanding and evil as cats.

Buy the book at Amazon, Smashwords, Barnes and Noble, or Kobo.