This post is part of a virtual book tour organized by Goddess Fish Promotions. Sherri will be awarding a $25.00 Amazon gift card to a randomly drawn commenter during the tour. Click on the tour banner to see the other stops on the tour.

Thanks for letting me post on It’s Raining Books today! Here’s the inside scoop: 5 things you may or may not want to know about little old me.

First of all, I’ve turned into somewhat of a health nut as I’ve aged. When I was young I could have cared less about eating a healthy diet. Somewhere along the way I changed. If you walk into my kitchen today, you will find cultured foods. No, they don’t wear fancy clothes, diamonds or pearls. I mean you will find foods that are sitting in cozy little corners lacto-fermenting away, such as yogurt, kefir, and sauerkraut.

When I’m not growing yeasts and bacteria cultures in my kitchen, I also like to make jewelry. I don’t mean the standard jewelry store types of jewelry; I like statement pieces. My statement pieces can be quite bold, leaving me to wonder: Now, what can I wear that with?

In the winter I usually get in the mood to crochet. I don’t mean like my grandmother’s crochet. I like mixing colors and doing something a little out of the ordinary, like the asymmetrical scarf I’ve almost finished. All it needs to be finished are the bobbles for decoration. Bobble making is boring though, so I’m dragging my feet.

One last thing, I developed a horrible fear of water over the years. My nightmares consist of large bodies of water that I need to cross or flooding in general. This fear is so strong that I am determined to overcome it. My swimming skills are not great, so I’ve recently started improving them. Maybe it’s working because I haven’t had a water nightmare in a long time. Now when I have a nightmare, I dream about railroad tracks and fast moving trains. I’m not sure how to curb a fear of getting hit by a train. Drive back and forth across the tracks? I’ll have to give that some thought.

Twenty years have passed since Keeva killed her grandfather, Delius. She drank in his powers and became the Queen of the Vrykolakes, known by the ancient Greeks as the bloodless vampires.

She and Severin have settled into some semblance of a normal life, living in rural North America with their two kids, Connor and Kaie. Their neighbors would never suspect that they are anything more than a typical family.

Aside from keeping their true identity a secret, everything seems to be going well for the small family.

Are monsters ever afraid of the dark?

When Kaie awakens from a prolonged sleep, she is no longer a child, and she is no longer in familiar surroundings. In a realm where no sunlight penetrates the dark cloud layers, a place called The Forbidding awaits. Echoes of madness surround her. Something lurking in the Belows warn of her doom. Legend holds that whatever is born or brought into the Belows must remain there.

Kaie vows to find a way to return to her family, but first she must learn to face her darkest fear, if she is ever to escape from the darkness below.

Here it was, her childhood nightmare in the flesh. Cold dark flesh. It thrashed back and forth, screaming so loudly that Kaie felt like her eardrums would burst. She held onto the sting blade and felt it sink deeper into the specter’s flesh. It ripped downward into muscle and tendons, tearing as she slipped farther down into its throat.

Down she went into the beast’s stomach. She was greeted by a numbing cold that crept upwards from her feet, making its way throughout her body, into her arms and hands, making it hard to hold onto the blade. She flexed her arms and felt the blade continue to slice into the creature’s stomach.

She wasn’t alone. The denizens of its stomach sprang to action at the bidding of their master. They were trying to pry the blade out of her hands. Their touch was freezing cold. She felt her hands slip on the hilt. They clawed and shrieked at her in anger. She fought back with her banshee fire and some of them responded by recoiling. With a thought directed at them she flung the nearest ones away and regained her grasp on the sting blade.

She was so tired. Something told her if she would simply let go, she would slip into a cold oblivion, be free from all pain and suffering, free…

No, it was a lie. With the remaining strength she had, she plunged the blade deeper and she saw it, pulsing away steadily. The creature’s heart was a deep, dark chasm…but it pulsed, pumping great blasts of cold with each beat of its heart.
About the Author: 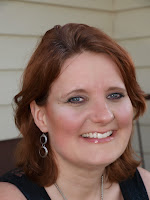 Sherri Lackey lives in Montana where the cold northern climate inspires her to write foreboding tales. She writes the way she cooks, and that is by using dashes of speculative fiction, a pinch of steampunk here, and a touch of urban fantasy there. She lives with her husband, Paul, in a house on a hill that she prefers to think of as an island. She has a faithful dog named Raymond, who likes to sit by her side while she writes, and a vampire cat named Penny who likes to sit on her shoulder purring or trying to nip at her neck. Find Sherri at her Website and Facebook. Buy the book at Amazon or Barnes and Noble.
Posted by MJ Thomas at 4:00 AM