What Echoes Render by Tamsen Schultz - Review and Giveaway

There’s a killer in Windsor intent on making Jesse Baker burn for the sins of others. But arson investigator David Hathaway isn’t about to let that happen. As the past echoes through their lives, will they remember that history, like fire, can give life just as easily as it can destroy it?

The blurb to this book isn't very descriptive, so I really didn't know what to expect.  First, while this is apparently part of a series (there are a couple other couples who are already married, and it's clear from their backstory they figured in previous books), it very, very easily stands alone.

What Echoes Render focuses in equal parts on the mystery and the romance, and juggles the two quite effectively. It also seasons the book with the feel of a small town community, and readers become well acquainted with many folks there.  It really combined some of my very favorite things to read, and added in exceptionally skilled writing and clean editing to make a book I very much enjoyed.

There were a few parts that were a bit slow, but they didn't happen often, and I suspect I know who the next book will be about, as we meet a man in this book who is clearly hero material. I really enjoyed reading about Jesse and David and their families and friends. They were good but flawed protagonists with believable backgrounds that fed their behavior.  The mystery was strong and, while I suspected the reason behind what was happening, there were enough red herrings to make me wonder.

As a fan of romantic suspense and small town stories, I really hit the jackpot here, and fully intend on both hunting up the previous books and will be waiting for the next in the series.  If not for the few places that dragged a bit, this book would have earned all five flowers, but even so, the author has made herself a fan and I'm so glad I got to read this book.

4.5 stars - This was a very good book! I'd recommend it to my friends.

Jesse looked at the clock on her dash as she pulled into a spot across the street from Julie’s Spin-A-Yarn shop. She wasn’t too late, just about fifteen minutes. She spotted Julie out front chatting with Jason, the owner of the local health food store, and waved. Main Street was still quiet this time of day, except for those partaking of breakfast at Frank’s Fed Up and Fulfilled Café, and both proprietors looked up and waved back as she got out of her car.

She smiled and was just sliding her keys into her purse when a deep sound reverberated around her. In a flash, Jesse felt like she was being swallowed, like a weight was pressing against her entire body, stealing the air from her lungs, making it impossible to scream. A cacophony of sounds assaulted her ears, then suddenly everything seemed to slow down. Somehow, the noises that had seemed so angry before became dampened and muffled. With no time to comprehend or react to what was happening, she watched as the windows of Spin-A-Yarn erupted outward, exploding onto the street toward her. 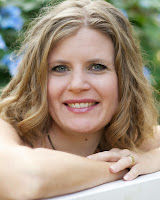 Tamsen Schultz is the author of several romantic suspense novels and American Kin (a short story published in Line Zero Magazine). In addition to being a writer, she has a background in the field of international conflict resolution, has co-founded a non-profit, and currently works in corporate America. Like most lawyers, she spends a disproportionate amount of time thinking (and writing) about what it might be like to do something else. She lives in Northern California in a house full of males including her husband, two sons, four cats, a dog, and a gender-neutral, but well-stocked, wine rack.

Buy the book at Amazon or Barnes and Noble. a Rafflecopter giveaway
Posted by MJ Thomas at 4:00 AM