This post is part of a virtual book tour organized by Goddess Fish Promotions. George T. Chronis will be awarding $25 Amazon/BN GC to a randomly drawn winner via rafflecopter during the tour. Click on the tour banner to see the other stops on the tour.

Sudetenland© is the premiere novel by author George T. Chronis. The book delivers suspenseful and sweeping historical fiction set against Central European intrigue during the late 1930s leading up to 1938′s Munich Conference. The characters are the smart and sometimes wise-cracking men and women of this era – the foreign correspondents, intelligence officers, diplomats and career military – who are on the front lines of that decade’s most dangerous political crisis. With three million ethnic Germans in Bohemia at stake, Adolph Hitler’s unshakeable will demands that the Sudetenland be ripped from Czechoslovakia and joined with Germany. The novel takes readers behind the scenes into the deliberations and high drama taking place within the major capitals of Europe as the continent hurtles toward the crucible of a shooting war.

Ros strutted into Lasky's office, coming to a dead end in front of the wood desk that was as long as Rhode Island. She tapped the sole of her shoe on the floor impatiently while Lasky bellowed at someone else in the newsroom. At least the afternoon view over Manhattan was pleasing. Blowing in like a foul wind, Lasky slammed the door and walked right past her.

"Boss, I'm sorry to run a little fast with your image back there," Ros offered up in appeasement. Still rounding his desk, Lasky shook her off with a wave of his hand. "Forget it. That's not why you're here. I have a job for you."

Wondering whether she should be concerned or happy, Ros decided to play along. "What kind of job?"

Sitting down, Lasky rifled through some paperwork until he found the document he was looking for.

"Yeah, go find this guy Lester downstairs, he'll get you all set up. Lodging, fares, advances, the whole low-down," Lasky finished, handing her the form.

"Who's Lester? What are you talking about? Where am I going?" she blurted out before taking a wild glance at the paperwork.

Lasky thought if he could keep Ros distracted, maybe he could get the problem child on the boat before she could cry about needing a raise. He reached out and grabbed the form back. Throwing it on the desktop, Lasky signed the paper with his fountain pen.

Done, he thrust the page back at Ros. "Paris. I'm sending you to Paris."

Ros looked down at the form, then at Lasky, then back at the form. "I'm going to Paris? When did someone around here start liking me?"

"Stop dreaming, no one around here likes you," Lasky taunted her while he walked back around to the front of his desk. "That screwy Miranda just stabbed me in the back. She found herself some guy over there, got married, and now she's running off to some French island in the Caribbean. I need someone to pick up the pieces in Paris. That's you."

"Just slow down. Miranda got hitched?" all of the angles weren't coming together in Ros' head. "Yeah, nice announcement: Hi Harry, I got married, and I quit," Lasky mimicked a feminine voice. These damn ditzy broads were always letting him down. But Ros showed promise.

Pointing his finger repeatedly at her nose, he continued his rant. "Miranda left me high and dry, so I'm sending you to pick up the pieces. You, I don't have to worry about. With that mouth, no one is going to be marrying you."

"Harry!" Ros yelled indignantly. "You're not painting a very enticing picture for me here. What if I don't want to go to Paris?"

Lasky stared at her incredulously. "Who doesn't want to go to Paris? Any one of those stooges out there would kill to go to Paris but none of them have what you've got."

With her natural skepticism starting to boil over, Ros leaned in closer and started jabbing Lasky in the shoulder with two fingers, slowly backing him up against the desk.

"I know what you're up to Harry," her tone low and threatening. "Miranda was on a fashion beat. That means to you the only thing I got that those mugs out there don't have, is boobs. It's another glorified gossip beat, you rat!"

"It's Paris! C'mon, every woman wants to go to Paris," Lasky shouted in his defense.

"That's not the point," Ros continued poking him. "I'm tired of going to county fairs. I'm tired of the only labor unrest stories coming my way having to be in washing machine factories. I'm tired of reporting on this ditzy socialite, and that boring dolt of a millionaire. I want a real beat like a real reporter, Harry. I can do the job just as good, or better, as those guys out there and I cost less."

"Stop trying to get on my good side," Lasky retorted, readying his counter attack. He hadn't expected this much of a fight. But he needed her and he couldn't run the risk of her bolting.

"Listen, give me a chance here. You're the only person I've got who can jump in and take over for Miranda. But you're also a hell of a lot better than she is... err, was. You won't have to work as hard to cover her beat. In case you haven't noticed, between the Nazis and Mussolini, there's one crisis after another going on over in Europe. I'm sure there's going to be some important stories Walter and our boys won't be able to get to. What you do with your free time is up to you."

Somewhere in there were a couple of compliments, but she wasn't going to let him twist free that easily. Paris did sound kind of nice, and he was throwing her a bone in the way of real work, but Ros was sure the beat would take up more time than Lasky was promising, and she wanted something else from him... for pride, and because she could. So Ros just silently stared Lasky down, daring him to add one more carrot to get her to sign on.

"Okay, and I'll throw in a raise," Lasky conceded after a long standoff.

"Done!" Ros threw her arm out to shake hands with Lasky to seal the deal. 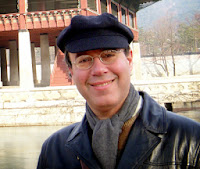 After years as a journalist and magazine editor, George T. Chronis decided to return to his lifelong passion, storytelling. A lover of both 1930s cinema and world history, Chronis is now devoted to bringing life to the mid-20th Century fictional narratives that have been in his thoughts for years. Sudetenland© is his first novel. Taking place during turbulent times in Central Europe during the 1930s, the book took eight years to research and write. The author is already hard at work on his second novel.

Chronis is married with two daughters, and lives with his wife in a Southern California mountain community.