Contract to Wed by Holly Bush - Spotlight and Giveaway

This post is part of a virtual book tour organized by Goddess Fish Promotions. Holly will be awarding a $25 Amazon or B/N GC to a randomly drawn winner via rafflecopter during the tour. Click on the tour banner to see the other stops on the tour.

1891 . . . Jolene Crawford Crenshaw, heiress and Boston socialite, went from her family home directly to Landonmore upon her marriage, the mansion she shared with her handsome and charismatic husband. She’d never in her life worried in the slightest over anything as crass as the dollars required to maintain that home or the lifestyle she’d been born to. Her extensive yearly wardrobe, the stables and the prime horseflesh within it, even the solid silver forks and knifes that graced her table, were expected and required to maintain the social standing that she’d cultivated over the years. But suddenly she was a widow with little money and just her pride and her secrets to keep her upright.

Max Shelby made his fortune in oil wells and cattle, but lost the love of his life the day his wife died. Now, his happy, carefree daughter needs instruction and guidance as she grows into a young lady and his dream of becoming a Senator from his adopted state of Texas seems out of reach with few political or social connections. The right wife would solve both problems. As it happens, his sister knows of a woman, a recent widow, charming, beautiful and socially astute, but in reduced circumstances, who may want to begin again. Max signed the wedding contract sight unseen.

Will Jolene be able to shed her sorrows, anger and fears to begin anew away from the censure and hidden tragedy that marred her life? Is her new husband, confident, strong and capable Max Shelby, the man, the only man, to see past her masks to find the woman beneath?

Max walked slowly to where a woman, dressed in black, was directing several porters stacking multiple trunks and luggage. It was a detail he’d not thought of. He turned to the depot manager who was watching the porters himself.

“Can you get word to the Shaw Brothers to get over here with one of their wagons?”

The manager nodded and hurried to his depot, and Max turned back. Apparently finished, four porters stood behind rows and stacks of luggage and trunks, staring up at the train. The woman dressed in black was waiting, and the conductor stood to the side of the metal steps between the cars. He lifted his hand up and at the top of those three steps appeared a tall, slender woman. She was dressed from head to toe in the palest blue, starting with the tilted, wide-brimmed hat, to her jacket trimmed in black roping to her bustled skirts. She extended a foot shod in a pale blue satin slipper and accepted the conductor’s outstretched hand.

At first glance, she was stunning and sophisticated and sure of herself. And he was certain she was his wife. He walked to her and held out his hand.

He bowed his head and touched his hat. “At your service, ma’am.”

She put a gloved hand in his, and he was immediately aware of her. He could smell a musky rose scent and felt the pressure of her hand in his as she came down the last two steps. 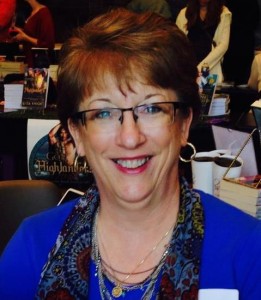 About the Author: Holly Bush writes historical romance set on the American Prairie, in Victorian England, and recently released her first Women’s Fiction title. Her books are described as emotional, with heartfelt, sexy romance. She makes her home with her husband in Lancaster County, Pennsylvania.