This post is part of a virtual book tour organized by Goddess Fish Promotions. Josh Powell will be awarding a $25 Amazon/BN GC to a randomly drawn winner via rafflecopter during the tour. Click on the tour banner to see the other stops on the tour.

Funny fantasy draws me in because first, I like to make people laugh. Josh is an apt name, because I’m always joshing around. I honed this skill throughout high school by saying things I thought were funny and watching the blank stares of people looking back at me. Occasionally, someone would laugh instead. I said more things like the thing that made people laugh, and less things that drew blank stares. Being funny also got me out of trouble, if my parents were laughing they were unable to dispense punishment for transgressions. It also got be into trouble, I was forced to write a letter in high school apologizing for skipping out on a liturgy (christian high school)... apparently apologizing for exercising my religious freedom was not what they were looking for. Oops.

I’m drawn to the fantasy component of funny fantasy, but I can’t tell you why. I’ve always been drawn into tolkeinesque worlds of excitement and adventure. There are advantages to fantasy, for example, you can discuss topics that would be otherwise taboo or start a heated argument but because it’s wrapped in a layer of metaphor people don’t get so wrapped up in defending their beliefs and can have a conversation about it. But that’s just a bonus, it’s not why I’m drawn to fantasy. I just am and have been from an early age.

That’s six questions wrapped up in one! I think the levels of research or world-building differ for these genres, at least they would for me. I’ve been so wrapped up on fantasy my whole life, that I’ve a firm grip on what my fantasy world looks like. For sci-fi writing, there is a focus on technology and decisions have to be made about where technology is at. Technology often becomes a character in the book, either literally like the ship in Star Trek having a voice, or metaphorically like the Death Star. Technology also defines a society, what kind of society would create a planet sized device made for destroying planets? My knee jerk reaction is to say an evil one, but I think almost any society with the capability to do it would. The US certainly would, and I don’t consider us an evil society (usually).

The four main characters in these first two books have been an exploration of different aspects of my personality for me. Gurken Stonebiter, the berserker dwarf is stubborn to the point of stupidity, when I’m hungry I get that way. Arthur Gimble, wizard of the tenth rank, is a stickler for grammar and can’t stand it when others make mistakes, restraining himself from correcting others only through heroic effort. Pellonia is the snarky, wise-cracking little girl and is the glue that binds everyone together. Maximina Nobility is someone that learns very quickly, but gets bored and wants to keep trying new things so never quite masters any one thing.

Both. I plot and outline, then write trying to keep to the outline but sometimes the characters or story won’t let me. And I usually get better ideas later that throw the outline out and force me to write a new one.

Dragon Apocalypse was just released, it’s the sequel to The Berserker and the Pedant, which was also released in 2015. I intend to keep writing at the pace of two books per year, which means this series will be finished in 2016 (it’s a trilogy) and the next one started.

Yes, how do you decide which book to read next?

On their way to apprehend a temple thief, Gurken Stonebiter, a templerager of the temple of Durstin Firebeard, and Pellonia, a little, but infuriatingly clever, girl stumble onto a quest to save a town from an evil dragon. The dragon is demanding sacrifices of maidens, and the town is fresh out. Can they discover a way to sate the dragon's bloodlust and save the town?

Along the way, Gurken and Pellonia meet up with Maximina, a half under-elven woman that also happens to be a tad psychic, a ranger with a dash of necromantic ability, a smidgen of samurai training, and just enough time living as a rogue to acquire the ability to sneak up on and stab a foe in the back. Maximina is full of clever ideas on how to gain a tactical advantage over her foes, and on occasion they even work.

During their adventures, Gurken, Pellonia, and Maximina face a snarky unicorn, do battle with a terrible frost giant, contend with a rival adventuring party bent on their utter humiliation, and confront the end of the world in the form of an evil sorcerer and a teeming dragon horde. Can they save the world one more time?

“We’ve run out of maidens,” the mayor told the crowd in the morning, shaking his head sadly. The mayor stood beside a wooden pole with chains and manacles attached to it. The manacles were empty. “I’m afraid that last night, the last maiden in the city, shall we say… disqualified herself.

“Trollop!” said a voice in the crowd.

“In about five minutes, the dragon will be here and we’ll all be scorched and eaten alive. Please, don’t panic. There’s nothing to be done.”

The people in the crowd looked around at one another.

“Can’t we still pretend she’s a maiden?” said a voice in the crowd.

“A good idea, for sure,” said the mayor. “But the dragon can tell these things, he’s got a unicorn with him. I’m afraid we’re doomed. Nothing to be done about it.”

“You can’t fool a unicorn,” someone in the crowd shouted.

“How about a male maiden? I’m sure we’ve plenty of those. Roger here, for example.”

“Sure, sure, we all believe that.”

“It’s no good anyway. The dragon quite prefers that the maiden in question be a woman,” said the mayor.

“The dragon’s really quite particular,” another voice criticized.

“What about a young maiden? I mean, technically, if we can just find someone young enough…” said someone in the crowd. He turned and looked at Pellonia, as did the rest of the crowd. 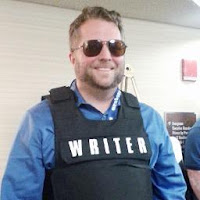 JOSH POWELL, wielder of the Sommerswerd, destroyer of the thread, expeditioner to Barrier Peaks, discoverer of his magic talent, and venturer into the Tomb of Horrors is known for having survived a harrowing adolescence full of danger and fantasy. He's gone on to write The Berserker and the Pedant and Dragon Apocalypse and is currently working on the yet to be named third book in the series.

He also spends some not inconsiderable amount of time wiggling his fingers over a keyboard as a software engineer. He lives with his wife, Marianne, and two amazing children, Liam and Chloe, in sunny California, where winter is, most decidedly, never coming.

a Rafflecopter giveaway n END -->
Posted by MJ Thomas at 4:00 AM