Yours Truly 2095 by Brian Paone - Guest Blog and Giveaway

This post is part of a virtual book tour organized by Goddess Fish Promotions. Brian Paone will be awarding a $25 Amazon/BN GC to a randomly drawn winner via rafflecopter during the tour. Click on the tour banner to see the other stops on the tour.


Five Things You Might Not Know About Brian Paone


1. I grew up living in a funeral home. Sleepovers as a kid at my house were always interesting. Either my friends would flat out refuse to sleep over, or the ones who would sleep over would sneak downstairs and play hide and seek in the empty caskets at 2 in the morning. I used to get in trouble a lot as a kid by “zooming” my Matchbox cars around the dead people’s faces… because that meant someone was going to have to fix the makeup again before the wake that night. Oddly, we moved out when I was a senior in high school, and the very first apartment that my fiancé (now wife) and I shared together before we got married, was back in the same funeral home in the same upstairs apartment. The experience has made me desensitized to dead people, they are just another piece of furniture to me, however, it also made me terrified of death, because looking at new dead people every day, year after year, in my house, made me really question what happens to us after we die.

2. I have webbed feet. Both toes next to the big toe, on both feet, are stuck together like one big toe. When I was born, the doctor asked if my mother wanted him to split them, and she asked if having it would impede me in anyway. When he said, no, she chose to keep my feet like that. My first novel, “Dreams Are Unfinished Thoughts,” is about my friendship with a rock-star who was a drug addict. His nephew, who I kind of adopted as a surrogate nephew after my friend died, has the same exact two toes, on both feet, webbed just like me. He’s the only person I’ve ever met who has the same 4 toes stuck together, and it’s because of his uncle that I’m even a published author in the first place. Crazy coincidences weird me out.

3. I was as close to buying a 1983 DeLorean as one can possibly get without actually buying one. I found a guy in NJ who was selling one for $30,000 and it was in almost mint condition. I had about $10,000 in a savings account and I contacted him and asked if he could hold it for me while I applied for a loan from a bank for the remaining $20,000. Well, my loan was approved for the rest of the money and my best friend and I were going to fly down to NJ from Boston and drive the DeLorean back to MA. Then, the Patriots made it to the Super Bowl. And I blew my $10,000 saved on going to the game (plane, hotel, car rental, Super Bowl tickets etc.) So I never got my DeLorean, even though I had the money and a seller. But, the Patriots did beat the Eagles in that game, so…..

4. I have this weird thing/tick that I do when I get super super super excited about something. But because I’m embarrassed about it, I will only do it in private. I will either wait until I am alone, or if I can’t wait, I’ll go into another room to do it. My wife says that its borderline Tourette’s because I almost can’t control it. It’s like I get so excited about something, that I don’t where to put that energy. Over the years I’ve learned how to do this tick discreetly while in the company of people so I can still get out that energy in a physical manner, but also so it doesn’t look like I’m having a stroke. Well, when my band, Drop Kick Jesus, flew to Texas to mix our 2000 album, “Depress The Heart,” I was alone in one of the studio rooms and got excited about a piece of music we had just mixed, and I did my “tick.” I had no idea my guitarist was outside the window. When he saw it, he was like WTF? He called the whole band over and they were all in the studio window watching me do my thing. I was so embarrassed that I made sure that my little tick was never seen by anyone accidentally ever again.

5. I’m a ninja. Seriously. My 6-year old and my 8-year old can’t get me down when we wrestle. And this week, I KNEW I was a ninja when my 14 month old crawled at me, and I took him down. BOOYA! Ninja skills. 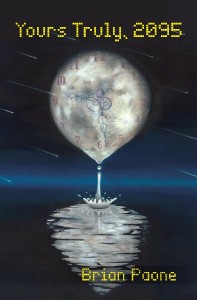 Jeff Blue-the victim of a time-travel conspiracy-wakes up trapped in the year 2095. The only familiar face is J0; a robotic copy of the wife he left behind in 1981. But can she be trusted?

J0 could be the only key to unlock Jeff's journey home, but it will require her to do something against her programming-something human.

During Jeff's perilous journey through the future, he will have to discover the truth about J0's origins, and solve the mystery behind how he wound up in 2095, in order to uncover the reality of his own destiny.

Armed with a one-way ticket to the moon, Jeff must race against the clock to seize what might be his last chance to return home to his time. A time without hover cars, Justice Computers, or TeleSkins-a time over one hundred years ago.

“Are you okay?” Julie asked through the window.

I was surprised I could hear her.

I was expecting her to answer with something snide and sarcastic, but she didn’t say anything at all. She just disappeared from my view. I leaned forward in the chamber so I could see where she went. Julie was standing in front of one of the computers typing on the keyboard very quickly. After a few moments I heard a hiss, and the cover swung open. I felt like a rising vampire as I stood up and stepped out of the pod.

I almost fell backward into the chamber when she turned around. Julie was missing half of her face. Where the left side of her face should’ve been was only wires and metal.

“This isn’t a dream, is it?” I asked cautiously.

“Who else?” J0 asked. She turned back to the computer and typed in some more commands. The hydraulics of another seclusion chamber hissed as its cover opened.

“Oh, no,” I said quietly and covered my mouth with my hand.

“I’m pretty sure. I already called the police. We’re going to meet them out front to let them in. They should be here in a few minutes.”

I took a step toward him.

“Don’t touch him!” she yelled.

I stopped in my tracks.

“Whoever did this was trying to kill both of you.” 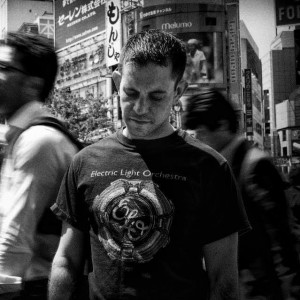 About the Author:Brian Paone was born and raised in the Salem, Massachusetts area. An award winning author, his love of writing began through the medium of short stories at the young age of twelve. After almost 20 years of consistently writing short stories for only his friends and family to read, Brian’s first full-length novel, a personal memoir about his friendship with a rock-star drug addict entitled, “Dreams Are Unfinished Thoughts,” was published in 2007. Brian’s second novel, “Welcome to Parkview,” was published in 2010 and is a macabre journey through a cerebral-horror landscape. Brian’s latest novel, “Yours Truly, 2095,” was published in 2015 and follows a man who wakes up one morning, trapped in the future, to discover he’s been the victim of a time-travel conspiracy. Brian is married and has 3 children. Brian’s wife is an Officer in the US Navy. He is also a self-proclaimed roller coaster junkie, and his favorite color is burnt-orange.