Shadows of the Highridge by Jay Swanson - Guest Blog and Giveaway

This post is part of a virtual book tour organized by Goddess Fish Promotions. Jay Swanson will be awarding a e-book of Shadows of the Highridge to a randomly drawn winner via rafflecopter during the tour. Click on the tour banner to see the other stops on the tour.

I’m currently sitting in the American Airlines Admiral’s Club in Paris, which sounds about three times more glamorous than it is, but the free croissants and Bailey’s do kick it up a notch. Here are five things you might not know about me (and I’m going to pretend you had an idea who I was before you started reading):

ONE: I’ve Lost 35 Pounds in Just Under Four Months.

I plan to lose a little more (and who knows, maybe I did while I was in France), but the end goal was 40 pounds by the end of 2015. I run about 20 miles a week now and try to pretend like I can lift weights when no one is looking. What makes the weight loss even more surprising is if you know something else about me:

TWO: I Eat in Restaurants 95% of the Time

Again, not nearly as glamorous as it sounds (in fact, food and I are on an emotional break at the moment). Eating in restaurants makes losing weight a bit more of a challenge as you’re never really sure what exactly it is you’re putting in your mouth. You hope it’s actually food. How did I do it? I counted calories and did my best to stay hungry.

Why eat in restaurants all the time (why not)? The same reason I traveled so much over the last two years: Work. But day jobs are boring interview material so let’s move on to something more fun:

THREE: I’m a Lord in the UK, But I Wasn’t Born into My Title

I’ll just leave that one as is; feel free to ask in the comments.

FOUR: I’ve Lived in Eight Countries (give or take depending on how you define “lived”)

Personally I don’t count Italy, though they do know how to live. Between North America, Europe, and Africa, I’ve spread out a little. The reason behind all this jet-setting is still a bit of a mystery, even to me, but I’d blame a large portion of it on reading the entire TinTin series as soon as I could form sentences without mouthing them silently to myself. So, like three months ago (shut up, Steve).

Suffice it to say that when I was little I fell in love with France and just never let it go. I taught English there after college, and again in the middle of my stint with Mercy Ships – a volunteer operation running the world’s largest private charity hospital ship. It was with Mercy Ships that I lived in South, Central, and Western Sub-Saharan Africa; how I saw the world, but not how I saw the country.

FIVE: I Took a State-Side Travel Job to Fund Into the Nanten

I didn’t know what project I would launch myself into when I got back, but I knew that I would need money for my future as a writer. I’m just too into production to leave my projects to someone else. I did this for the same reason that I chose to remain independent for so long: creative control.

Into the Nanten, the world’s first real-time fantasy blog, was born of a combination of my desire to reach a new audience, tell an episodic story, and process my experiences abroad (in a much more cannibal-infested manner). After a successful round at Kickstarter, I was able to launch a second season of Into the Nanten in September and a spinoff novel on Halloween: Shadows of the Highridge.

It’s a short fun read, and while you’re waiting for it to download (or get shipped to you) let me know in the comments one of two things: 1) What combination of inspirations do you think made the original creators cringe to see? 2) What’s one of the weirdest things that’s ever happened to you while traveling?

Moving along the soil is the quickest way to die; for Tolly to survive she must learn to stay silent. Life on farms like hers was difficult enough in the face of plague and a decade of drought, but something worse has come to the foothills under the Highridge Mountains. Something that will destroy everything she loves.

Mere miles away, Vanig’s search for water to revive his farm is cut short when soldiers arrive bearing dark news of disaster striking farms throughout the region – and they suspect he is the root cause of it all. Those suspicions spike when a disheveled warrior appears hundreds of miles from home and takes Vanig hostage.

Death looms in the shadows of the Highridge.

Tolly had never run so hard. The house was so far off. How could she make it?

The certainty grew within her: Time was short. Why was she so sure? She could feel the panic rise.

No, she thought. Bring them this way! But her lungs were already burning. She couldn’t yell any more. All she could do was run. Please, Nym, just listen.

“Little sister!” A Truan hand heard the commotion and came running from the other side of the house. “Little sister, stop! Kanda says it is not safe!”

Get out of my way, she wanted to yell. Run with me. But all of her air was spent on sprinting. The man was closing on her. She would have to dodge him somehow. She couldn’t let him stop her. He was ten feet away. Then the ground exploded beneath him.

Tolly fell, skidding to a halt as her skirts flew up around her. Scrapes burned along her thighs and up her backside. She heard screams behind her. The dust obscured her view. And then, through falling earth, she saw half of the Truan’s body thrown into the air by a tower of dirt.

No, not dirt, it was living. A snake. A worm. The monster was thicker than ten men standing together and jutted out of the ground twice as high. Three massive jawbones worked separately to hold the torso of the Truan in place. Whatever was happening within the mouth, Tolly didn’t want to see it. 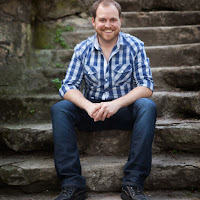 Jay Swanson is the creator of Into the Nanten, the world’s first real-time fantasy blog. He is also author of a spin-off novel, Shadows of the Highridge, the standalone short novel Dark Horse, and the Vitalis Chronicles trilogy. Jay grew up in Washington State, and has lived all over the world since then. Jay served for three years with Mercy Ships, a medical charity that runs the world’s largest private hospital ship, the Africa Mercy. In each country they visit, Mercy Ships donates free surgeries to the world’s forgotten poor, alleviating the suffering that so often accompanies a lack of access to medical care. He started in IT, then worked as the editor for their international Creative Pool, and finished as the on board Media Liason.

Paris will always have a place in Jay’s heart; he lived in France for two years, but he’s currently working in the US as a consultant on electronic medical records. Basically, he lives on planes.

Jay has a background in design and video production which have been instrumental in his self-publishing endeavors. Jay was telling stories from an early age, and latched on to video as soon as he discovered he could borrow people’s cameras. The stories that would one day become the Vitalis Chronicles began to take form in Jay’s head as movie ideas while he was still in college, and he began writing them down when he realized that they might make good books as well as films (and that if he died in Africa, there would be nothing left to prove they ever existed). He started writing White Shores in May of 2010 and finished on Christmas day of that year in Applesbosch, South Africa.

Buy the book at Barnes and Noble, Amazon, or Smashwords. a Rafflecopter giveaway
Posted by MJ Thomas at 4:00 AM