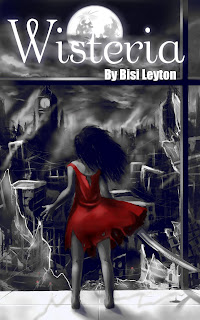 (A full length, dystopian/paranormal YA) 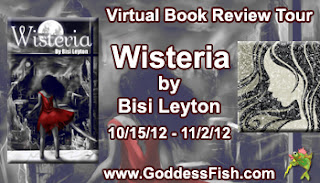 This review is done in conjunction with the author's virtual tour with Goddess Fish Promotions. The author will be awarding a $15 Amazon GC to a randomly drawn commenter during the tour, so comment today AND follow the tour (if you click on the tour banner above, it'll take you to a list of his tour stops) -- the more you read and comment, the better your odds of winning. You could be introduced to a great new author AND win a fun prize!

Sixteen year old Wisteria Kuti has two options—track the infected around the Isle of Smythe or leave the only known safe haven and face a world infested with flesh eating biters. But even with well-armed trackers, things go wrong and Wisteria ends up alone facing certain death, until she is rescued by the mysterious Bach. Uninfected, Bach is able to survive among the hordes of living dead.

Eighteen year old Bach, from a race known as The Family, has no interest in human affairs. He was sent here to complete his Great Walk and return home as a man—as a Sen Son. The Family regard humans as Dirt People, but Bach is drawn to this Terran girl, whom he has never seen before, but somehow knows.

Hunted by flesh eaters, cannibals, and the mysterious blood thirsty group called Red Phoenix, Wisteria and Bach make their way back to the Isle of Smythe, a community built on secrets and lies.

I wasn't entirely certain what to expect with this book.  It sounded as if it was full of twists and turns and secrets and, as it turns out, it was!

Wisteria is an impetuous teenager, full of all the angst most have, especially as she's not part of the "in" crowd, but has a crush on one of them (which is well known and mocked).  Her family is splintered, father presumed dead, and they survive in a safe haven called Symthe.  Outside of Smythe are the infected.  Zombies.

Wisteria is a tracker, like her mother, and they go outside to track the movements of the infected, count their numbers and, when necessary, "cure" them (slang for killing them).  Even here, where it is most dangerous, Wisteria is impetuous and her youth and inexeperience shows.  And once, it gets her into serious trouble, surrounded by infected and a certain death.

Until Bach sees her. Bach:  arrogant, entitled, and not the nicest of boys.  Part of The Family, they see Terrans as slaves to be "refreshed" (or brainwashed) and used how they see fit.  He doesn't want any Terrans around him, though. They killed his mother and he despised them all, which is why his feelings (and, oddly, memories) of Wisteria make no sense.

And so begins their adventure.

This story was a good one, with plenty of plot points to keep me intrigued.  The author's skill is certainly with description and she's able to clearly paint pictures of all the people and places Wisteria and Bach encounter.  However, this is also the one drawback of the story.  There are places it drags and I'd end up skimming pages waiting for the action to start again.  It always did, and it was frequently heart-stopping.  Wisteria and Bach are in nearly impossible-to-survive situations more than once and I had to find out how they'd make it through.

So, regardless of the slow spots, there were so many questions posed that I needed to know that I couldn't stop reading.  How did Bach remember Wisteria when they'd never met?  Who was the person who betrayed them to the Red Phoenix?  What was really going on at the Isle of Smythe?

The ending leads me to believe there may be more books forthcoming, and I look forward to seeing what this talented author will come up with next. 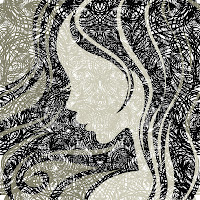 Bisi Leyton was born in East London in 1978. She grew up in London, Nigeria and the States, listening to the stories life and love from aunts, cousins and big sisters.She lives in London, but has worked around Europe including France, Germany, Ireland, Belgium and the Czech Republic. She has a fondness for reading graphic novels.

Bisi running a giveaway until 30 November for a Kindle Fire. When people sign up for her New Release Mailing list they get a change to win. The list is not for a newsletter, but to going a mailing list where they'll be notified once a new book is released and that is it.

The conditions are at www.bisileyton.blogspot.com and the link to sign up is http://eepurl.com/o8zv1.

Here is the rafflecopter for the kindle -- this is NOT for the tour giveaway. For that, you must leave a comment: a Rafflecopter giveaway
Posted by MJ Thomas at 12:01 AM