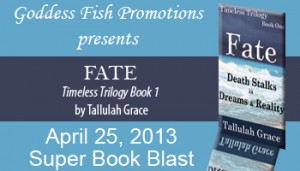 This post is part of a Virtual Book Tour organized by Goddess Fish Promotions. Tallulah will be awarding winner's choice of a backlist eBook to a randomly drawn commenter at every stop. Click on the tour banner to see the other stops on the tour.

Death stalks Kris in dreams and in reality. The target of a cunning serial killer, Kris must defend her life and her love. Visions prepare her for what’s coming, but is knowledge enough to change the future? Or will demented mania claim victory over fated love?

The good things in life are coming together for Kristina Collins. She’s found her ideal home, her career is on track for mega success and the man of her dreams has finally come back into her life.

In Fate, the first installment of the Timeless Trilogy, Kris Collins discovers the benefits and risks of having precognitive visions while being stalked by a serial killer. Her friends can’t help her, the FBI can’t save her; she must save herself.

The Timeless Trilogy heroines, Kristina, Veronica and Cassandra, each deal with paranormal abilities as they discover and rediscover eternal love.

The edge of the blade felt like ice against her skin. One breath too deep, one movement—ever so slight—would give the knife a taste of her blood. It’s a part of the nightmare, she thought, even as she felt the breath of her attacker lightly touch her face.

The nightmares that had been plaguing her for weeks warned of this moment. Images, too terrifying to be real, flashed quickly across her mind’s eye in an instant replay of her recent night terrors. Running down a long, empty hallway, filled with doorways on either side, chased by some unknown monster that knew her deepest fears. Running towards a movie, scrolling incessantly with images of those she loved most trapped in a fiery hell. Sepia-toned faces, twisted in pain, were a stark contrast to the blue, red and yellow of the flames engulfing them. The echoes of their screams filled the dark, never-ending hallway. She couldn’t look away and she couldn’t stop running; her only escape was straight ahead, towards the horror show.

So far, the nightmares ended with her sitting straight up in bed, breathing hard in a cold sweat. He hadn’t caught her yet.

The all too real feeling of cold steel pressed against her neck gave the nightmare an alternate ending. Kris tried to control her breathing so her attacker would think she slept. Her mind raced as she tried to think of a way to reach the loaded SIG waiting beneath the extra pillow beside her. She didn’t always keep a gun so handy, but recent events, including the dreams, made it a necessity.

“Wake up, Sleeping Beauty.” The familiar voice spoke the words softly in her ear.

Tallulah Grace is an aficionado of anything paranormal, loves to read a good thriller and creates characters that become friends. Tallulah was born and raised in a small southern town located in the foothills of the vibrant Blue Ridge Mountains. When she's not developing characters and weaving stories, Tallulah enjoys antiquing and bead-weaving.

Buy the book at: