Halo of the Damned by Dina Rae - Review tour and giveaway 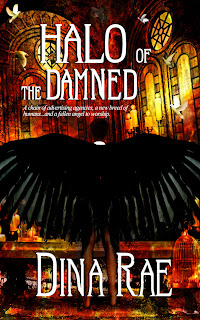 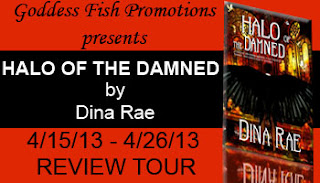 Dina is awarding one random commenter a new peacock jeweled necklace, so comment today AND follow the tour (if you click on the tour banner above, it'll take you to a list of her tour stops) -- the more you read and comment, the better your odds of winning. You could be introduced to a great new author AND win an awesome prize!

A chain of advertising agencies, a new breed of humans, and a fallen angel to worship...

Andel Talistokov is known for his slick advertising agencies across the globe. He is a fallen angel that uses advertising as a weapon for Satan's work. His growing power emboldens him to break several of Hell's Commandments. Furious with his arrogance, Satan commands him to return to Hell after finding his own replacement. Yezidism, an ancient angel worshiping religion, quietly expands throughout the West. Armaros appears as a guest of honor during their ceremonies. He mates with young women to produce nephilim, a mixed race of humans and angels. They are alone and unprepared for their supernatural power. Joanna Easterhouse, a recovering drug addict, steps out of prison shortly after her mother's fatal accident. She and her sister, Kim, unravel their mother's secretive past. Intrigued, they learn their bloodline is part of a celestial legacy. Both worlds collide. Halo of the Damned is a horrifying tale that weaves research together with suspenseful twists and turns.

Dina Rae takes the reader into a dark corner of the supernatural world-- the world of demons and nephilim. Andel Talistokov, one of the fallen angels who were thrown out of heaven when Satan rebelled against God, is taking a page out of Satan's book and wants to be worshipped instead of God ... or Satan. Joanna Easterhouse and her family discover they come from a long line of celestial beings who stand against the evil that Andel embodies.

The actions in this book start off dark and graphic--Andel kills his assistant, then partially devours her, and then we discover she was his daughter. And now we are completely aware at this point that his evil knows no bounds.

Dina Rae has a vast imagination and a way with words.  Her descriptions are clear and vivid (sometimes almost too much so).  If you have a weak stomach, this is definitely not the book for you. However, if you like a fast moving story --one that will keep you on the edge of your seat-- and enjoy being scared, give Halo of the Damned a try. One word of advice, however: don't read it late at night.

The next day, Kim packed up her own drawing of her mother’s carved wall, the scroll, and the piece of metal. Her excitement put her in a giddy mood. Once she was parked and in front of Loyola’s entrance, Sandra met her in the foyer and escorted her back to the Arts and Science College. Sandra took Kim to their lounge and introduced her to six other professors who were equally interested in seeing her finds. All of them specialized in fields that had to do with the ancient world.

Kim began with unveiling her own copy of the symbols she drew from her mother’s basement. “I appreciate all of your attention. Can anyone tell me what this is, and even possibly what it means? Each symbol was copied down in the order it was etched into the wall,” Kim said.

One professor immediately took the paper and made a copy. This made Kim uncomfortable. He asked, “Where did you find this?”

“Again, none of that matters,” Kim defensively repeated. Her daughter’s omen chimed throughout her brain. The man intuitively put up her defenses.

“Doctor Nrogbi’s English is somewhat limited. He’s not trying to be pushy or rude,” Sandra explained.

“This is Angelic script, also known as Adonite language, alphabet of the Ark, or even Enochian. It’s the first written language of this world. Angels used it to communicate with God. The first humans also used it before the Fall,” Doctor Nrogbi lectured.

“Before what fall?” Kim asked, very confused. How could Maria have known all of this?

“Before Adam and Eve sinned. Before they were kicked out of Eden. It pre-dates Hebrew, Sanskrit, Aramaic, and other ancient languages. It’s very sophisticated and difficult to translate. These symbols look like a key, invocation, or lyric. Let me get something off my bookshelf.”

While the doctor frantically flipped through several of his books, other professors rattled off bits and pieces of their own views concerning the script. Kim learned that Enoch didn’t name the language, but his name was chosen for it thousands of years later because of his communications inside of Heaven.

The professors spoke of John Dee, a famous mathematician, cartographer, and seer of Queen Elizabeth I. He had a revelation about angelic script and later recorded it. Sir Edward Kelley, his colleague, also witnessed the revelation and recorded additional symbols called Keys or Calls. Their legitimacy had been debated for centuries.

“Ah, I found it. What you have here is a Key. Angel script is read left to right. These symbols together are sort of like a prayer. A rough translation in English means, ‘Forever fallen is forever damned, until one can unlock from within.’ I wish I knew where you found this. The context would help cypher the meaning,” Doctor Nrogbi stated.

“Anyone have an inkling to what the passage could mean?” Kim asked.

“I can only guess that fallen is either man, as in Adam…or possibly angels, as in the Fallen that waged war with Satan against God. He and all his angels were cast down and forever damned. However, there is a loophole suggested-‘unlock from within.’ Don’t know, just a guess,” answered Doctor Barry Lowenstein, an ancient comparative literature professor.

“Kim, you said you had a few more items to show us. Can we see? The anticipation is gnawing away at all of us!” Sandra exclaimed.

“Okay, I have a scroll that might be of some interest,” Kim answered as she gingerly took it out of her purse and laid it down on a long table. All the professors’ jaws dropped in astonishment. They all hovered over the scroll, whispering theories of what it might be. Doctor Nrogbi quickly grabbed his cell phone and began taking photos. The rest of the professors followed suit.

“Tanned animal hide, probably lamb or ram, of the highest quality for ancient times. This must be dated as far back as 500 B.C., maybe even a 1000 B.C. We need to carbon-date this. It’s in perfect condition. What was this stored in?” Doctor Lowenstein questioned.

“It came in a box. I didn’t bring it with me,” Kim replied, feeling suffocated and wanting to leave.

“We could use a combination of steam and chemicals to remove the seal so that it doesn’t break. That way we could read the scroll. Can you leave this with Sandra for the next couple of days?” asked Doctor Litner, an art history professor and expert in document preservation.

Can you bring in the box? Can you take us to where this was found? Can you leave this for display? Can we take this to the Smithsonian? Can you, Can you, Can you...Kim’s head was about to explode. She wasn’t about to disclose the ornate metal she still had in her purse.

“I’ll call Sandra and we can do this another time. Thank you all for your help,” Kim abruptly announced. She packed up her things and rushed out of the university. Not paying attention, she almost got hit by a car. Once in her Lincoln Navigator, she calmed down. Rush hour traffic on the Eisenhower Expressway gave her time to process. 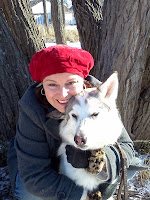 Dina Rae is a new author here to stay. As a teacher, she brings an academic element to her work. Her three novels, Halo of the Damned, The Last Degree, and Bad Juju weave research and suspense throughout the plots. Her short story, Be Paranoid Be Prepared, is a prequel of sorts to The Last Degree, focusing on the James Martin character. In the spring of 2013, her latest novel, Halo of the Nephilim, will be released. Dina also freelances for various entertainment blogs.

Dina lives with her husband, two daughters, and two dogs outside of Chicago. She is a Christian, an avid tennis player, movie buff, and self-proclaimed expert on several conspiracy theories. She has been interviewed numerous times in e-zines, websites, blogs, newspapers, and radio programs. When she is not writing she is reading novels from her favorite authors Dan Brown, Anne Rice, Stephen King, Brad Thor, George R.R. Martin, and Preston & Childs.