With Murderous Intent by Maggi Andersen - Review Tour and Giveaway 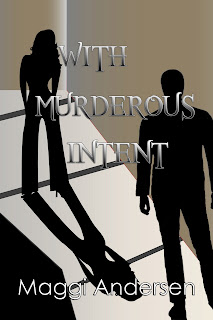 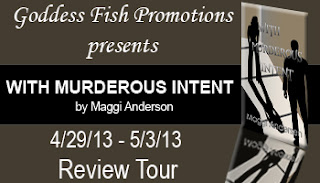 Maggi will be awarding a backlist eBook to one randomly drawn commenter and a $30 Amazon GC to one randomly drawn commenter during the tour, so comment today AND follow the tour (if you click on the tour banner above, it'll take you to a list of her tour stops) -- the more you read and comment, the better your odds of winning. You could be introduced to a great new author AND win an awesome prize!

To escape a deadly stalker, Caitlin Fitzgerald flees her home in Ireland and takes a governess job in the top end of Australia. In her chosen safe haven, she has poisonous snakes, spiders, and crocodiles to contend with. And the very handsome and moody station owner, Jake Monterey, to keep her awake at night. But not only is Caitlin at risk of losing her heart to Jake and his two adorable children, the danger she thought she’d left behind has found her again. Has she unwittingly placed the lives of those she loves in jeopardy?

I went into this book expecting edge of your seat excitement. I wish I hadn’t… because this isn’t that kind of book, and I think I might have enjoyed it more without those preconceived notions so I'd have enjoyed what the book was, instead of what it wasn't.  Even so, I never thought about stopping reading it ... I wanted to make sure Caitlin was okay and poor Jake was redeemed.

The book is really about the characters and they are good ones. Caitlin, a strong woman who leaves behind everything she knows to travel to and new job in a new country. Two children who’ve lost their mother in a tragic accident and whose father is remote and unavailable. Jake, the hero, who is still trying to get past the loss of his wife.

Caitlin is strong and honest. I liked her. I wasn’t overly fond of Jake at first, but I don’t expect we were meant to. He’s abrupt, callous and emotionally distant. But Caitlin slowly changes him—not because she thinks they’re going to be together (he has a girlfriend), but for the childrens’ sake.  The build up to their relationship's culmination is believeable and understandable.  Caitlin doesn't want to be attracted, and neither does Jake, but there is such a feeling of mutual admiration and, eventually, sexual attraction, that they can't help the slow slide into love.

The author has a good voice and a lot of skill with writing both characters and setting.  I really cared about our protagonists and hoped they'd be safe and happy, and I enjoyed the foray into Australia (and Jake's home, which sounded just lovely).  I like the writer's style and am certainly planning on reading some of her other releases because of it.

I do wish there had been more of a feeling of peril throughout, but we really don’t get that until the end. Still, the romance was sweet and the clear, vivid descriptions of Australia made this a good read.

4 Flowers -- This was a very good book! I'd recommend it to my friends

After they’d put the children to bed and were gathering up their toys, Jake said, “You know that pile of wood and bricks out in the yard?”

She nodded. Covered in creeper, they had obviously been there a long time.

“I had planned to build the kids a playroom on the cooler side of the house. I think I’ll make a start on the foundations tomorrow.”

“Perhaps I can help load the bricks into the wheelbarrow?”

“A brickie’s laborer?” Jake laughed. “Every building site should have one like you.”

She grinned at him. “You think I can’t do heavy lifting?”

He grinned back. “You’ll get blisters, and you’ll quit when you break a nail.”

“Oh!” She punched him on the arm and hurt her knuckles on his rock hard muscle. “Just because I don’t have muscles on my muscles, like you.”

He raised a brow. “I’m not complaining about the way you’re put together.”

There was a loaded pause.

“I’ll be up and ready when you are,” she said to fill it.

He shook his head and chuckled. “You think?”

The next morning she rose to the sound of hammering. She looked out at Jake working, stripped to the waist. For a moment, she drank in the grace and beauty of the man. The rippling muscles on his chest and back, shiny with sweat. His trim waist and long, lean legs in his cut-off jeans. His dark head as he leaned forward with the hammer, pounding away with rhythmic strokes. There was something primal about it, which made her draw a very deep breath. But he wasn’t building it for her.

Maggi Andersen and her lawyer husband are empty nesters, living in the countryside outside Sydney with their cat and the demanding wildlife. Parrots demand seed, possums fruit, ducks swim in the stream at the bottom of the garden, and the neighbors chickens roam their yard providing wonderful eggs. She began writing adventure stories at age eight. Three children, a Bachelor of Arts degree and a Master of Arts in Creative Writing degree later, her novels are still filled with adventure and suspense, but are also passionate romances. Georgette Heyer among others, brought inspiration to her seductive Regencies and she also writes darker, Victorian novels, contemporary romantic suspense and young adult.

She supports the RSPCA (The Royal Society for the Prevention of Cruelty to animals) and animals often feature in her books.