Rescue Me by Jody Vitek--Spotlight and Giveaway 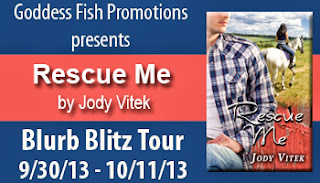 This post is part of a virtual book tour organized by Goddess Fish Promotions. Jody will be awarding a $20 Amazon Gift Card to a randomly drawn commenter during the tour. Click on the tour banner to see the other stops on the tour.

Can Catherine accept the consequences of a great-aunt's dying wish without losing her heart or independence?

Taking in stray, injured or needy animals, veterinarian doctor Catherine Mornelli opens the Four Hooves and Paws Rescue program. But the land where the animals are kept is being sold. She approaches her Great-Aunt Elaine about possibly using her barn. However, visiting her aunt and checking out the barn also means seeing her ex-boyfriend.

Josef Garrison farms land that once belonged to his family for generations but went to his neighbor Elaine after his great-grandfather lost it in a poker game to Catherine’s great-grandfather. When Catherine returns, he sees a way to win back her heart and the land at the same time.

Cat’s truck sat parked in the driveway among multiple vehicles. He didn’t know the entire family would be there, but then again he didn’t care. He had to know if she was carrying his child. He had to know if he was going to be a father.

He approached the front door and heard laughter. With a deep breath, he pushed the doorbell and heard, “Catherine, would you get that.”

The door opened. A startled gasp escaped her lungs while she placed a hand upon his chest pushing him back. “What are you doing here?”

It was obvious Margaret hadn’t told her he was coming.

“Your mother invited me.”

“She what? Why would she do that?”

Cat looked beautiful even if she was angry. Her eyes sparkled, and her skin flushed.

“You wouldn’t answer or return my calls. I called your mother, and before I knew it she invited me for dinner.” He reached to touch her. To feel her again.

But she pulled away before he could skim her skin. “You called my mom?” she questioned with a raised voice and then lowered to a near growl. “What did you tell her?”

“I didn’t say anything other than I was trying to reach you, and you weren’t getting back to me.” He stared into chestnut eyes. “We need to talk.”

The door flew open. “Josef,” Margaret exclaimed. “You made it. Come on in. Catherine, let him in.”

“I didn’t know he was the surprise guest this evening, Mother.” 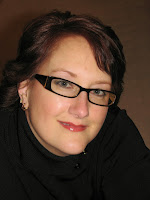 Born and raised in Minnesota, Jody remains close to home, living with her husband of more than twenty years as well as three children and a cat named Holly. Growing up, she enjoyed reading V.C. Andrews' Dollanganger series, S.E. Hinton and Stephen King to name a few.

She’s traveled throughout the United States, to the Bahamas and Cancun, Mexico. Between watching soccer games, scrapbooking and being the COO of the Vitek household, she writes contemporary romances.

You can find Jody on:

Facebook: Jody Vitek Author: https://www.facebook.com/pages/Jody-Vitek-Author/142820225824162
Twitter: @JodyVitek
and you can email her at: info@jodyvitek.com.
Visit www.jodyvitek.com to learn more about Jody.
To purchase Rescue Me visit: Melange Books