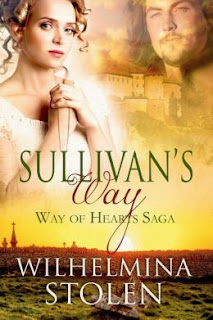 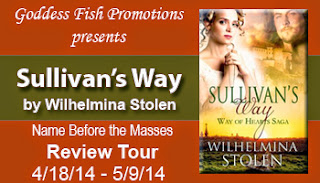 This review is in conjunction with a virtual book tour organized by Goddess Fish Promotions. Wilhelmina will be awarding a $25 Amazon GC to a randomly drawn commenter during the tour. Click on the tour banner to see the other stops on the tour.

A single day shattered her life and set in motion, events that would change the Sullivan family for generations.

Marnie Joe Sullivan had the perfect life as the daughter of a wealthy Virginia businessman, but perfection wouldn't last. As the War Between the States ends, she is struggling to keep her family together. After a botched robbery, fleeing rebels leave her mother dead and Marnie at the mercy of a killer. The year is 1867 and Virginia is still home to Confederate conspirators and a killer that must be stopped. Loyalty and love run deep in the Sullivan family and Marnie is no exception. As the eldest Sullivan, she feels obligated to rescue her father from the hangman’s noose. But a jailbreak at midnight lands her in the arms of Marshal Mason Kane.

Death is never fair. Mason Kane is proof of that. The horror of war and the death of his brother made him a drunk. Consumed by guilt and grief, he finds himself occupying Richmond saloons and starting fights. But a forgotten promise to his brother forces him to put down the bottle and accept a friend’s plea for help. Mason has no idea that the scrawny, mud covered boy he just hit is Sullivan’s daughter and he has no idea just how tempting she is until he tries to mend her wounds. Bound by honor and promise, Mason sets out to find a killer. What he finds is the outlaw Marnie Sullivan. A woman he can’t live without and secrets that lie in the way.

I love big sprawling family sagas, where you can follow a family over generations, and I have just found another such series to feed my addiction. This is the first book of the Way of Hearts series which introduces the family.

The story jumps right into the action, with Marnie Joe planning a jail break. She's not had an easy life for the past year--her mother was killed and she and her sister captured by renegade Confederate soldiers. I half expected this to be the second book of the series--I was sure that there was another book which told this story. Checking the author's website I found out that I was close--there is a book that tells this story, but it's not until book six in the series (that's very sneaky, Ms. Stolen!)

Mason Kane is asked by a friend to see what's going on with the Sullivan's and he discovers more than he expects.

Filled with mystery, passion, misunderstandings, and --above all else--deep and abiding family love, Ms. Stolen has penned some characters who are very real and very engaging. They are definitely not perfect, but that's what makes them so interesting. This reader became very invested in them--to the point where she stayed up reading way too late!

The secondary characters were equally s well-drawn as Marnie and Mason. And, I was excited to see that the next book features two of these characters. There's a mystery surrounding Lucas and I can hardly wait to find out what it is. Hopefully some of it will be revealed this fall.

Good job, Ms. Stolen. With this one book, you have gone on my auto-buy list!

Clear light made its way over the mountains, pouring into the valley, and a briskness clung to the morning air. Mason looked out over the porch railing at his first real look at the Sullivan place. Dawn had brought the land to life, and he could see at least ten houses scattered along the road. A horse and wagon galloped across the small wooden bridge. The saw mill that sat to the left began to scream as wood hit metal, and across the dirt road, children ran laughing into the church house that doubled as a school.

The land was small, but self-sufficient. With a little work, this settlement could be a thriving town. No wonder Talon wanted the place. Mason’s eyes followed the road as it curved and veered off to the right, into the tree line. Bright fingers of light climbed their way over the mountain and grabbed his attention. The top half of the mountain was nothing but massive boulders that dwindled off into the vegetation on one side, while the other side dropped a couple of hundred feet to the valley floor. He closed his eyes and lay back against the rocker. His mind went back to Marnie. That was her name. He ran his tongue over his lips, catching a hint of her sweetness. His hands opened and closed against his thighs. Thoughts of her made his hands tingle. His mind ventured back to the cabin, back to her body in the firelight. Mason could feel his body began to ache with need. Slowly, he opened his eyes and glanced down at his body. He rubbed his face and sat up. Damn frustrating! 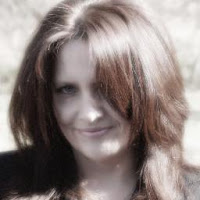 Wilhelmina Stolen is the pseudonym for romance writer, Shannon Hayes. Shannon is a native of Kentucky and makes her home in small southern town close to the Tennessee line. During her adolescence, her mother's free spirited nature became restless causing the family to embark on a slew of adventurous moves across the country. The moves provoked a hunger for adventure and romance and introduced her to a wonderful world of history and beauty.

As with most writers, her stories began at an early age with long sessions of seclusion and secrecy. While her classmates and friends were outside playing, Shannon was locked away in her room hammering out ideas on an old 1940s Royal typewriter.

After finding Mr. Right, Shannon found herself wanting the comfort and security of the small Kentucky town she longed to escape as a child. Fortune smiled upon her and she became the family historian; gathering pictures,wills, marriage certificates and everything else that somehow managed to fall into her lap. Stories flooded her mind and writing quickly became an obsession that turned into the Way of Hearts Saga. The saga spans six generations and three families.

Shannon holds an Associates in Applied Science in Technology, a Bachelors of Science in Business Administration and Management as well as a Masters in Educational Leadership. Visit her author page at www.wilhelminastolen.com to learn more about the saga.