This post is part of a virtual book tour organized by Goddess Fish Promotions. The author will be awarding a $50 Amazon or Barnes and Noble gift card via Rafflecopter. Click on the tour banner to see the other stops on the tour.

Anthem’s Fall has elements of both sci-fi and fantasy, so it can be said that my favorite genre as a writer is anything fantastical. I love all genres, and my bookshelf is quite eclectic, but when it comes to writing my own works, I’m exclusive to scifi/fantasy. For me, those are the genres that place a focus on the integration of imagination.

Empathy is at the heart of every novel, but only in sci fi/fantasy is imagination also a key component. The way I see it, if I’m going to be making stuff up, I might as well go all the way and create entire worlds. Why set your goal at a base hit when you can swing for the fences?

A large portion of the “science fiction” I introduce in the New York side of Anthem’s Fall is loosely based on the work of Craig Venter. He’s a famous synthetic biologist who created an artificial cell in 2009. Yes, you read that correctly. It came as a shock to myself when I read about Craig Venter’s work. He’s the scientist who was in charge of the Human Genome Project, and he does some pretty out-there research.

I read every book of his and some other big scientists in the field of synthetic biology in order to make my science fiction come as close to real science as possible. Of course, I push the real science into the realm of fantasy, but the influence behind the Vatruvian cell lies in currently accepted theories of synthetic biology. I actually made a document that goes through my in-text insinuations and dialogue lines about the Vatruvian cell and defends it with real quotes made by current scientists. Again, I push the technology beyond the boundary of fiction over the course of the novel, but the foundation is there.

We are in living in a world much closer to a science fiction novel than we think!

Kristen is a brilliant synthetic biologist working toward a PhD. The issue I ran into while writing her scenes was that…. I’m not a brilliant synthetic biologist working toward a PhD! It took a lot of editing and a lot of care to make sure I didn’t weaken her character with my words. Writing through the perspective of a scientist (in an otherwise real world) is not easy. I learned the tenuous art of “less is more” in the course of endless rewrites and the reproaches of friends who actually are pursuing PhDs in biology and chemistry.

My goal was to have Kristen come off as genuine, but not have readers running to dust off their old biology textbooks.

I rarely write for longer than an hour a sitting. My mind wanders off too quickly, so my writing process is a constant cycle of sitting down to write and then getting up to change locations or to get the blood flowing. I personally think writing is far too taxing to simply sit down and write for five hours straight. I wish I could, and I’m jealous of writers who can!

A little bit of both. When I began Anthem’s Fall, I started with the characters along with a few down-the-road plot points and went from there. But once the words started flying, the story and the characters ended up telling the story. I found that a lot of the scenes I outlined early on had to change because I realized a given character would never act so foolishly or cruelly etc.

You can only plot so far, and once you actually reach page 300, you generally find some of your characters have changed from your original concept.

A two foot long wrought-iron Viking Longship that I found at a consignment store this winter. It was the find of a lifetime. I peeled a tiny “Made in China” sticker off the bottom and now it looks like it belongs in a Scandinavian museum.

Anthem’s Fall is scheduled for release on July 31, 2014, so I’m busy with launch prep these days. I also have a few unrelated shorter works planned for release over the summer, and every day I get closer to finishing the first draft of the sequel to Anthem’s Fall.

I’m always giving away free copies of Anthem’s Fall on my website, so don’t be a stranger! Come aboard and sign up for the newsletter to stay up to date!

Yes! I’ve found that no two people discover new novels the same way. I myself usually try out a fresh book or author based on the recommendation of friends. I’d love to know how your readers discover new authors? I’m sure this blog is one way, but I’d love to hear how readers go about finding new stories and novels. Thanks! 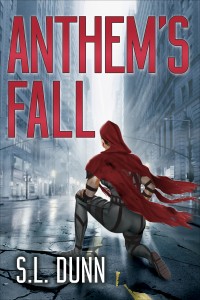 Above a horrified New York City, genetics and ethics collide as the fallen emperor and a banished exile of the same herculean race ignite into battle over the city’s rooftops. In the streets below, a brilliant young scientist has discovered a technology that can defeat them both, yet might be more terrible than either.

Set both in modern New York City and in the technologically sophisticated yet politically savage world of Anthem, Anthem’s Fall unfurls into a plot where larger than life characters born with the prowess of gods are pitted against the shrewd brilliance of a familiar and unlikely heroine.

“Yes, Lord Vengelis!” the boy called, but suddenly froze with fear. The boy began trembling, his chest convulsing in terror. Vengelis slowly turned and looked in all directions. Hysteria was rampant; men, women, and children were running every direction, many horribly wounded. None of them were soldiers. The fire was blazing out of control, and the entire block was immersed in raging flames.

A woman standing nearby, just below a broad tilted awning, remained unscathed. Her appearance contrasted strangely with the mayhem around them. She was thin and average sized, of Royal appearance, with blonde hair and bright blue eyes. Tattered ribbons of the awning and bits of orange cinders and ash blew all about her. She was smiling at Vengelis, her teeth white and perfect. Vengelis was taken aback.

Vengelis squinted through the billowing ash and felt an eerie sense of disquiet surface within him. Her eyes were not quite right. There was a glowing property to her stare, as though her eyes were emitting a strange blue radiance. She was beautiful, but the serene way she was smiling in the midst of the madness was peculiarly horrifying.

“State your name and rank!” Vengelis called out.

The boy stifled a small cry as the woman’s smile broadened. Vengelis glared and turned his attention from her to the boy. In a corner of his mind he already knew he was speaking to one of the Felixes. She moved her unsettling gaze from Vengelis to the boy. The boy let out a terrible sob and released the soldier he had been dragging. The woman took a step closer to the child.

There was no longer any doubt in Vengelis’s mind.

The woman whirled into motion, dashing toward the boy and reaching for his throat. The boy flinched and locked his eyes shut, expecting instant death. But it did not come. He peered through his trembling eyelids after a moment passed. The woman was still reaching for his throat, though now just in front of him. Vengelis had closed the distance and grabbed her wrist with his left hand, stopping the strike in its tracks. Her fingernails were reaching out longingly, inches from the boy’s neck. The woman turned to Vengelis, her expression vacant.

“Huge . . . mistake,” Vengelis growled through gritted teeth, his knuckles white from the vice grip on her wrist. “Get out of here, kid.”

About the Author:S.L. Dunn is the debut author of Anthem’s Fall, a novel he wrote amid the wanderings of his mid twenties. He has written while living intermittently in St. John USVI, Boston, Maine and Seattle. Raised on big screen superheroes and pop science fiction, he sought to create a novel that bridged a near-sci-fi thriller with a grand new fantasy. He currently resides in Seattle with his girlfriend Liz and their dog Lucy, and is hard at work completing the next book of the Anthem’s Fall series. Get in touch at www.sldunn.com.