The Eyes Die Last by Teri Riggs - Spotlight and Giveaway

This post is part of a virtual book tour organized by Goddess Fish Promotions. Enter to win a $50 Amazon or Barnes and Noble gift card. Click on the tour banner to see the other stops on the tour. 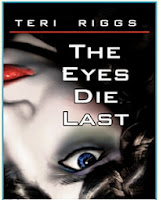 The Las Vegas Mayoral race is heating up, and the incumbent doesn’t have a prayer. Wealthy real estate speculator Nick Campenelli, who wants to legalize prostitution in Clark County, and former pastor Louis St. Louis, running on a 'clean-up-Vegas-by-getting-rid-of-the-whores' platform, are the front runners.

They’re also front runners on the suspect list for a string of murders. Kennedy O’Brien, four-year detective with cop blood running in her veins, and her partner Wilder “Wild Thing” James, a veteran, are determined to find the man who’s murdering prostitutes who work the wrong side of the street, and they don’t care how important or politically active he is.

The killer is a man with a mission. He stalks the women before he kills them, leaving a “BEFORE” photo on their bodies, and sending an “AFTER” shot to the local news hound. Ed Hershey, an aging newscaster with just the right amount of grey in his hair, is determined to turn this story into a network gig, and his interference, along with the LVTVS legal team, are making Kennedy and Wilder look bad. Campenelli’s good looks and charm, and St. Louis’ vitriolic hatred of prostitutes are muddying the waters too, and now the killer seems to have taken a liking to Kennedy.

So the big question remains. Can she get him before he gets her?

THE CALM MIDNIGHT SKY DID LITTLE TO LESSEN THE BRUTAL AND UNRELENTING LAS VEGAS HEAT THAT ENGULFED HIM AS HE STOOD WATCHING FROM THE SHADOWS. Sweat, mixed with anticipation and fear, made his cotton dress shirt stick to his back. Adrenaline pulsed through him, blurring the flashing neon lights in his peripheral vision into distorted, iridescent streaks of color dancing across the sidewalks. He rubbed his clammy palms together as he watched a woman step from a Mercedes onto the littered curb.

With a quick tug on the rough denim, she straightened her tight, micro-mini skirt and, placing a hand on each side of her jewel-trimmed halter top, jiggled her size double-D’s into position. Smiling, she tucked a wad of bills into her tiny purse and waved as the dark sedan sped away.

His heart pounded an erratic rhythm in double-time against his chest wall and small beads of perspiration dotted his forehead. He wiped his moist hands on his pants and approached her, head down, shoulders hunched.

“How much for twenty minutes?” He tipped his head in the direction of the alley. “Over there, standing up.”

Her eyes widened, bright purple eye shadow sparkling in the light of a passing car. “Standing up? You like it a little dirty, do you?”

He eyed the creamy breasts overflowing from her halter top. “Don’t we all?”

The woman shrugged, and for a few seconds he could see the boredom in her gaze. She looked down at the sidewalk and back up at him. Then she smiled.

“You’re in charge, boss. Twenty minutes, fifty dollars. Cash up front and I have a strict policy about condoms. I only use my own. A girl’s gotta protect the merchandise.”

He closed his eyes, savoring the moment that would propel him into greatness. When he opened them again, he could tell by the look on her face she thought he was mulling over the price. He’d go along with it. “Fifty dollars up front?”

“Take it or leave it. Hooking this side of the county line is illegal, you know. I’m taking a risk.” She ran her hands slowly over her double-D’s and wiggled her ass. Her voice purred, “As you can see, I’m not a blue-light special.”

He looked down one side of the street, and then the other. He studied the alley for a moment, and then looked her over again, slowly.

“I’m worth every penny.”

Did the whore actually think he’d find that sexy? “Yes, love. I can see how much you’re worth.”

“Well then make up your mind.”

He pulled a fifty from his pants pocket and handed her the cash. “Of course I’ll pay you what you deserve.” Pushing past her, he walked into the dark alley, rolling up the long sleeves of his once neatly pressed dress shirt.

“Thanks, sugar.” She folded and then tucked the cash into her purse.

He looked over his shoulder at her. “So how about you get that sweet, fifty dollar ass of yours over here?”

She followed willingly and when they stopped, stood face to face with him. The stink of cheap perfume smacked him in the face and his stomach muscles tightened. His voice roughened.

Teri Riggs was destined to be a writer. As a small girl she didn’t read bedtime stories, she made up her own. Who needed Little Red Riding Hood or The Three Little Pigs when there were so many great tales bouncing around in her head? When she grew up and became a mother to three little girls, she continued the tradition of making up bedtime stories. On the occasions she chose to tell conventional fairy tales, Teri usually gave them a bit of tweaking here and there or added a new ending. Her girls loved it.

After her daughters had the nerve to actually grow up and leave home, Teri discovered she had a passion for writing and jumped right in. It came as no surprise she chose to write mysteries and happily-ever-after’s since that’s the genres she loves to read.

Teri lives in Marietta, Georgia with her husband, one of her daughters and two dogs that seem to think they rule the world. And some days Teri thinks maybe they do.

Teri still frequently tells herself stories as she falls asleep. The only difference now is she wakes up the next morning and turns her bedtime stories into books.