Essence of Time by Liz Crowe - Q&A and Giveaway

This post is part of a virtual book tour organized by Goddess Fish Promotions. Liz will be awarding a $50 Amazon GC to a randomly drawn winner via rafflecopter during the tour. Click on the tour banner to see the other stops on the tour.

Welcome back, Liz! If someone were writing a story about you, what would your blurb say?

After nearly forty years spent as supportive trailing spouse to a successful auto executive, Liz has found her niche and reinvented herself. Now, beer, books, and sales of both drive her busy, full life. But when she’s pulled into a meeting and told she is being let go from the brewery she helped found, it sends her into a tailspin of regret and on a path of choices that will change her life forever.

ESSENCE OF TIME is the first of 3 “stand alone” novels within the top-selling Stewart Realty series. It tells the story of Blake and Rob, business partners and lovers introduced in books 1-3 (Floor Time, Sweat Equity, Closing Costs). What you don’t realize in those first 3 books is that Rob was Jack Gordon’s best friend in college and he harbors as dark secret that keeps him from connecting emotionally with anyone—until he meets Blake (who is Sara Thornton’s brother).

And what starts as a “menage of convenience” for procreation (Blake and Rob hire Lila as surrogate mother for their child) becomes an intense, emotional love story between three people that ends in a such a way that has many of my biggest fans STILL cursing me—but at the same time claiming that before reading ESSENCE OF TIME they would never have considered reading a book about “men in love with each other” and that this novel is about human nature, honest emotions and the consequences of the choices we make.

Oh, there are lots of them but I think the one that stands out it the split second that Rob realizes his best friend, former man-whore, Jack Gordon has fallen hard for Sara Thornton, Blake’s sister.

(Jack speaks first. The men are sitting at a bar over a couple of beers)

“Well, I, you know, did my usual thing. We christened her office. I figured, okay, one and done on that. But, I ah… Oh shit. I don’t know. She’s … I can’t stop thinking about her. She’s a god damned, sarcastic, high-maintenance bitch I’m sensing, but…”

Rob gulped his second beer and motioned for another. His brain refused to process what was about to happen. How fate or karma or some other quirk of the universe was about to rock all their boats so hard they might never recover.

Jack looked up at the ceiling and Rob knew at that moment he could only be talking about one woman. Words shriveled up, unsaid, in his throat. Jack leveled his blue gaze at him. “Shit, man, I am hooked.” Jack stared straight ahead. Rob’s head pounded in time with his heart. “I’ve never felt…”

“She have a name, this goddess?” Rob interrupted him, unable to stand it a minute longer.

Jack turned to him, his gaze serious. “Sara.” His eyes said the words: “I’m pretty sure you know her already.”

Rob stared at his friend, as the sheer improbability of this twist coursed through him. Blake was going to have kittens. Then, he would likely try to kill one of Rob's oldest friends. And he could thank himself for part of that, having created the “Jack Gordon” mystique in Blake’s head somehow. He put a hand on Jack’s shoulder.

“Yeah,” Jack parroted his earlier mantra. “I suppose we do.”
If you could trade places with one of your characters, who would it be and why?

Well, I guess the obvious answer is “Lila Warren” but only for a portion of the novel. You will see why when you read it.

Thanks for having me! I hope you all get a chance to read ESSENCE OF TIME soon!

A “take life by the throat” philosophy has always served Rob well. It keeps him focused, forcing emotions and potential relationships to take a back seat to his aspirations. But once every obstacle has been conquered and he’s achieved his goal—executive chef at a famous Chicago restaurant—he must acknowledge that he has reached his mid-thirties very much alone.

Blake has just jettisoned his dream job—head of a fast-growing craft microbrewery—to escape from the woman who shattered his soul. Arriving at a Chicago beer festival prepared to drown his sorrows before moving on he is miserable and numb.

Fate throws the men together altering their respective worlds forever.

Once Rob reveals the personal demon that has haunted him for years, Blake allows himself to fully trust again, and admits he wants a child. But a mutual attraction evolves out of a business arrangement with the woman hired as their surrogate, which has the potential to destroy an already delicate status quo.

But time is of the essence, and becomes the one luxury they don't have.

An honest depiction of a modern relationship mosaic reminding us to treasure every single moment we are allowed to love and be loved. 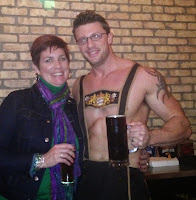 Amazon best-selling author, beer blogger and beer marketing expert, mom of three, and soccer fan, Liz Crowe lives Ann Arbor. She has decades of experience in sales and fund raising, plus an eight-year stint as a three-continent, ex-pat trailing spouse.

Her early forays into the publishing world led to a groundbreaking fiction subgenre, “Romance for Real Life,” which has gained thousands of fans and followers interested less in the “HEA” and more in the “WHA” (“What Happens After?”). More recently she is garnering even more fans across genres with her latest novels, which are more character-driven fiction, while remaining very much “real life.”

With stories set in the not-so-common worlds of breweries, on the soccer pitch, in successful real estate offices and at times in exotic locales like Istanbul, Turkey, her books are unique and told with a fresh voice. The Liz Crowe backlist has something for any reader seeking complex storylines with humor and complete casts of characters that will delight, frustrate and linger in the imagination long after the book is finished.