Christmas at the Cove by Rachel Brimble - Interview and Giveaway

This post is part of a virtual book tour organized by Goddess Fish Promotions. Rachel will be awarding a $20 Amazon GC to a randomly drawn winner via rafflecopter during the tour. Click on the tour banner to see the other stops on the tour.

Welcome to It's Raining Books! What are 5 items you never leave home without?

For your own reading, do you prefer ebooks or traditional paper/hard back books?

Both! I tend to read hard backs & paperbacks in bed or the bath and use my Kindle whenever I am out and about, including while on my daily walk with my black Lab, Max.

What is your favorite quote?

“Set it up the way you want it to be.” Iyanla Vanzant

What advice would you give to aspiring writers?

Write and read A LOT! The only way to learn the art of writing is to write and read as much as possible. Keep going, keep submitting and you will be published. The only failed writer is the writer who gave up. If you are a romance writer, I highly recommend writers join the Romance Writers of America and enter their many contests that offer feedback on your work. Also, enroll in some online writing courses. I learned everything I know by doing this and it’s served me well.

Which writers inspire you?

Do you have a favorite snack/drink while you write?

I don’t really eat while working but I always have coffee and water not too far away.

Do you write in silence or do you have background noise?

I need silence when I’m creating but can edit or do promo work with the normal household chaos going on around me!

If you met the characters from Christmas At The Cove do you think you would be friends or foes?

I would most definitely be friends with my hero and heroine, Scott Walker and Carrie Jameson, but there are also a lot of secondary characters that I wouldn’t. As far as foes, I think Amanda Arnold would take awhile to win me over…

Scott Walker doesn't have time for a relationship. The sexy mechanic has career ambitions, not to mention a mother and three sisters to take care of. The last thing he needs is Carrie Jameson, the beauty he never forgot, arriving in Templeton Cove over the holidays with some unexpected news.

Scott still finds Carrie irresistible, and he's not one to shirk responsibility. Scott's issues with his own dad make the prospect of parenthood a minefield. But if he and Carrie can overcome their fears, this Christmas could bring them the best gift of all.

She glanced around the garage. “I’m sorry to turn up unannounced like this, but I’m here and we need to talk.”

He stared at her in disbelief as questions, demands and weaknesses hurtled around inside him, battling with the intense sexual frustration storming through his body. “Just like that, you turn up and say, ‘We need to talk’?” He shook his head and turned away from her, lest he get caught in the snare of her wide, impossibly gorgeous eyes. “Go away.”

Keeping his back to her, he uncrossed his arms and planted his hands on his hips. He tipped his head back and smiled as insanity rushed his bloodstream. He wanted to grab her, shake her, kiss her and make love to her. God, he wanted to drop to his damn knees in front of her and beg her to tell him where she’d been and now she was back, was she back for good?

He closed his eyes, barely resisting the urge to cover his ears with his hands and block out her tempting voice, achingly laced with the unmistakable sound of a plea. “Whether you want to see me or not, I have to talk to you, and I won’t leave the Cove until you hear me out.”

Her heels clicked closer and his body tensed, waiting for what came next. The dangerous, musky scent of her perfume wafted under his nostrils and he inhaled. She approached the bench beside him and put down a business card. “My number’s on there. I’m staying at the Christie. Call me when you’re ready to talk. It’s important or I wouldn’t have come.”

He glanced at the card. Carrie Jameson. Producer.

She turned and walked away. He let her go, feeling like a smashed up car after a hurricane, tossed and turned through the air before being spewed crudely across the highway, left to rust and burn.

He picked up the card. His hand shook and the rare sting of tears shamed him. What the hell was he supposed to do now? Carrie was back and his libido told him only too clearly there was no way in hell he wouldn’t go to her. How was he supposed to let her go a second time when he’d lived the last three years regretting he didn’t stop her the first time? 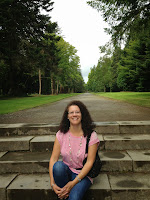 Rachel lives with her husband and two young daughters in a small town near Bath in the UK. After having several novels published by small US presses, she secured agent representation in 2011. In 2012, she sold two books to Harlequin Superromance and a further three in 2013. She also writes Victorian romance for Kensington--her debut was released in April 2013 and she has since signed for three more.

Rachel is a member of the Romantic Novelists Association and Romance Writers of America. When she isn’t writing, you’ll find Rachel with her head in a book or walking the beautiful English countryside with her family and beloved black Lab, Max. Her dream place to live is Bourton-on-the-Water in South West England.

She likes nothing more than connecting and chatting with her readers and fellow romance writers. Rachel would love to hear from you!