The Unholy by Paul DeBlassie III - Guest Post and Giveaway 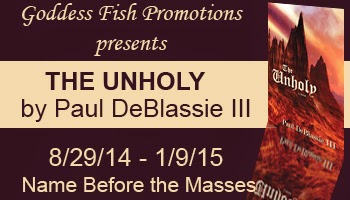 This post is part of a virtual book tour organized by Goddess Fish Promotions. The author will be awarding a $25 Amazon or Barnes & Noble GC to a randomly drawn commenter during the tour. Click on the tour banner to see the other stops on the tour.

Thanks for stopping by It's Raining Books. Why do you write in your genre? What draws you to it?

I’m drawn to the paranormal because of my interest as a depth psychologist in the deep unconscious mind. There are archetypal energies running rampant in the unconscious, in need of humanizing and in need of us coming to terms with them. Simply put, a supernatural thriller excites the sense of mystery and the unknown---that draws me to it!

The research that I do is birthed out of years of treating patients in psychotherapy and learning the magic of the unconscious mind and then translating that dramatically to the novel. In order to suspend disbelief regarding the supernatural, there has to be enough of the blood and guts human factor present. It’s the pain of people who suffer like we do that makes a story believable. Pain and identifying with it helps us to move into the world of the character. In the case of The Unholy, it is a world in which the natural and supernatural are blended seamlessly.

Name one thing you learned from your hero/heroine. Each of the characters in The Unholy, good and evil, present remarkably intense aspects of their personalities that can be learned from. As far as the protagonist, Claire, the young medicine woman, I’d say the fact that her life is on the line and her psyche is haunted by destiny is so frightening and inspirational that what she has to teach all of us has to do with truth to self or forever being haunted by ghosts from the past.

I have very weird writing habits that I cannot divulge because they involve conjuring secret energies that must remain enigmatic, occult, and ultimately unspoken. It’s not that I don’t want to talk, to share my rituals, but there’s some kind of fear about doing it that grabs me, whispers in my ear, and says don’t speak of this. So, in order to keep the writing mojo white hot, I gotta respect the need to remain silent about my secret writing rituals.

The process of writing for me involves hitting the page running because ideas have been germinating and pressing to be birthed for at least two years before I start a piece of nonfiction in psychology or a paranormal thriller. By the time, it moves from my head to the page I am white hot. Ready to go, getting it done, then cleaning up (editing) afterwards is how I do what I do with a paranormal thriller such as The Unholy.

Look to your right – what’s sitting there? OMG…it’s Dark Goddess sitting directly to my right. This is the paranormal thriller I am in the midst of finishing, should be completed within the year. It’s a novel of love and is bad love better than no love? That’s the question and the story of Dark Goddess will be hitting the literary streets sometime in 2015.

I have a couple of questions: Have you read The Unholy?; Do you need an answer as to what may be haunting your life?; Are you ready to take a chance and discover that what you thought was good in life is really other than that?

A young curandera, a medicine woman, intent on uncovering the secrets of her past is forced into a life-and-death battle against an evil Archbishop. Set in the mystic land of Aztlan, The Unholy is a novel of destiny as healer and slayer. Native lore of dreams and visions, shape changing, and natural magic work to spin a neo-gothic web in which sadness and mystery lure the unsuspecting into a twilight realm of discovery and decision.

“Help me? Help yourself! Face what is yours to face,” Elizabeth hissed. She yanked the door open then forced it to slam behind her.

Claire stood still for a moment, feeling as if a tornado had swept through the room. Elizabeth’s demand had left her shaken. She drew a deep breath, then went to her desk and picked up her tea, noticing her trembling hands.

Turning toward the window, Claire saw a muscular orderly accompanying Elizabeth to the locked ward at the far end of the hospital compound. A flock of crows circled high overhead, seeming to follow the two receding figures. As they arrived at the outer doors of the locked unit, the orderly reached for his keys. The crows circled while the two crossed the threshold of the unit, Elizabeth suddenly pausing, turning, and looking outside, her gaze riveted on the flock of birds.

All but two flew off, disappearing into the piñon-covered hills. The two that remained came to rest on the red brick wall adjacent to the locked unit, their black eyes boring into Elizabeth. She looked panicked then enraged and, shaking a finger at the creatures, yelled something. Her frantic gestures told Claire that she was screeching curses to ward off evil.

Claire took a step back from the window, from the impact of Elizabeth’s rage.

The orderly grabbed Elizabeth roughly by the arm and pulled her inside.

The crows waited, watched, then flew away.

Paul DeBlassie III, Ph.D., is a psychologist and writer living in Albuquerque who has treated survivors of the dark side of religion for more than 30 years. His professional consultation practice — SoulCare — is devoted to the tending of the soul. Dr. DeBlassie writes fiction with a healing emphasis. He has been deeply influenced by the mestizo myth of Aztlan, its surreal beauty and natural magic. He is a member of the Depth Psychology Alliance, the Transpersonal Psychology Association and the International Association for Relational Psychoanalysis and Psychotherapy.