The Cowboys of Copper Mountain by Katherine Garbera, Jane Porter, and Melissa McClone - Spotlight and Giveaway

This post is part of a virtual book tour organized by Goddess Fish Promotions. The authors will award a $25 Amazon GC to one randomly drawn rafflecopter winner (international giveaway). Click on the tour banner to see the other stops on the tour. 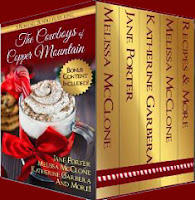 Three novellas and an unforgettable short story, now available together in one festive package!

A Cowboy For Christmas by Katherine Garbera

Annie Prudhomme never expected to be back in Marietta, MT and her family is fond of reminding her that she left them and the town behind in search of better things. A humiliating divorce that cost her everything she’d gained has driven her back home and her family isn’t about to welcome her back into the fold. She’s in town to rebuild the old home that she inherited and to move on once again.

Carson Scott never forgot Annie or the way she left. Now that she’s back in town he’s realizing that the old flame still burns hot but he can’t risk his heart the way he did last time now that he has his son to think about it. Being trapped together during a December snowstorm gives them a chance to rekindle their romance but is Annie back for good or is she just looking for a cowboy for Christmas?

Since the loss of her family in a plane crash, Harley Diekerhoff has led a quiet life and keeps to herself. Taking the temporary job at the Copper Mountain Ranch as widower Brock Sheenan’s housekeeper seems perfect for her. But her calm cocoon is invaded with the arrival of Brock’s pre-teen twins, Mack and Molly who’ve never experienced a proper Christmas and before she knows it, Harley’s determined to make their holiday perfect.

Annoyed at first by Harley’s interference, Brock is secretly pleased she’s changed Mack and Molly’s world. It doesn’t hurt that he finds Harley incredibly attractive, fierce, smart and passionate. It’s also an added bonus that she’s not afraid to challenge him and get his blood heated! But when sparks fly and the attractions sizzles between them, Harley’s not so sure she can handle something permanent with this dark, taciturn cowboy who doesn’t know how to let her in. But Brock is determined to hold on to her and praying for a Christmas miracle…

Home For Christmas by Melissa McClone

Rachel Murphy loves the scent of gingerbread baking almost as much as she enjoys creating custom edible houses at Christmastime. But she needs a bigger kitchen if she wants to make the most of her impromptu holiday business.

Enter Nate Vaughn, handsome venture capitalist turned Montana dude ranch owner and her brother’s boss. Nate’s commercial kitchen is perfect for the baker. And he thinks she might be perfect for him…as a business partner.

After being burned by a celebrity baker, Rachel’s wary of Nate’s interest in her gingerbread houses, not to mention his mistletoe kisses. She should leave the Bar V5 ranch and return to Arizona. Or can Nate convince her she’s already home?

Spending a quiet Christmas housesitting and reading novels about hot cowboys sounds perfect to Caitlin. Until a stray kitten brings her face-to-face with Noah, her crush from college. Watching the handsome vet in action melts Caitlin's heart and brings back long-forgotten emotion. She would be safer back at the house lost in the pages of a book. But a toe-curling mistletoe kiss tempts her to stay. Maybe she won't be spending this Christmas… alone.

Veterinarian Noah Sullivan isn't a Scrooge, but the Christmas Eve tradition of hanging mistletoe in the clinic's waiting room annoys him. Kissing doesn't belong at the Copper Mountain Animal Hospital. Noah rethinks his position when Caitlin Butler arrives with a stray kitten she found freezing in the snow. All he wants now is to maneuver the pretty preschool teacher under the mistletoe. If he's not careful, he'll wind up on Santa's naughty list.


Enjoy an excerpt from Christmas at Copper Mountain:

Brock was a big man. He was tall–six one or two—with broad shoulders, a wide muscular chest, and shaggy black hair.

Harley’s late husband, David, was Portuguese and darkly handsome, but David was always groomed and polished while the Montana rancher seemed disinclined to comb his hair, or bother with a morning shave.

The truth was, Brock Sheenan looked like a pirate, and never more so than now, with tiny snow flakes clinging to his wild hair and shadowed jaw.

“I’m fine,” she said breathlessly, embarrassed. “I didn’t hear you come in.”

“The faucet was on.” He rubbed his hands together, the skin red and raw. “You’re not….crying…are you?”

She heard the uncomfortable note in his voice and cringed a little. “No,” she said quickly, straightening and squaring her shoulders as she dumped the potato peels into the garbage. “Everything’s wonderful.”

“No,” she repeated crisply, drying her hands. “Just peeling potatoes for dinner.”

Her gaze swept his big frame, seeing the powdered snow still clinging to the hem of his wrangler jeans peeking beneath his leather chaps and white glitter dusting his black brows. His supple leather chaps weren’t for show. It was frigid outside and he’d spent the week in the saddle driving the last herds of cattle from the back country to the valley down below so the cows could take shelter beneath trees. “Can I get you something?”

“You don’t happen to have any coffee left from this morning that you could heat up?”

“I can make a fresh pot,” she said, grabbing the glass carafe to fill it with water. “Want regular or decaf?”

He glanced at the clock mounted on the wall above the door and then out the window where the snow flurries were thickening, making it almost impossible to see the tall pine trees marking one corner of the yard. “Leaded,” he said. “Make it strong, too. It’s going to be a late night for me.”

She added the coffee grounds, and then hit the brew button. “You’re heading back out?”

“I’m going to ride back up as soon as I get something warm in me. Thought I’d take some of the breakfast coffee cake with me. If there was anything left.”

“There is.” She’d already wrapped the remaining slices in foil. He wasn’t one to linger over meals, and he didn’t like asking for snacks between meals, either. If he wanted something now, it meant he wouldn’t be back anytime soon. But it was already after four. It’d be dark within the hour. “It’s snowing hard.”

“I won’t be able to sleep tonight if I don’t do a last check. The boys said we’ve got them all but I keep thinking we’re missing one or two of the young ones. Have to be sure before I call it a night.”

Harley reached into a cupboard for one of the thermoses she sent with Brick on his early mornings. “What time will you want dinner?”

“Don’t know when I’ll be back. Could be fairly late, so just leave a plate in the oven for me. No need for you to stay up.” He bundled his big arms across his even bigger chest, a lock of thick black hair falling down over his forehead to shadow an equally dark eye.

There was nothing friendly or approachable about Brock when he stood like that. His wild black hair, square jaw, and dark piercing gaze that gave him a slightly threatening air, but Harley knew better. Men, even the most dangerous men, were still mortal. They had goals, dreams, needs. They tried, they failed. They made mistakes. Fatal mistakes.

“Any of the boys going with you?” she asked, trying to sound casual as she wrapped a generous wedge of cheddar cheese in foil, and a hunk of the summer sausage he liked, so he’d have something more substantial than coffee cake for his ride.

He shook his head, then dragged a large calloused hand through the glossy black strands in a half-hearted attempt to comb the tangled strands smooth. “No.”

She gave him a swift, troubled look.

He shrugged. “No point in putting the others in harm’s way.”

Her frown deepened. “What if you get into trouble?”

She arched her brows.

She ought to be intimidated by this shaggy beast of a man, but she wasn’t. She’d had a husband—a daring, risk taking husband of her own—and his lapse in judgment had cost them all. Dearly.

“It’s dangerous out there,” she said quietly. “You shouldn’t go alone.”

USA Today, and New York Times bestselling author of 47 romances and women's fiction titles, Jane Porter has been a finalist for the prestigious RITA award five times, with her Tule Publishing novella, Take Me, Cowboy, winning the Novella Category July 2014. Jane today has over 12 million copies in print, including her wildly popular Flirting with Forty, a novel picked by Redbook Magazine as it's Red Hot Summer Read in 2006 before being turned into a Lifetime movie in 2008 starring Heather Locklear.

Jane holds an MA in Writing from the University of San Francisco and makes her home in sunny San Clemente, CA with her surfer husband, three sons, and two dogs. You can learn more about Jane at www.JanePorter.com. 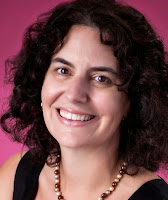 USA Today bestselling author Katherine Garbera is a two-time Maggie winner who has written more than 65 books. Writing is the chief focus of her time after her family and the only thing she likes more than working on her own books is reading other authors. She is a frequent speaker at conferences and loves the opportunity to talk about writing with anyone who'll listen. A Florida native who grew up to travel the globe, Katherine now makes her home in the Midlands of the UK with her husband, two children and a very spoiled miniature dachshund.

Melissa McClone has published over thirty romance novels with Harlequin and Tule Publishing Group. She’s also been nominated for Romance Writers of America’s RITA® award. When she isn’t writing, you can usually find her driving her minivan to/from her children’s swim practices and other activities. She also sends care packages to deployed service members and fosters cats through a local no-kill animal shelter. Melissa lives in the Pacific Northwest with her husband, three school-aged children, two spoiled Norwegian Elkhounds, and cats who think they rule the house. They do!