Center of Gravity by Laura McNeill - Spotlight and Giveaway

This post is part of a virtual book tour organized by Goddess Fish Promotions. Laura McNeill will be awarding a $20 Amazon/BN GC to a randomly drawn winner via rafflecopter during the tour. Click on the tour banner to see the other stops on the tour.

Her whole life, Ava Carson has been sure of one thing: she doesn’t measure up to her mother’s expectations. So when Mitchell Carson sweeps into her life with his adorable son, the ready-made family seems like a dream come true.

In the blink of an eye, she’s married, has a new baby, and life is grand.

When her picture-perfect marriage begins unraveling at the seams, Ava convinces herself she can fix it. It's temporary. It’s the stress. It’s Mitchell’s tragic history of loss.

If only Ava could believe her own excuses.

Mitchell is no longer the charming, thoughtful man she married. He grows more controlling by the day, revealing a violent jealous streak. His behavior is recklessly erratic, and the unanswered questions about his past now hint at something far more sinister than Ava can stomach. Before she can fit the pieces together, Mitchell files for divorce and demands full custody of their boys.

Fueled by fierce love for her children and aided by Graham Thomas, a new attorney in town —Ava takes matters into her own hands, digging deep into the past. But will finding the truth be enough to beat Mitchell at his own game?

Center of Gravity weaves a chilling tale, revealing the unfailing and dangerous truth that things—and people—are not always what they seem.

Every day, somebody, somewhere, needs a hero.

Think about it. The mom lifting a two-ton truck to save her son after a car crash. The dad who can't swim—who jumps in the water anyway—to pull out his drowning daughter. The guy who kicks down a door of a burning house because his friend’s kid is trapped inside.

All of a sudden, getting hurt doesn’t matter. There’s no thinking twice. Just a gut pumping, jump-off-the-cliff, no turning back.

For these regular people thrown into crazy life or death situations, there's one big hero moment. Then, they go back to work, their jobs, or school.

And it's someone else's turn.

I’m only in the third grade, but I’ve been waiting for my chance to be a hero my whole life.

An ear-piercing shriek yanks me back to the school playground.

“Emma Dunlop’s stuck up in the oak tree.” My best friend Mo runs up, breathless. He bends over, chest heaving in the humidity, and puts both hands on his knees. “She’s freaking out.”

Shielding my eyes, I grit my teeth. The tree’s as big as a monster, with twisted brown branches that extend like arms, thick emerald leaves at the fingertips. Spanish moss hangs from the lowest limbs, the ends curling like a snake’s tail.

Though I can’t see her through the tangle of limbs, I picture Emma hanging on tight to the rough bark. Shaking. Really scared. Trying not to look down at the brick-red clay.

I run a hand through my hair.

She’s in trouble. And I know why.

Legend says a man’s head—a genie—is hidden in the leaves and branches. Weird, rough pieces of wood make up his face. He has knots for eyes. A bump for his chin. It’s for real. I’ve seen it.

All the kids know the story. If you touch the genie’s nose, your wish will come true. Of course, my dad doesn’t believe in stuff like that and says I shouldn’t either. He’s a Ph.D. And does an important job at the college. So I guess he knows what he’s talking about.

But that’s not going to save Emma now. I start to jog, then full-out sprint. At the base of the tree, I push through a crowd of my classmates. Third and fourth graders, gaping, heads tilted, mouths open like baby birds. When I reach the trunk, I squint up and find Emma’s brand-new saddle shoes dangling high above me. I see pale, thin legs, and the crisp edges of her plaid jumper. And despite everyone talking and whispering, I hear Emma crying. It’s a whimpering wail, like a hurt animal.

“Y’all go on back inside now. Go back to class,” my teacher says, pushing the group back an inch or two. I end up jostled next to the school librarian, who’s holding her hands like she's praying.

Our eyes meet. Mine flicker away.

“Don’t even think about it, Jack,” she warns.

But I kick off my shoes anyway and grab hold of the trunk. Deep down in my belly, I make myself act like I'm not scared. I don’t like heights or even hanging upside down from monkey bars. But Emma needs me. 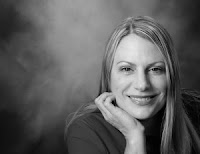 After six years behind the anchor desk at two CBS affiliates, Laura moved to the Alabama Gulf Coast to raise her family. Her accolades in broadcasting include awards from the Associated Press, including Best News Anchor and Best Specialized Reporter.

Laura works at Spring Hill College as the school’s web content and social media manager and is active in her community—participating in fundraisers for the American Cancer Society, Ronald McDonald House, and Providence Hospital’s Festival of Flowers.

Laura was recently awarded a 2-book deal with Thomas Nelson Publishing, a division of HarperCollins. Her novel, Center of Gravity, set in Mobile, Ala., will be published in July of 2015. Laura is represented by Elizabeth Winick Rubenstein, president of McIntosh and Otis literary agency in New York. Her writing awards include those from William Faulkner-Wisdom Creative Writing Competition, Writer’s Digest, RWA, and the Eric Hoffer competition.