This post is part of a virtual book tour organized by Goddess Fish Promotions. KJ will be awarding an eCopy of Broken Prophecy to 3 randomly drawn winners via rafflecopter during the tour. Click on the tour banner to see the other stops on the tour.

1. I have an irrational fear of fish. Well, okay – not really. But for some reason I find fish creepy and sometimes have unpleasant dreams involving fish monsters. Needless to say this means that when I go to the markets I always stop by the fish shop and take a long, slow, morbidly fascinated look. I’ve made a mental note to put some sort of fish-based monster in a future book. I wouldn’t have to use that much imagination – a quick glance at some photographs of angler fish and Goblin sharks would probably do it. I like to play up my “fish phobia” in interviews and so on, purely because I think it’s funny.

2. Despite being bothered by fish, I’m not the slightest bit afraid of spiders – poisonous ones included. I do keep a respectable distance from venomous snakes, but that’s because I’m not a moron. Well, and I’m Australian. Not being afraid of deadly snakes is a non-survival trait in this part of the world.

3. Like most normal, well-adjusted people, I have a collection of weapons. Two daggers, a pair of sickles, a spear, a long sword, and a shield. And a couple of whacking sticks. I have no clue how to use any of them, but they look cool hanging on the wall. I bought the sword to celebrate getting my first US publishing contract.

4. This one will sound particularly unbelievable, but I have my very own Mark of Destiny: a silver crescent on one of my fingers. And what is the logo of the first big publishing company to take me on? A crescent. Apparently the mark is a scar I picked up in childhood, but I have no memory of it – it’s just always been there. Fear the great and mighty destiny of the Chosen One!!

5. Despite writing epic fantasy, I don’t particularly like reading it. I’ve read very few of the big names in the genre, and several I’ve taken a look at simply didn’t appeal to me so I stopped reading. I personally don’t think that’s a problem; if you write in a genre you haven’ read a huge amount in you’re less likely to wind up imitating your peers. David Eddings is a minor hero of mine because I heard that he read Lord of the Rings and, like me, didn’t enjoy it. So he decided to prove he could do better! (I thought Pawn of Prophecy was pretty good. LoTR drove me to distraction when I read it at the age of twelve).

A fun adventure that satirises fantasy tropes in the style of Terry Pratchett.

Ambit Afterman is the Chosen One. Born with the mark of the silver bellflower on his palm and given a magical spear, he is the one whose coming the prophecy foretold.

Unfortunately, he would much rather drink beer and get laid - destiny can go fuck itself.

Together with his demon friend Snarl, Ambit sets out on a mighty quest - to make sure the prophecy doesn't come true, and avoid doing anything heroic under any circumstances. Along the way he will make polite conversation with demons, not deliver any great speeches, not train with the wise monks, and weasel his way out of adventure and into the nearest pub. But there may just be time to have cheap sex with the beautiful princess along the way.

Once, long ago, the Land of Flowers was happy.’ The storyteller paused to look meaningfully at his audience. ‘Yes, very happy,’ he added. ‘But then the demons came. One day the sky went dark and the Nine Mountains erupted, with fire and smoke pouring into the sky. The land went dark and lava flowed over the earth, and the demons came crawling out of the ground – thousands of them, with burning eyes and metal teeth. They spread everywhere, killing everyone they found, destroying villages and towns, spoiling everything.’

The storyteller’s voice rose dramatically and his audience, mainly children, listened expectantly. Around them other people were half listening. Adults relaxed in the shade after a long day’s work, and a young woman was singing for tips in the background. She provided a rather nice soundtrack.

‘Today, the Nine Mountains are home to the nine demon lords,’ the storyteller continued, ‘and they send their minions out to oppress anyone living too close to the ruined lands they’ve taken for themselves. One day, perhaps, they will spread through the whole of the land and the human race will be wiped out.’

‘Or maybe they’ll bore themselves to death first,’ a lazy voice put in from somewhere behind the audience.

‘But there is still one thing that can stop the demons and put everything right again,’ said the storyteller, ignoring the interruption.

‘The Chosen One!’ a small girl piped up. Around her, the other children buzzed excitedly.

‘Fifty years ago, when the demons first came, it was said that someone would come with the power to drive them away forever,’ the storyteller nodded. ‘A special warrior, with a special weapon.’

‘Bullshit!’ the heckler from up the back shouted.

The storyteller glared in his direction, and went on doggedly. ‘Some say this destined one hasn’t been born yet. Others believe he is already here, and that one day, any day now, he’ll appear to begin the fulfilment of his great destiny. For all we know, he could be here today. He could be one of you, and you don’t even know it yet.’ He smiled at the fascinated children.

‘I wouldn’t count on it, kids,’ the heckler threw in.

‘When will the Chosen One come?’ a boy asked.

‘Will you shut up?’ the storyteller finally snapped.

The young man lounging on a rock by the wall of the town tavern only grinned at him, and when the other adults nearby muttered ominously, he grinned at them too. The singing girl took the opportunity to sing a little more loudly, and was rewarded with a faint rattle of demon eyes thrown into the bowl at her feet.

Seemingly realising he wasn’t going to win this particular confrontation, the storyteller pushed his red-striped hair away from his face and turned his attention back to his listeners. ‘If you want to know more about the Chosen One, the monks in the valley are the people to ask,’ he said. ‘They know the prophecy, and they can recognise the Chosen One. Many people go to them asking if they’re the one, but all of them have gone away disappointed.’

‘I want to go and see them!’ a small boy said immediately. ‘I want them to teach me how to fight demons!’

‘That’s definitely something you can find there,’ said the storyteller. ‘The monks are always happy to take on new apprentices.’

The boy glanced proudly at his friends, golden eyes shining with excitement.

‘Oh goody, let’s all go and get ourselves killed,’ the heckler muttered. ‘Why is everyone letting this old goat tell their kids what a great idea it is to go and fight demons?’

‘And I suppose a coward like you would tell them they shouldn’t?’ the storyteller threw at him.

‘I’d tell them to make up their own minds, is what I’d do,’ said the heckler, idly rolling the shaft of a spear over his palm. ‘That’d be why you’re the popular one, right?’

‘Well, I’m not too scared to go and see the monks,’ the golden-eyed boy told him.

‘That’s because you’re a stupid kid,’ said the heckler. He winked at the singer, who had stopped singing and was now eyeing him with interest. ‘Hey, sweetie, want to see my spear?’

‘Who are you, anyway?’ someone else asked. ‘I’ve never seen you around here before.’

‘Trying to work out where I’m going at the moment,’ said the heckler, resting one long leg on the other and stifling a yawn. He leaned his spear, which was a shabby thing with its shaft bound with leather, against the wall beside him.

‘One of the Dispossessed, are you?’ said the storyteller.

‘Stop doing that,’ the stranger growled.

‘Giving everything names,’ said the stranger. ‘It’s obnoxious. I’m not a Dispo-whatever; I’m a traveller. Labels are unnecessary. And right now I’m way too sober, so fare-thee-well, grandpa.’ He stood up, heaving a heavy pack onto his shoulder, and sauntered off into the tavern, snatching the spear along the way. The singer glanced around and followed him. 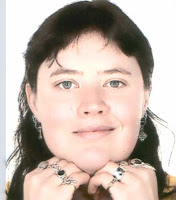 K.J. Taylor was born in Australia in 1986 and attended Radford College and the University of Canberra, where she returned to obtain a Master of Information Studies in 2012. She currently works as an archivist.

She published her first work, The Land of Bad Fantasy, through Scholastic when she was just 18, and HarperVoyager went on to publish The Dark Griffin in Australia and New Zealand five years later. The Griffin's Flight and The Griffin's War followed in the same year, and were released in America and Canada in 2011. The Shadow's Heir, The Shadowed Throne and The Shadow's Heart have now joined them in both Australia and the US.

Buy the book at Amazon.
a Rafflecopter giveaway
Posted by MJ Thomas at 4:00 AM