This post is part of a virtual book tour organized by Goddess Fish Promotions. Deborah Serra and Nancy Serra Greene will be awarding a $50 Amazon or Barnes and Noble GC to a randomly drawn winner via rafflecopter during the tour. Click on the tour banner to see the other stops on the tour.

Thanks for stopping by to chat today. We just have a few questions...

What are four things you can’t live without?

What is your favorite television show?

I enjoy The Bachelor. I’m a romantic at heart so I like the love-at-first-sight element, but the drama is hysterical. I’m not certain the producers realize they’re making a comedy, but really how can you not laugh?

Probably Elizabeth Bennett because who wouldn’t want to spend their life as the mistress of a manor house in the British countryside with the dramatic and passionate Mr. Darcy?

Today you can pick up 2 BROADS ABROAD: Moms Fly the Coop on Amazon, or Barnes & Noble. I know you’ll laugh and maybe get a little misty-eyed, and you’ll get a feeling for our different personalities, which will set you up for our next book. We are considering where we should go and we’re taking suggestions on our Facebook page – chime in!

What books or authors have most influenced your own writing?

I do like Nora Ephron, David Sedaris and Mindy Kaling.

When sisters, Deborah & Nancy, discovered that motherhood was a temp job they decided to run away from home. After packing up that last kid for college, and facing the sad stillness of their suddenly quiet homes, they decided to leave the country. 2 BROADS ABROAD: MOMS FLY THE COOP is a funny, irreverent, occasionally poignant travel tale of their impulsive road trip around Ireland.

In this witty warm-hearted adventure, they experienced some of Ireland’s quirkier history while sharing universally relatable stories of maniacal school coaches, neurotic neighbors, and tiger moms. Having kicked that empty nest into their rearview mirror, the sisters took off careening down the wrong side of the road, making questionable choices, getting trapped in a medieval tower, sneaking Chinese take-out into a famous cooking school, drinking way too much, and gaining a changed perspective on their lives ahead.

“Your youngest is leaving for college? Aw, empty nest?” Then, sappy eyes followed by a plaintive grin and, “What will you do?”

Before my sister and I decided to run away from home we were bothered by that question. There was something minimizing about it, minimizing and not completely untrue. Motherhood had been so deceptive, the greatest paradox in life: every single bleary-eyed day felt a month long, and the years went by in an instant. They flashed by like lightning and left a desiccated scorch mark wearing my clothes. It was disagreeable to imagine what life would be like childless: there would be the family tree, and there would be the mom who’s the center of the family tree, standing leafless, bare (and it has been a while since I looked good bare). There was some solace as I glanced around me to see my younger sister, Nancy, would be standing there bare as well. We were embarking on this progeny-shedding calamity simultaneously as both of our youngest daughters, Nicole and Olivia, were leaving for college the same week.

I knew that Nancy hadn’t really focused on it yet. And then, we met at Fashion Island in Newport Beach near her home to get a birthday gift for our mom. We ran into two of Nancy’s neighbors, Vicki and Susan.

“Yes,” Nancy said. “She’s going to the University of Washington.”

“Oh,” Susan lifted her eyebrows, “you must be devastated.”

“What?” Nancy looked confused. “No, actually I was happy for her. She worked really hard. It was her first choice school.”

“But so far away!” Susan added in that annoying singsong tone.

Nancy shifted her feet, a move I knew well as her sister. It was something she always did when she was being told something she did not like to hear.

“It’s a plane ride. You need an airplane to see your daughter.” Susan said loudly.

“Yeah.” Nancy turned to me in an effort to change the subject. “You remember my sister, Deborah?”

“Of course.” Vicki smiled. And we exchanged hellos. Vicki seemed normal, but I had an inkling that I might have to slap Susan.

Susan continued on with her one thought. “With your son gone already, and soon Nicole, well, Nancy, I guess you’re all alone now.”

“Sure. Sure. Right. So that’s better than nothing, huh?”

Nancy and I both froze. Did she just say that?

“You know,” Vicki tried to cut off Susan, “when Terrie’s youngest left she bought a Chihuahua puppy. Cutest thing you’ve ever seen. And the Walkers gave a room to an exchange student from Sweden,” she explained happily.

Susan opened her mouth to speak again and I wasn’t sure whether I should just smack her now and be done with it, or let her continue. I made the wrong choice.

“Remember Pam Winthrop?” Susan leaned in. “When her son left she started eating a pint of Ben & Jerry’s every day until she put on 60 pounds. Sad, really, tragic. Even her kneecaps were fat.” Then Susan turned to me, “So, Deborah, isn’t your youngest graduating, too?”

“I’m leaving the country,” I said.

Susan cocked her head. “What?”

“So am I,” Nancy said. I looked at her. I saw the decision in her eyes. “I’m going with Deborah. We’re taking a long trip together – a sisters trip.”

“You are?” Susan sounded a little thwarted, which Nancy found gratifying.

“Yup, in the planning stages.” Nancy smiled at Susan who was clearly disappointed that we were not miserable as anticipated. “Nice to see you though, Susan, Vicki. Got to go. In the middle of booking flights and stuff. So much to do!”

We turned away and strode with purpose toward the door.

I whispered, “Susan’s a real gem.”

“I’ve been so busy I just wasn’t thinking about it.”

“And I haven’t been able to think about anything else,” I said. “When I’m awake in the middle of the night it runs over and over in my mind.”

Nancy said, “When I heard that crap Susan was dealing, all of a sudden I realized, there’s no way am I plodding into that sunset with fat kneecaps carrying a Chihuahua.” 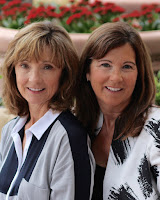 Deborah Serra has been a sought-after screenwriter for twenty-five years having written for NBC, CBS, Sony, Lifetime, Fox, and others. She was a recipient of the 2012 Hawthornden Literary Fellowship. Her first novel was a semi-finalist for the William Faulkner-William Wisdom Creative Writing Award given by the Faulkner Society in New Orleans, LA.

Nancy is a graduate of San Diego State University. She worked in medical sales before stepping away to raise her two children, at which point she became: Team Mom, Snack Mom, PTA member, Assistance League Volunteer, and the list is never-ending. Nancy was the editor and publisher of the Buffalo Hills Echo newsletter with a circulation of 1400. She also designed and managed her community website.