This post is part of a virtual book tour organized by Goddess Fish Promotions. One randomly chosen Grand Prize winner will receive a $100 Amazon gift card and a runner up will receive autographed copies of Someone Else's Skye and Guarding Poppy (US only). Click on the tour banner to see the other stops on the tour.

Welcome to It's Raining Books--let's get right to it. Why do you write in your genre? What draws you to it?

I love when the stakes are heightened, and you can’t get much more heightened than superhuman. But in my paranormal world-building I also like when there is a sense of the familiar, which is why my supernatural characters interact with humans. It keep them and the reader tide by many of the same boundaries that affect us, such as time, geography and seasons. I believe that helps keep the story relatable.

I think that is what’s so great about the paranormal genre. You can write to the limits of your imagination. Since my world does deal with current times and real places I do have a fair amount of research to do on any geographical location I have not been to, as well as current populations and people. But then I can add to that base and create the world I see in my head.

I learned not to give up from Caleb and Olivia. Their love story lasted through three books and they went through such horrible events at times, even as the writer who knew how it was all going to end, I was asking myself if it was reasonable that they would still be together in the end. Yet their relationship still persevered on the page. I’m not quite sure how, but it did, and it makes me look at relationships between men and women differently today because of it.

Yes, any character with a common name like Mike or Bill is usually toast in one of my novels. I like more uncommon names. That doesn’t mean they need to be Katniss Everdeen, but more like Caleb, Jax, Skye, Gemma and Poppy. This wasn’t something I planned or intended, just something that has sort of evolved through the books.

Plotter, definitely. I am impressed by anyone who can roll through a first draft by the seat of their pants.

A glass of Pellegrino water mixed with a splash of cranberry juice and my IPod. I like to listen to music a little before I write.

Book three in my Men of Brahm Hill series, Leaving Lily Behind, will be released sometime next April.

Yes, throughout this tour we’ve had a lot of discussion about book covers and their effect on the reader in choosing whether or not to buy a certain book. I’m curious if the cover design plays a role for your readers in deciding to buy a new-to-them author’s work.

AND FIVE STORIES OF THE MEN WHOSE LIVES WILL BE CHANGED BY IT.

Alec Lambert was born to lead. He’s a ruling Elder of The Brethren, possessing steely confidence, natural smarts, and decisive problem solving abilities . . . and he’s not too bad on the eyes, either. Everything in his life has gone exactly according to plan—until the night of Brahm Hill. Alec loses his best friend at the hands of the uncle he trusted like a father, along with his previously unshakable faith to lead those with whom he’s charged. Despite this, he continues to press ahead, and for his next assignment he’s asked to protect a very beautiful but very clumsy Dhampir who’s being hunted by a powerful warlock. Suddenly, he finds his whole Brethren world is turned upside down . . . and he finds himself harboring a desire for her he can’t explain.

Poppy Honeywell knows she’s far from perfect. Bad things tend to happen when she’s around. She’s more than a little clumsy, with a phobia or two mixed in. Not to mention that her name is certainly unusual. But she doesn’t have time to worry about all that because she’s on the run and not about to back down from the arrogant Elder who’s just been assigned as her protector, claiming he has all the answers to her problems. The real problem, though, is . . . she’s irresistibly drawn to this man who faces constant danger and takes charge so naturally. But Poppy also sees that taking charge of others helps Alec mask his own very deep pain.

WILL ALEC FIND HIS WAY OUT OF THE DARKNESS AND SURRENDER TO HIS FEELINGS FOR POPPY BEFORE THE WARLOCK CHASING HER CATCHES UP TO THEM BOTH?

Sovereign Elder Joseph Davin stepped forward to embrace Poppy. “You’re not safe here, little flower.” Now Alec really felt like he was intruding on a private conversation. “I must protect you the best way I know how. I promised your mother.” He then motioned back to Alec. “I trust Alec. He’s a former Guardian—and a very good one. You yourself said that you can feel Irina getting closer. Let Alec take you someplace where he can protect you and you can know what it feels like to be safe. In the meantime, I will find a way to deal with Irina.”

Poppy dropped her head quietly, and for a moment it seemed she wasn’t going to answer him. “I feel safer here with you than I will with a stranger.”

“He’s right,” Alec finally said as he came slowly to his feet, realizing he needed to do something to gain this woman’s trust—though he could hardly blame her for being guarded after spending a lifetime on the run. “I may be a stranger to you, but I can protect you. And more importantly, I can give you all the tools at my disposal so you can protect yourself. If you have a sense for recognizing the warlock who’s threatening you, your Dhampir instincts are telling you that you’re in danger. You need to start trusting those instincts.”

Those huge gold eyes of hers locked on him fully with a look of utter determination as she walked right up to him—thankfully, straight this time. He had to admit, he flinched just a bit with the possibility she might trip again.

“I don’t want any part of witchcraft, Dhampirs or vampires. That’s not who I am.”

“Yes, it is,” he challenged her without hesitation. “That’s exactly who you are.”

Her eyes narrowed as if she were preparing to blast him with a thousand different reasons why that was not true, but instead she replied, “I will agree to go with you on two conditions.” Alec simply crossed his arms in front of his chest. What was it about women and their conditions? Why couldn’t they just agree? “One, you’ll agree to never disagree with me again.” Alec’s brows arched high at that rather impossible request. “And two, I will only go with you if it doesn’t require us crossing an ocean in an air-”

Poppy’s words were cut off by her small squeal when Alec caught sight of Joseph sticking a needle into her arm. Her eyes widened in shock and she tried to turn to Joseph, but her limbs gave out from under her almost immediately. Alec reached out and caught Poppy when she would have otherwise collapsed to the floor. “What in the world did you do that for?”

“No worries,” Joseph assured him. “It’s just a little something to help her relax for the trip.”

Alec blinked at him. “Relax? She doesn’t like flying?”

Joseph shook his head. “Terrified of it, actually. Unfortunately, Poppy lacks an appreciation for the severity of her current situation. We need to get her out of London tonight—hence, something to relax her. But once she’s someplace safe she’ll be no trouble at all.”

Alec’s gaze narrowed shrewdly. By what he had already witnessed in the few scant minutes he had been in this woman’s presence, she was the very definition of the term high maintenance.

So he doubted that very much. 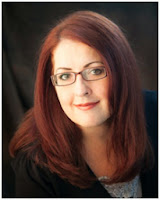 Christine is a graduate of Washington State University where she received a BA in Interior Design. And true to form of using mostly her ‘right brain’, she splits her time between her commercial design career and her imaginary world of writing. She lives in the scenic Pacific Northwest where she enjoys hiking, camping and photographing many of the wonderful places that served as inspiration for her writing. Her biggest reward in life is any given day when one of her books connects with a reader because she herself is such a lover of reading. Some of her favorite authors include Lisa Kleypas, Julia Quinn, and Kimberly Derting.