This post is part of a virtual book tour organized by Goddess Fish Promotions. Jo A. Hiestand will be awarding a McLaren/"Last Seen" ceramic mug and a CD recording of the song featured in the book to several randomly drawn winners via rafflecopter during the tour (International Giveaway). Click on the tour banner to see the other stops on the tour.


Five Things You Might Not Know About Jo A. Hiestand


I met one of my future friends at Girl Scout camp. We were in the fifth grade and didn’t know each other then. I was walking through the woods and saw Pixie holding onto something at the base of a tree. On coming up to her, I realized she had a snake by its tail. She was trying to pull it out of the hole in the ground. I grabbed onto the tail and we both yanked. The snake wouldn’t budge. We assumed it’d eaten a rabbit or something like that, and the tummy bulge prevented the snake from moving. We left it there. I wonder how many friendships are formed over a stuck snake?

In 1980 I was the St. Louis agent for The McCalmans, an internationally-known Scottish folk trio. I’d met them when I was living in England, trying my hand at professional folk singing. I asked if they’d come to St Louis (where I lived) if I got them gigs. They said they’d love to. So when I returned home I firmed up about eight venues. They were here during the hottest summer St Louis had seen in decades! 100º+ temps. The guys stayed with me--at that time I lived in an apartment that had one window A/C unit in the living room and one window unit in one of the two bedrooms. I’m sure they were miserable. They were in town for two weeks, and I doubt I’ll forget a moment of it. Including me cutting one of the guy’s hair – and when I was finished, he didn’t even have to wear a hat!

At one time our family had a pet skunk. Because he resided with us, I was used to skunks, so when I was a camp counselor and saw a skunk in the woods, evidently injured, I thought nothing of picking it up. It looked as though its back was broken, for it was dragging its hind legs. I brought it back to camp and asked the camp director if he’d drive me to the nearest vet so the skunk could be helped. He yelled that I should put that skunk down and leave it alone. When I put him on the ground, it bit my thumb. A week went by and an infection set in at the bite site. The director rushed me to the nearest doctor. I learned that an animal that drags its hind legs most likely has rabies—for which there’s no cure if you get it. I was sent home and started the treatment (at that time, three weeks of daily injections—the needle injected sideways under the skin at the stomach.) I learned later that Missouri Highway Patrol troopers came into the camp, searched the woods, found the skunk, and flew its head to a lab for brain examination. Yep, the skunk was rabid. I give wild animals a wide berth, now. I don’t want to go through that again.

I’m a fairly competent baker, but a pie I made was my all-time flop. I made a blueberry-strawberry pie for a dinner I hosted. On cutting it at the table I saw that it was swimming in a thin, blue watery mess. Someone tasted it and spat it out. It was bitter! I couldn’t figure why. I knew I’d put in the sugar. The next day, on looking at the ingredients I’d used, I realized instead of using cornstarch I’d used baking soda. At least it would absorb any pie odors!

You can never be too careful about your word choices when traveling abroad. My friends and I were in Edinburgh, Scotland, and had climbed to the top of the Sir Walter Scott monument. Back on the ground, I wanted to get some shots of the whimsical stone gargoyles that decorated the monument’s exterior. I sat on a bench next to the monument to change the camera lens. The area seemed to be a great place for older folks to sit and talk, perhaps feed the pigeons. My friends were anxious to go to the Castle, situated at the upper end of the Royal Mile. I got up from the bench--turning toward the Monument and, unfortunately, the older adults--and said, “I just want to take a photo of these old gargoyles.” I’m probably the first St Louisan who’s been cussed out in Gaelic.

So, there are five truly note-worthy things about me that most people don’t know. Aren’t you thrilled! Thanks! Jo

One dark night, popular singer Kent Harrison goes missing after his performance at Tutbury Castle. When his body's found in a forest, the police investigation focuses on Kent's ex-wife, a local herbalist, a covetous colleague, and even the curator of another castle who tried to lure Kent into performing there. But his occasional singing partner, Dave Morley, seems to have the biggest motive. He's dying to make his name, money, and the big time, especially at the medieval Minstrels Court reenactment, where Kent's appearance guarantees SRO. Did Dave murder Kent to eliminate the competition...or had their partnership struck a wrong chord? To entice him into investigating, ex-cop McLaren's girlfriend plays detective. But Dena ends up in great danger. Now McLaren must not only solve Kent's murder but also rescue her, a hard task when a blast of jealousy, anger, and lies mutes the truth.

She seemed to be floating in a bizarre landscape where time had ceased to function and the sole inhabitant stared mutely at her. For, framed in the open doorway, silhouetted against the florescent light in the hallway, stood a tall figure dressed in dark coloring. A rubber mask of a smiling Margaret Thatcher covered his face. His hands were gloved, the left holding a coil of rope, the right holding something dark that glistened in the light. He stepped into the room, not speaking, yet making his desires known with the gesture of the gun. 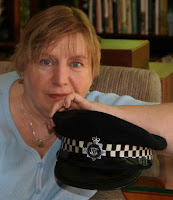 Jo A. Hiestand knew in grade school that she wanted to be a mystery writer. But life got in the way: singing in a semi-pro folk group, traveling to New Zealand, working as a camp counselor, co-inventing P.I.R.A.T.E.S. (a mystery-solving treasure-hunting game), becoming a tour agent for a Scottish folk singing group, attending a citizen police academy and riding along with police officers… But she needed to immerse herself in All Things British for her books. England beckoned and she responded.

She bee-lined to Derbyshire, feeling it was the ‘home’ of her books. Derbyshire also bestowed the essential English police contacts and transformed the St. Louisan into an Anglophile.

In 1999 Jo returned to Webster University to major in English. She graduated in 2001 with a BA degree and departmental honors.