This post is part of a virtual book tour organized by Goddess Fish Promotions. Beth is awarding a $30 Amazon/BN GC to a randomly drawn commenter. Click on the tour banner to see the other stops on the tour.

Captain Stuart Monroe returns home from the Revolutionary War to find Thornton Hall threatened by a peacetime foe: debt. He knows the location of a treasure amassed to pay for the capture of Benedict Arnold that would restore his manor to its former glory. The catch, it's hidden in the graveyard, and coveted by old enemies.

Hettie Fairfax inherited the Sight from her Cherokee ancestors, and her otherworldly visitors warn her, and Stuart, away from the buried treasure. Half-dead from fever, she delivers a message: the treasure is cursed. But will he believe a girl half out of her mind with illness? Even when a very real enemy attempts to poison her? Stuart soon wants to marry Hettie, but she fears her "odd ways" will blemish his reputation. The spirits have their own agenda, however, and the battle against darkness tests everything the couple holds dear, including their love for each other.

Stuart clasped her shoulders. She was flesh and blood beneath his grip, yet seemed not of this world. “What did he say?”

“To watch for your coming.”

“How could they possibly anticipate my visit?”

“That has not yet been revealed.”

Her answer baffled him, as did she. “Why did you call me master? Are you a servant?”

He’d doubted she was in anyone’s employ. Her smooth hands, opulent coverlet, and refined manner, all bespoke gentility. And she smelled of violets, a costly scent.

He gazed deeply into those mesmerizing eyes. “Why are you here?”

“I seek the living among the dead.”

A peculiar reply from the haunting stranger. “Who?”

Again, the sensation of ants scattering down the nape of his neck. “How did you know I would come?”

She spoke like one in a dream. The cold mist, the woman—an apparition in the fog—seemed unreal. Yet she was no ghost.

“You can foresee events?” A sense of dread possessed him.

“In glimpses. Your father appeared to me.” Her barely perceptible voice faded entirely, and her eyes fluttered, then closed. She swayed against him, any further explanation muffled by his coat.

Stuart held her fast and kept her from sliding to the cold earth. What did his father have to do with this visitation? Was the woman in his arms some sort of witch? 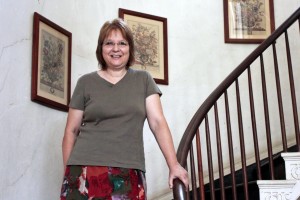 Married to her high school sweetheart, Beth Trissel lives on a farm in the Shenandoah Valley of Virginia surrounded by her children, grandbabies, and assorted animals. An avid gardener, her love of herbs and heirloom plants figures into her work. The rich history of Virginia, the Native Americans, and the people who journeyed here from far beyond her borders are at the heart of her inspiration. She’s especially drawn to colonial America and the drama of the American Revolution. In addition to historical romance, she also writes time travel, paranormal romance, YA fantasy, and nonfiction.