Murder at Morningside by Sandra Bretting - Cover Reveal and Giveaway

This post is part of a virtual book tour organized by Goddess Fish Promotions to reveal the cover of Sandra Bretting's upcoming release Murder at Morningside. Sandra will be awarding a $20 Amazon or B/N GC to a randomly drawn winner via rafflecopter during the tour. Click on the tour banner to see the other stops on the tour. 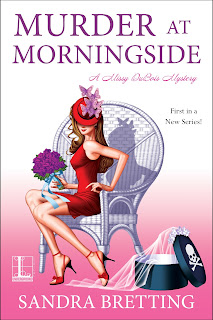 Time rewound with each footfall as I began to climb the grand outer staircase at Morningside Plantation. The limestone steps, burdened with the history of five generations, heaved their way toward heaven.

At the top lay a wide-plank verandah supported by columns painted pure white, like the clouds. By the time I took a third step, the digital camera in my right hand began to dissolve into the sterling silver handle of a ladies parasol. The visitors’ guide in my left hand magically transformed into a ballroom dance card bound by a satin cord.

Another step and the Mississippi River came into view as it flowed to the Gulf, languid as a waltz and the color of sweet tea. Could that be a whistle from a steamboat ferrying passengers past the plantation? If so, a turn and a wave wouldn’t be out of the question once I reached the top of the stairs, and good manners would dictate it.

I was about to do that when I realized the whistle was only my friend’s cell and not a Mississippi riverboat. “Ambrose! Turn that thing off. Honestly.”

“Sorry.” He shrugged. “I always forget you were Scarlett O’Hara in a past life.”

The mood was broken, though, and the sterling silver in my hand returned to plastic while the linen dance card hardened to a glossy brochure.

Sandra Bretting works as a freelance feature writer under contract to the Houston Chronicle. She received a journalism degree from the University of Missouri School of Journalism and wrote for other publications (including the Los Angeles Times and Orange Coast Magazine) before moving to Texas.

Her Missy DuBois Mysteries series debuts from Kensington/Lyrical Underground in May 2016. Bretting’s previous mysteries include Unholy Lies (2012) and Bless the Dying (2014). Readers can reach her online at www.sandrabretting.com and through Facebook at www.facebook.com/sandra.bretting.

Pre-order the book at Barnes and Noble or Amazon.