Today I want to welcome Becky Lower to the blog to talk about her newest releases, Blame it on the Brontes and Banking on Temperance. Thanks, Becky, for answering my prying questions!

I write historical romances and contemporaries. I love reading Regency romances, but could never buy into all the strict codes of conduct and titles that the British impose upon themselves. My first love has always been American history, and the events, both large and small, that have shaped this country. So I began searching for little events that would have affected the lives of the people living through them. I didn’t want something large, like the Civil War, but what about the period leading up to it? What happened in the decade prior to the Civil War that ultimately led the North and South to pick up arms against one another? It didn’t happen overnight, and the little events kept being piled one on top of the other until war was the only outcome. That’s what I wanted to explore. In between writing a research-heavy historical, I like to, as someone once said, cleanse my palate with a contemporary. I like to write about small-town romances, since I grew up and now again live in a small town in the Midwest. There is still research to be done when writing contemporaries, but not nearly as much as with historicals.

I think you have to build a world for every book, not just for fantasy or paranormal. I like to immerse my readers in a setting, be it 1856 St. Louis or a modern-day Maine coastal town. I want them to feel the grit in their teeth when a sandstorm blows through town in long-ago St. Louis, or to taste the salt air as they walk through fog-laden streets on the east coast. In order to accomplish that, I do a lot of research about what life was like in St. Louis is 1856, for example. I went to St. Louis and walked the old streets near the river. I bought journals kept by the women who went west on the covered wagons, I checked into all the events, large and small, that happened that year. When I wrote my most recent contemporary, I leaned on my sister heavily for advice, since she had lived on the Maine coast for years. I had to get the color of the rocks correct, the texture of the sand, everything. One of the characters in the book is a jewelry maker, using sea glass for her necklaces and bracelets. So I took a class in jewelry making and learned the history of sea glass from the instructor. I never know where the next story idea will come from.

Regardless of whether we’re talking about my hero/heroine from the 1800s or present day, the big takeaway from all my story lines is that it’s never too late to grab for the brass ring and experience true happiness.

I don’t think so, but I do have an American Indian ancestor, so I keep a dreamcatcher in my study where I do my writing. I think it helps me come up with unique story lines.

I like to think of myself as a linear pantser who follows a vague plot outline. Kind of a hybrid, I guess. I use Blake Snyder’s Save The Cat beat sheet when I think of an idea. I write out the various beats just to see if the story line is strong enough to craft a 70,000 word book from. Then, I put the outline away and never look at it while I’m writing. I like to go back to the beat sheet when I’m done and see how many of the original beats actually made it into the final product. Sometimes I follow the outline pretty closely. Sometimes it veers off course almost from the beginning. I never know. That’s part of the fun.

A huge calendar—one of two that I use to keep myself on track. Even with both of them, I show up early or late for appointments, or forget them altogether much of the time.

The fourth book in my historical series is scheduled for release from Crimson Romance in September or October of this year. I have another contemporary that I just finished, and am currently shopping it around. And I just started working on the fifth book in the historical series. Nine books are planned for the series—one for each child in the large Fitzpatrick family. I do intend to stop it there, although some of my readers are pulling for books to be written about their favorite secondary characters, so who knows?

If you could go back in time to any era and any country, where would you go and what century would you live in? 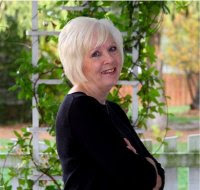 Becky Lower has traveled the country looking for great settings for her novels. She loves to write about two people finding each other and falling in love amid the backdrop of a great setting, be it present day coastal Maine or on a covered wagon headed west in the 1850s. Contemporary and historical romances are her specialty.

Becky is a member of RWA, NEORWA and Savvy Authors. She has a degree in English and Journalism from Bowling Green State University, and lives in an eclectic college town in Ohio with her puppy-mill rescue dog, Mary. Visit her website at http://www.beckylowerauthor.com.

Sisters Charlotte, Emily and Anne Bronson, each in her forties, are in Puffin Bay, ME for their mother's funeral and to sink their claws into the fortune each expects to inherit. But their mother has other plans. Her substantial fortune won't be divided until the trio return to their childhood home and live together for a year.

It's a request that pits sister against sister but could unite them in a common goal to find the friendship they shared as children, to create a family jewelry business and to win over the men of Puffin Bay. They have a year to figure it all out.

Basil Fitzpatrick was born into a life of privilege. In 1856, at 23 years of age, he is the owner of the St. Louis branch of the family banking business. He has his pick of the ladies and life by the horns. Temperance Jones and her family are far from privileged. Her father is a circuit-riding preacher from Pennsylvania. But the rumblings of a war between the North and the South force the preacher to move his family to Oregon rather than to take up arms against his fellow man. However, hardship and sickness have slowed their pace, and they are forced to spend the winter in St. Louis, waiting for the next wagon trains to leave in the spring.

Basil is drawn to the large family the moment they roll into town, partly because they remind him of his own big family in New York. But also because of the eldest daughter, Temperance. She is a tiny, no-nonsense spitfire who is bent on fulfilling her father’s wish to get the family safely to Oregon. Basil is only interested in finding a mistress, not a wife. He knows if he allows Temperance into his heart, he is accepting the obligation of her entire family and their quest to settle in Oregon. He wants Temperance like he has wanted no other, but the burden of her family may be too much for him. And he can’t have one without the other.