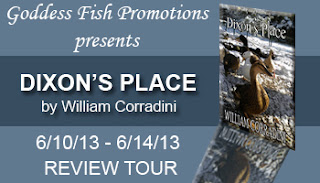 This review is done in conjunction with the author's virtual tour with Goddess Fish Promotions. William will be awarding a $10 Wild Child Publishing GC to a randomly drawn commenter during the tour. so comment here today for your chance to win! Click the tour banner to see the other stops on the tour.

When Bill and Meghan Corradini, an affluent and self-described spoiled young couple, decide they want ducks to adorn the pond they plan to build at their dream home, neither of them can imagine the mayhem, heartbreak and joy that will ensue.

Bill decides to purchase a couple of ducks but when there are just three left, he cannot abandon the third sibling, so all three come home with him and are promptly named after players for his beloved college team, the Oregon Ducks—despite the fact that all are female. He and Meghan set about spoiling and pampering their ducks, lavishing them with love.

Unfortunately, despite precautions, tragedy strikes and it changes Bill and Meghan in a profound way. Bill tells Meghan that he wants to make a difference in the lives of abandoned, abused and neglected animals. They decide to devote their time and resources to doing just that.

Along the way, both mature and their bond is deepened and strengthened as they face numerous emotional trials, most revolving around the animals they rescue and usually end up adopting. Within short order, one animal becomes two and the additions to their household multiply. Their lives are irreversibly changed and enriched.

In caring for these animals, Bill and Meghan discover their purpose in life, serve as examples to their friends and family and realize their deep capacity for love—both for the animals they work with and for each other. Their story is inspiring and never dull. It will resonate with animal lovers everywhere.

As an animal lover, I looked forward to reading this book.  And I have to say I enjoyed every bit. I was a bit hesitant for a couple of reasons. First, I knew from the blurb something awful was going to happen to put the rest of the book into motion (and it does... and I cried like a baby), and the first chapter is all about the humans in this story, and tells quite honestly how spoiled and self-centered they are.  The writer makes no bones about it, and in fact has a checklist at one point to emphasize the point.  I wondered how I would ever come to like reading about folks who were so clearly removed from my own.

Honestly, animals can change the hardest heart, and our protagonists are hard-hearted, just selfish.  But, boy howdy, does that change.  It's not (entirely) overnight, but I was amazed at just how much of a 180 degree turn they do.  And it started with three ducklings.

The author has such a way with words.  He doesn't waste them, but he's not brief either.  I imagine parts of this were terrifically difficult to write as it's not always a flattering picture, but he does it without flinching.  The only time I had trouble was in dialogue, where he seems allergic to contractions (unless they actually talk that way, which would also seem odd).  Every time it happened, it jolted me.  Thankfully, it wasn't often

There is a depth of emotion here when it comes to the animals.  It surprises the protagonists, but not me as much (as I know how animals can change lives).  I admit to not being a huge bird fan when it comes to pets, though this book changed my mind a bit.

All in all, a completely enjoyable read and one I'm glad I read.  Worthwhile, interesting and very tidily compose.  Well done, Mr. Corradini!

It wasn’t difficult to identify their hangouts, as we would find wet spots along with multiple rabbit pellets. Fortunately, due to rabbits’ rapid digestion and diet, the pellets give off no odor whatsoever. I even watched Bear Grylls on Man vs. Wild say you can eat these pellets, as he started to munch them like raisins. I was never in the British Special Forces nor did I get paid to put disgusting things in my mouth, so I have passed on this advice to this point. We placed a litter box by the fireplace and another one in Meghan’s office and that seemed to do the trick. There would be the occasional accident, but they used their litter boxes most of the time. They were better trained than Meghan’s purebred “show dog lineage” mutts.

Lesson number two—rabbits love to chew shit, especially wood. The unfortunate thing about this little nugget is that the interior of our house is almost nothing but wood. Kitchen cabinets, window ledges and frames in breakfast and living areas, cabinets and shelves in living room, floor, dining table, hutch—everything wood. We had two options: remove either the wood or the bunnies or give them other things to chew on. We bought them all kinds of wood and cardboard toys. We surrendered our woven baskets.

We even bought them, from Rabbitrescue.org, a three- level, cardboard castle. This castle was something else. It had miscellaneous shapes for windows at every level and an easy step to get from floor to floor, including the balcony on top. Fortunately, the floors were replaceable, as Myron chewed his way from the balcony to the second floor. You want reprieve from a bad day, try watching two bunnies sticking their heads out of a cardboard castle and stay in a bad mood. 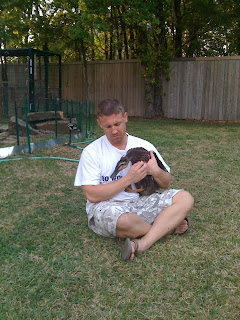 William Corradini, 42 years old, lives in Keller, TX with his wife of 10 years, Meghan. He is a sales manager at Staples Advantage where he has been for over 13 years.

William grew up on a ranch in Eastern Oregon and he spent most of his youth around farm animals, dogs, cats, parrots and any other four-legged furry, fuzzy creatures that decided to call their ranch home.

William has lived in the Dallas-Fort Worth area for 20 years and for much of that time had adopted the ‘city life style’. He had all but rejected his roots and his interests in animals. This all changed in 2008-and it started with him buying three ducks.