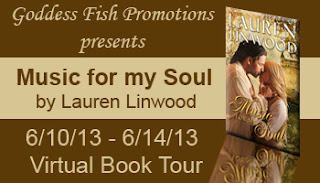 This stop is part of a Virtual Book Tour organized by Goddess Fish Promotions. Lauren will be awarding a $25 Amazon GC to a randomly drawn commenter during the tour. Click on the tour banner to see the other stops on the tour.

Lauren stops in to share with us five things about herself--so settle back and learn a some things you might not have already known.


Writers love to write about everything on the planet. Except themselves, that is.

I have great fun observing others and then taking bits and pieces of those observations and twisting them until they morph and mesh with the crazy ideas and voices in my head. I enjoy researching different eras in history, taking those dry facts and dressing them up and matching them with characters in conflict. I like nothing better than daydreaming, letting my mind wander, and then lassoing those rambling thoughts and sneaking them into my narrative and conversations my characters have with each other.

But writing about me? ME? Something that’s fun, interesting, or even embarrassing? YIKES! I don’t want the spotlight on me. Just as actors are usually shy and relish taking on roles where they can disappear into a character, I feel the same as a writer. I write about outlaws and kings, cowboys and lords, heroines who have spunk and drive and are much more clever than I ever dreamed of being.

Yet readers like to know a little about authors. Social media has changed the game. So I Facebook and tweet and even guest blog now that I’m an author. So here are some odd tidbits about Lauren Linwood.

Most children that break a bone manage to break an arm or leg. As a child, I desperately wished to wear one of those cool casts on either arm and have everyone in my class sign it. But did I break a typical bone and get to wear a cast? Not even close. My break happened to be when I fell while climbing a tree. I hit the picnic table beneath the tree, then rolled and hit the bench, then finally landed on the ground. Pain shot through me like a hot knife. The doctor diagnosed a broken collarbone. You don’t get a cool cast with that injury. Instead, I was wrapped up with an athletic bandage as long and wide as a football field. My shoulders hunched. I needed to wear a shirt three sizes too big. And there was nothing to sign. Other than feeling utter humiliation at being defeated by a tree, I had nothing to show. There’s zero cool factor in breaking your collarbone.

Drill team is a huge thing in Texas. My mom had been captain of her drill team, so the bar was set pretty high. I tried out and made the line and had a wonderful time dancing at football and basketball games. Then came officer tryouts. I’m a little quirky, and I wanted to stand out … in a good way. So I whipped up a routine to an Elvis Presley tune, All Shook Up. Most everyone else chose a current song on the radio, but the King had himself a pretty darn good career, so I thought I’d give Elvis a whirl. I even threw in a wink over my shoulder when he sang, “I’m in love (wink). I’m all shook up.” I’m happy to report that I made lieutenant all those years ago, making life-long friends with my fellow officers. To this day, we still get together for dinners and conversation. With no winking on my part.

I adore getting pedicures. It’s not all about the toes. I have fun watching the different customers come in (the writer in me is a huge people watcher). I find myself lulled by the colorful fish swimming in their tank next to the chair I always seem to sit in. I live to sit in that massage chair so I can set it to roll up and down my back, kneading away all the tension and stress locked in there. I love getting the foot and leg massage even more once my toes have been stripped of color and trimmed and buffed. It’s pure bliss to sit and luxuriate, my eyes closed, as the lotion is dribbled onto my feet and legs and I fade away to a land of contentment. Until it comes to the bottom of my feet. Every time, without fail, I start giggling. My feet are ticklish! The left more than the right. I try to hold in the laughter and squeak out a few chuckles. But then a certain place on my foot is touched, and I do a belly laugh. Yes, it’s embarrassing to have an entire salon of women whip their heads in your direction. My sheepish look and shrug are followed by more held in chuckles that finally give way to laughing aloud. As the time comes to paint my toes, I regain my poise and grab a magazine to bury my nose in. I’ve lived through another bout of the public giggles. And survived.

4 – I actually got an idea for a book (A Game of Chance, coming out in 2014!) from an experience with my husband. We met and became friendly over several months and when we both found ourselves free at the same time, he asked me out. The first date went well, so I was looking forward to the second one. My doorbell rang and I went to answer it, glad that he was on time since he’d been late the first date (almost a deal breaker in my book).

I opened the door and saw the cutest guy standing there. I wondered if he knew my roommate because I sure hadn’t seen him before. Then he smiled. WOW!!! It was my date!!! He’d told me of interviewing for and getting a new job. Gone was his center part and longer hair, replaced by a side part and much shorter hair. Vanished was the mustache which I wasn’t wild about, but we’d only started going out, so I hadn’t voiced that opinion just yet. But that smile? I’d know it anywhere. Thank goodness I hadn’t embarrassed myself and let him know I had no idea who he was for a few seconds.

But fast-forward and that incident became the germ of an idea, how someone could alter his appearance with a change of hair and shaving a mustache. Suddenly the idea for a hero was born, one bent on revenge for his best friend’s death. He changes his appearance and goes after the villain. Thanks again to my hubby for planting that seed in my brain long ago. BTW – he never grew the mustache back – thank goodness! He’s much cuter without it.

5 – Variety is the Spice of Life

I have very eclectic tastes. Most people would think a romance writer loves nothing but romance novels, soft ballads, and rom-coms. Not me!

My ipod has a mix of Elvis (naturally), the Beatles, the Eagles, Kanye, Hootie and the Blowfish, Panic at the Disco, Barry Manilow, and Boston. Kelly Clarkson might be followed by Train, Tom Petty, Styx, then Fall Out Boy. Aerosmith goes hand in hand with the Partridge Family, Michael Buble, or Pink. I love all kinds of music.

The same goes for books. I read about serial killers and detectives who chase them, then switch to a cozy mystery, YA, or a biography. I enjoy historical fiction and best sellers and everything from classics such as The Scarlet Letter or Pride and Prejudice to The Great Gatsby and To Kill a Mockingbird. What’s most important to me is a great plot with interesting characters, no matter what the genre.

So that’s Lauren Linwood in a nutshell.

As the third wife of an abusive French vineyard owner, Madeleine Bouchard hasn’t produced the expected heir after three years of marriage. Fearing he plans to kill her, she flees during a trip to England. Unable to make her way home, she joins a troupe of traveling mummers and reinvents herself as the only woman troubadour in the land, captivating audiences with both song and story.

Nobleman Garrett Montayne’s fascination with Madeleine causes him to pay the troupe to bypass their next stop in order to journey to his estate. Though he suspects Madeleine of being a thief with dark secrets, love blossoms between them under the magical moon of summer solstice.

But Madeleine’s past is about to catch up with her, as her husband is set to arrive to conduct business with Garrett. Madeleine determines to free herself from her loveless marriage and make a new life with Garrett, no matter what the cost.

Garrett tied Ebony to a tree and entered the forest. He’d spent many hours in these woods over the years and knew them better than anyone at Stanbury.

He found her immediately. She’d managed to pull herself partially onto the bank, but the rest of her remained in the stream. Though late June, the water was cold. No telling how long she’d been in it.

He ran to her, seeing she was unconscious. He lifted her out from the water, her skirts heavy and clinging to her. Her chilled body was deathly pale and still.

For a moment he thought her dead. Then she gasped. Her eyes flew open. Garrett saw the pain and fear held in them.

“’Tis all right, Madeleine, I’m here.” He brushed the wet hair from her brow. Her skin was so cold. He must warm her. He couldn’t lose her as he’d lost Luke.

She moaned. “Not again. Please, not again.”

Garrett lifted her shoulders and placed her head upon his lap. “What ails you, Madeleine? What’s hurt?” he asked gently, as he stroked her clammy cheek.

“My leg.” She began laughing hysterically. Garrett tried to calm her but didn’t succeed. Finally, her laughter subsided into weeping.

“’Twill be all right, Madeleine,” he assured her. “We’ll get you back to Stanbury. You’ll heal.”

She stared into his troubled eyes, her own a stormy color. “Heal? I’ll never be whole again.” 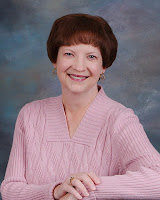 As a child, Lauren Linwood gathered her neighborhood friends together and made up stories for them to act out, her first venture into creating memorable characters. Following her passion for history and love of learning, she became a teacher who began writing on the side to maintain her sanity in a sea of teenage hormones.

Lauren’s novels focus on two of her favorite eras, medieval times and the American Old West. History is the backdrop that places her characters in extraordinary circumstances, where their intense desire and yearning for one another grows into the deep, tender, treasured gift of love.

Lauren, a native Texan, lives in a Dallas suburb with her family. An avid reader, moviegoer, and sports fan, she manages stress by alternating yoga with five mile walks. She is thinking about starting a support group for Pinterest and House Hunters addicts.

Keep in contact with Lauren through her various sites: