A warm welcome to Millie who has stopped by to share with us five things about herself. Pay attention, in case there's a quiz at the end (just kidding...maybe ;-)).

I’ll go back to the earliest thing that I believe influenced my thinking. (For Life) Would you believe that it was a Hanna-Barbara cartoon? When I was about five years old, an action/ adventure series came on television. I think it was 1965. The name of the show was The Adventures of Jonny Quest.

In the series, Jonny and his friend Hadji, travel with his father, Dr. Benton Quest to far away countries for scientific adventures. Dr. Quest sometimes works for the United States Secret Service, and has a body guard by the name of Race Bannon. I experienced my first crush at age five on Race Bannon.

As I grew older, I found that I had a love for travel and exploring rural areas. I think this is exhibited by the locations I write about in my novels (So far, I have visited the places that I have written about.)

There was also my infatuation with Race’s piloting skills. In my early twenties, I became a commercial and instrument rated pilot, eventually earning the Airline Transport Pilot Rating while I was a captain at Sunbird Airlines. My last full time flying job was with United Parcel Service. After my daughter, Whitney, was born, I stopped flying full time and went into real estate.

The next thing that impacted my life was a tragedy. When I was ten years old, my father died. He was just forty-two, and one of the finest men I have ever known. He was a Boy Scout leader, and one evening after a Boy Scout banquet, he had a massive coronary and died. I’ll never forget my mother holding his hand and not wanting to let go when she realized he had passed away. The next morning there was snow on the ground—a rarity in South Carolina.

In The Cast Net, I reference this experience through my heroine, Mills. The falling snow and the flashing lights of the ambulance that takes her father away have left lifetime emotional scars.

I am a cat person. I love cats. When I was a child, my mother allowed us to have several cats at a time. One of our cats had kittens, and for an eight year old that was pretty exciting. One of my cats, Calhoun, lived for seventeen years; when she died, I was devastated. I went for several years without having a cat friend. Then my neighbor found a wild kitten in his grandmother’s garage and gave her to me. After Barney came into my life, I realized what a mistake I had made by depriving myself of a cat. At present, there are four cats that live with us. Three are rescue cats, and one, the only man in the bunch was picked out by my daughter from a barn cat’s litter. His name is Moose.

I am a lousy shot with a shot gun. In The Cast Net, I write about hunting adventures and shooting sporting clays with a shot gun. Every year, my husband plants millet, sorghum, and wheat on our farm. On the opening day of dove season, we have a get together with our hunting friends and shoot dove. They are a delicacy cooked on the grill. I try shooting, but I find I am a very poor shot. All I seem to get is a sore shoulder.

In The Cast Net, my heroine, Mills, learns how to shoot a shotgun, shoots sporting clays, and actually has a successful duck hunt with the hero, Cooper. She’s a much finer marksperson than I am!

My hobby is gardening. While I was working in real estate, I began a long range plan for establishing a garden on our property. I have planted ancient camellias from Middleton Place, near Charleston, South Carolina. The horticulturists at Middleton Place take the seeds from camellias that have been on the plantation for hundreds of years and produce seedlings. I have at least twenty camellias propagated from Middleton Place. In addition, I have an area in my yard with a fountain that is surrounded by numerous varieties of hydrangea. They are so lovely at the beginning of June!

Thanks, Millie, for sharing with us today! You can enjoy a sneak peek of the first chapter of Catherine's Cross here: http://bqbpublishing.com/wp-content/uploads/2013/03/Catherines-Cross_sneak.pdf.

When Jenks Ellington experiences a sudden, alarming sense of panic about her identical twin sister Gigi, she has to wait until nearly midnight before learning the reason for her unease: Gigi has drowned while diving for artifacts in a Low Country river near Beaufort, South Carolina. Although Beaufort County detective Seth Mason is suspicious of Gigi’s diving partner, there is no evidence of foul play. But, when Gigi’s Port Royal home is broken into and ransacked, Jenks discovers two clues—one of which leads her to the home of a local Gullah medium.

In a painstaking search for answers, Jenks delves more deeply into her twin’s life. Along the way, her bond with Detective Mason reaches unexpected depths. And what secrets could medium Meta Jane be holding? Was Gigi’s death really an accident? 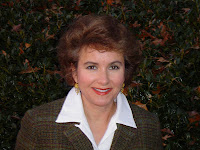 A graduate of the University of South Carolina, Millie West has a background in aviation, as well as in real estate, and has owned and been the broker of her own company. A licensed pilot, Millie was one of the first pilots hired by United Parcel Service when they started their flight crew department.

An artist in her own right and a collection of regional art—especially from Charleston—Millie is a supporter of charitable organizations, higher education, and the preservation of South Carolina’s historical treasures. A South Carolina history buff, Millie has spent countless hours exploring the rich historical vestiges of her home state. She has viewed many treasures of the past by taking less-traveled paths into the countryside that was inhabited by Native Americans hundreds of years ago.

Her love of the fascinating, complex, and compelling history of the South is expressed in her writing.

Millie resides with her family near Columbia, South Carolina, and is an active participant in her local writers’ group, the Chapin Chapter of the South Carolina Writers Workshop. To learn more about Millie West and her first novel, The Cast Net, and her latest release, Catherine’s Cross, visit www.milliewestauthor.com or http://bqbpublishing.com/authors/millie_west/.
Posted by MJ Thomas at 4:00 AM