A Darker Rain by Claudine Kapel - Book Review and Giveaway

This post is part of a virtual book tour organized by Goddess Fish Promotions. Claudine will be awarding a $20 Amazon gift card to a randomly drawn commenter during the tour. Click on the tour banner to see the other stops on the tour. 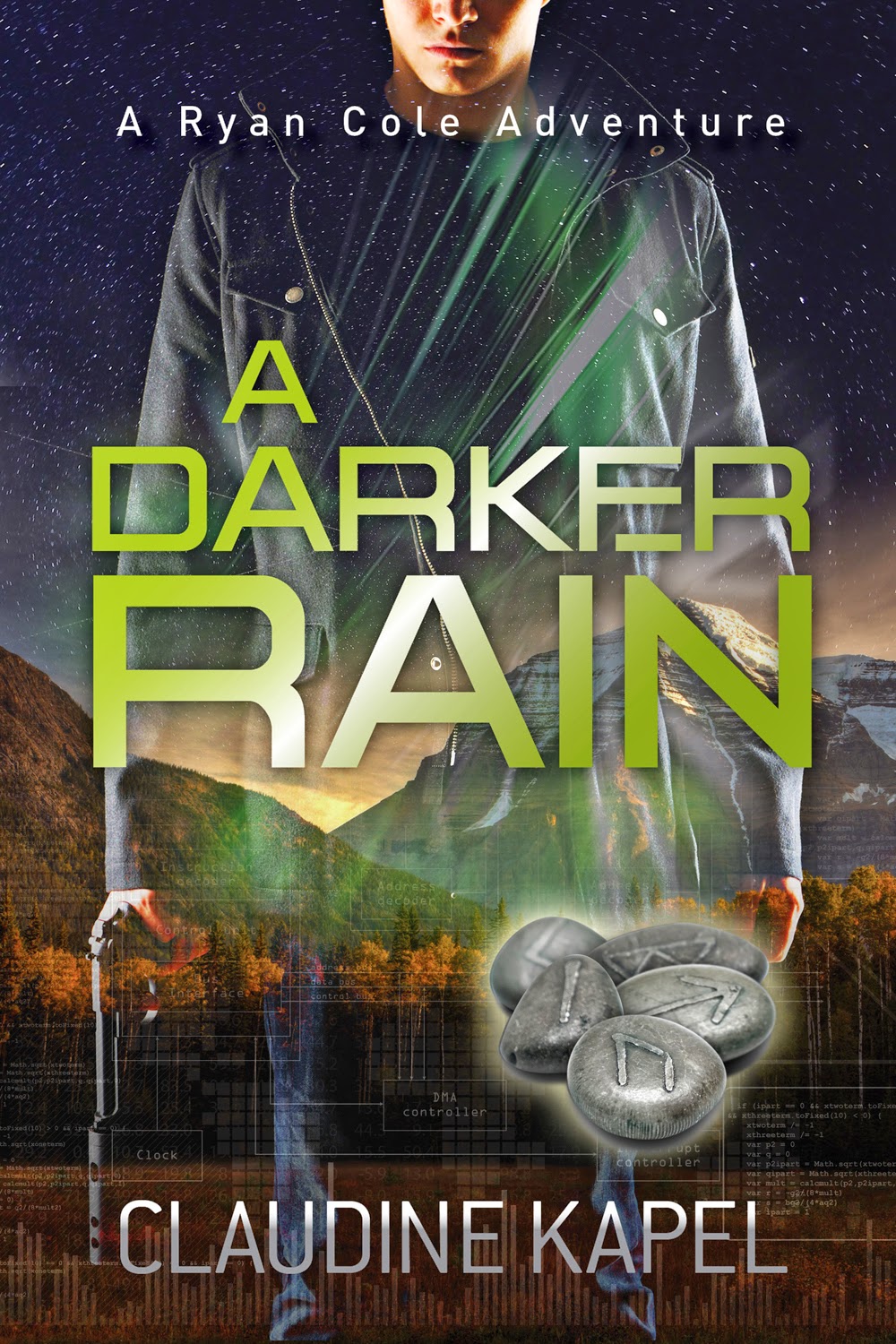 “It’s definitely not a good time to be going into the woods of Hawkley Ridge.”

When a red-eyed wildcat starts threatening ranchers in the Pacific Northwest, Ryan Cole recognizes the danger is far more menacing than the ranchers realize. Cole specializes in tackling unconventional security threats, particularly those with alien origins.

His investigation puts him in the crosshairs of Antoine Drake, an international arms dealer with a penchant for weapons from other worlds. Both men are hot on the trail of powerful alien artifacts known as guardian stones.

Cole and his team of investigators embark on a dangerous quest to recover the guardian stones before they can be assembled into the ultimate alien weapon. To succeed, Cole must also decipher the wildcat’s deadly secrets.

But in the woods of Hawkley Ridge, it’s easy for the hunter to become the prey. A Darker Rain is the first book in the Ryan Cole series.

A very welcome addition to the world of Science Fiction/paranormal investigations and investigators. This book reminded me in tone of Kay Hooper's Bishop/SCU series meets NCIS meets Stargate. There are psychics, aliens who look human, mysteries to solve, bad guys to win again, a treasure to find--with a touch of romance. What's not to like?

The author has done a wonderful job at drawing memorable characters with some of the secondary characters being my particular favorites. They work together as a team and each of them are fully drawn, with faults and foibles that they strive to overcome.

The plot is cohesive... with just the occasional info-dump as the author gives some backstory relevant to the situation. But it was not enough to ruin my appetite for the book.

All in all, it was an excellent debut and I look forward to seeing more stories and adventures from the Sigma Corporation. 4 flower. Enjoy an excerpt:

“We now have two stones and the amulet,” said Jackson, barely containing the excitement in his voice. “And you know what they say—you can’t make an omelette without breaking a few eggs.” “Yeah, and you know what they say about good intentions and the road to hell,” Cole countered. “Our goal is to collect all the stones so we can make sure no one parlays them into some sort of ultimate weapon. That includes us. The last thing we want to do is unleash a weapon like that ourselves.”

“The Rajan understood how the amulet worked, and they decided to take it apart and scatter the pieces across two continents,” Ashcroft added.

“Yeah, but that was hundreds of years ago,” argued Jackson.

“And we’ve evolved so much as a species that we can handle that kind of power now?” countered Cole.

“You’re right,” agreed Jackson. “But as scientists we have to learn more about the stones and how they work.”

“Far be it for me to get in the way of scientific inquiry,” said Cole. “I’m not saying you can’t study the stones or the amulet—just that we’re not putting them all together.” That had been a longstanding rule. Cole wasn’t about to create an unprecedented weapon and unleash it on the world.

“I know what you’re saying, Cole,” said Jackson. “But that’s like saying we should study the atom but not try to split it.”

About the Author: A Darker Rain is Claudine Kapel’s first novel. She lives in Toronto and enjoys books, music, and travel. When not working as a consultant, she can be found writing, reading, or contemplating what else may be out there.

The second book in the Ryan Cole series is planned for release in 2014. Claudine loves to hear from readers. You can reach her by e-mail at claudine@claudinekapel.com.