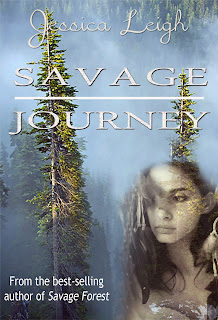 This review is in conjunction with a virtual book tour organized by Goddess Fish Promotions. Jessica will be awarding a $15 Amazon GC to TWO randomly drawn winners via rafflecopter during the tour. Click on the tour banner to see the other stops on the tour.

On the day of Katari's traumatic birth, a 12 year old orphaned boy named Nicholas Belline is caught stealing a beaver pelt by a merchant along the rough waterfront of Montreal. Guilty, he is forced into servitude as a French-Canadian Voyageur - an adventurer - with a band of uncivilized men within the wilderness along the mighty Saint Lawrence River. In a world fraught with peril at every step, he grows to manhood among the roughest of men, as a Coeurer de bois - a Runner of the Woods.

By the age of 17, Katari knows only one thing: she craves a life of adventure - outside the boundaries of her quiet, little family village. Although gifted with the talent of healing, passed on by generations before her, the restless Katari rejects her calling. When her twin brother, Grey Wolf, sets out on a journey of a lifetime to the bustling White trade settlement of New Amsterdam, Katari is by his side to experience it all. Little do they know that the eastern colonies are on the brink of war, and that their risk grows with every step.

On the very night of an English invasion, Nicholas Belline rescues an injured and unconscious Native girl from within the battered rigging of a horrendous accident brought about by the terror of the city's inhabitants. Little does he know that the keenly bright and passionate Lenni Lenape girl is about to change his life irrevocably, and set him forth on a fierce journey of his own. When Katari ultimately returns to her people, Nicholas must battle the demons of his childhood upbringing and change his untamed nature to win back the love of a woman like no other in a wild New World.

Savage Journey continues the Savage series by Jessica Leigh, sharing the story of Katari, the daughter of Jenna and Running Wolf from Savage Forest. Katari has inherited every bit of the fire that made her mother a match and mate for Running Wolf. She has been raised with a freedom and a love for adventure and possesses the gift of healing. Her parents allow her to go on a special trading expedition with her twin, Grey Wolf.

During the same period, the story of Nicholas Belline is shared--beginning from the time he joins the Coeurer de Bois, the same date of Katari's birth, and his growth to mankind.

Their paths cross when he rescues Katari --and puts into action a special relationship.

Because this is a romance, there is no question about the outcome, but in Savage Journey, the journey really is the thing. Ms. Leigh does an excellent job drawing the reader into the danger, excitement, action, and love that develops between not only these two strong characters, but also secondary characters in the story. The books moves so fast, I was finished with the book before I realized it.

The characters are well drawn with both strengths and flaws-- Katari is stubborn, with the head-strong character she inherited from both her mother and father. Nick has his flaws as well--refusing to see that is right in front of his face.

I'm looking forward to the next offering in this series (Grey Wolf's story, please, Ms. Leigh?). 4 flowers. a Rafflecopter giveaway
Posted by MJ Thomas at 3:30 AM