This post is part of a virtual book tour organized by Goddess Fish Promotions. Jeana will be awarding a $40 Amazon GC to a randomly drawn winner via rafflecopter during the tour. Click on the tour banner to see the other stops on the tour.

Jeana has shared five things about her we might not guess or already know. Welcome, Jeana!

Wow! This is a great topic (and a little scary too). Well, I’m brave so here goes.

First, I am incredibly near-sighted – to the point that I can barely find my way around the house without my glasses or contacts. And now that I’m getting older, I wear contacts AND reading glasses. How embarrassing is that!

Second, I have a secret collection of hats. Some of them were acquired through my travels (sombrero from Mexico, straw hat from Hawaii). Others are remnants from showing horses as a teenager (bowler, derby, cowboy hats). Some were purchased at rummage sales and antique shops. My favorite is a leather cap worn by a little boy back in 1902. It came in a box of miscellaneous junk purchased from an estate sale along with a picture of the boy. I like to imagine the lives of the people who wore them and the stories those hats could tell.

Third, I don’t like clowns. At all. Stephen King’s book It nearly sent me over the edge and I have never looked at a clown the same way since. Even Ronald McDonald gives me the creeps!

Fourth, I have a “thing” about keeping my food separated on the plate. Those disposable plates with the dividers? Love, love them! I avoid eating pancakes and syrup because the syrup might escape and touch something else. Some people call that a control issue. I call it organized eating.

Fifth, I love old black and white movies. Humphrey Bogart, Lauren Bacall, Lana Turner, and Katherine Hepburn are some of my favorite actors. When I was a kid, I would stay up late at night to watch reruns. Back then, movies were larger than life and so melodramatic. I think those movies shaped a lot of my imagination and storylines that I use today.

Okay, I just read through my answers and realized that I sound like a total lunatic. I hope you enjoyed the craziness. It’s been great fun sharing a few of my secrets with you. Thank you so much for stopping by! 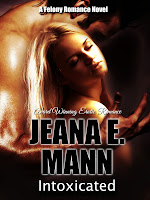 Love is intoxicating, but the hangover can be agony...

Conservative, straight-laced Ally Taylor has the perfect life – successful fiancé, beautiful home, great career – until she catches her fiancé and best friend in bed. Desperate to shake off the sting of rejection, Ally heads to Felony, a notorious heavy metal club on the bad side of town. Even more dangerous than the bar is Jack Jameson, the hunky alpha male bartender whose smoldering dark eyes and dimpled smile turns her common sense to mush and her knees to noodles. After eight long years in a failed romance, the last thing Ally wants is to hook up with someone like Jack, but she can’t help wondering if he’s really as good in bed as his reputation suggests.

Jack Jameson has had his eye on Ally for months, drawn to her smart mouth and tightly wound self-control. When Jack finds Ally sitting on a barstool in his club, heartbroken and miserable, he’s more than happy to offer a little heat between the sheets to distract her. Too bad Ally’s not interested in his “hit-it-and-quit-it” philosophy. If only Jack could convince Ally that he’s tired of the endless parade of girls through his bedroom, she might see him in a different light.

When Jack and Ally get together, everything goes wrong and it’s more than either of them bargained for. Ally’s got serious trust issues and a need for control that makes Jack crazy. Jack’s got more baggage than an airline carousel; the constant stream of women from his past stirs up all of Ally’s insecurities. Can Ally overlook Jack’s womanizing past and learn to trust him? Will Jack be able to commit to just one woman or will a secret from his past ruin everything?

Miss Ponytail had taken up residence in Jack’s Seat of Shame. The girl had one hand on Jack’s arm, rubbing the swell of his tattooed bicep with a sly smile on her crimson red lips. Upon seeing Ally, Jack deserted the new girl, grabbed two shot glasses and a bottle of Jack Daniels from behind the bar, and took up the empty barstool next to her.

“That’s some crazy shit, them showing up here like that,” he said as he filled both glasses and pushed one towards her. “I admire your control. I probably would’ve punched one of them in the mouth.”

For the millionth time that day, she withered with embarrassment. She decided to pretend indifference to cover her shame. “I don’t have any idea what you’re talking about.”

“That. Over there.” He jerked his head in the direction of the happy couple. “They’re having a bit of a disagreement over whether to leave or stay. Seems your presence has shaken them up a little. Wanna know what they said?”

The question gave birth to a dozen more emotions that she didn’t want to face. A flush crept up her neck and into her face. The heat of it burned her cheeks. “Didn’t your mother ever tell you that eavesdropping is impolite?”

“She did,” he admitted with a flash of dimples, “but I learn the most interesting things that way.”

Jeana Mann is the author of sizzling hot contemporary romance. Her debut release Intoxicated was a First Place Winner of the 2013 Cleveland Rocks Romance Contest and a finalist for the 2014 Carolyn Readers Choice Award.

Jeana was born and raised in Indiana where she lives today with her two crazy rat terriers Mildred and Mabel. She graduated from Indiana University with a degree in Speech and Hearing, something totally unrelated to writing. When she’s not busy dreaming up steamy romance novels, she loves to travel anywhere and everywhere. Over the years she climbed the ruins of Chichen Iza in Mexico, snorkeled along the shores of Hawaii, sailed around Jamaica, ate gelato on the steps of the Pantheon in Rome, and explored the ancient city of Pompeii. More important than the places she’s been are the people she has met along the way.

Buy the book at Amazon, Barnes and Noble, All Romance eBooks, Google Play, or iTunes