This post is part of a virtual book tour organized by Goddess Fish Promotions. The author will be awarding a $10 Amazon Gift Card to one randomly drawn winner and a bookmark to 20 additional winners via rafflecopter during the tour. Click on the tour banner to see the other stops on the tour.

Will he sacrifice his wings for a woman he loves but can never keep?

Jade Ashley has a past she’d like to forget and a destiny she isn’t aware of. A stranger, Clyde, saves her from an attack and demonstrates extraordinary abilities she believed only she possessed. She soon realizes he’s her guardian angel sent to reunite her with her long lost sisters, who like her are part of a new breed of immortals, Elementals, prophesied to determine the outcome of the upcoming war.

Clyde, an angel, battles the one thing he believes will lead to his fall from heaven—his new found emotions, forbidden among his kind. Nonetheless, the Angel Lords promise to promote him to warrior when he completes his last assignment—to find Jade. When he does, emotions he never knew possible arise. For the first time in two thousand years, he curses his existence, knowing she can never be his. Will he sacrifice his wings for a woman he loves but can't keep?

Clyde swallowed, summoning the courage to ask, “Is she yours?”

A wave of relief washed over him, and he released a breath. Exhausted from his fear, anger, jealousy and the scorching pain eating him alive, he didn’t respond to Jacob’s goad. He knew, despite what everyone else believed, Ashley wasn’t his because he was an angel.

She wasn’t Jacob’s either, but he knew every time Ashley spent time with another immortal male his fear would again rear its head. It would only happen so many times before she met him—her mate. Each time, it would be more painful than the last.

Before he found the energy to turn and walk away, he acknowledged: If it hurts this bad now, when she finds him, it’ll kill me. 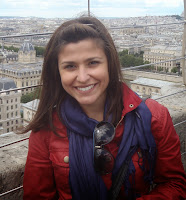 J.L. Sheppard was born and raised in Miami, Florida where she still lives with her husband. As a child, her greatest aspiration was to become a writer. She read often, kept a journal and wrote countless poems. She attended Florida International University and graduated in 2008 with a Bachelors in Communications. During her senior year, she interned at NBC Miami, WTVJ. Following the internship, she was hired and worked in the News Department for three years.

It wasn’t until 2011 that she set her heart and mind into writing her first completed novel, Demon King’s Desire, which was published in January of 2013.

Besides reading and writing, she enjoys traveling and spending quality time with family and friends.

Buy the book at Wild Rose Publishing, Amazon, or Barnes and Noble.