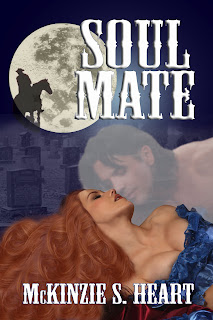 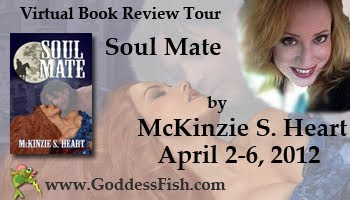 This review is done in conjunction with the author's virtual tour with Goddess Fish Promotions. McKinzie is giving away a $20 Amazon GC to one lucky commenter during her tour, so comment today AND follow the tour (if you click on the tour banner above, it'll take you to a list of her tour stops) -- the more you read and comment, the better your odds of winning. You could be introduced to a great new author AND win a GC!

It is 1882 Midwest North America and fiery Scottish lass Katlyn MacKenzie has inadvertently found herself working in a local saloon after her father’s death.

Handsome cowboy James Granger wants Kate more than he’s wanted any woman before so he is determined to make her his come hell or high-water. She is tempted by his heated, experienced touch but will she succumb to his charms or will another stake his claim? For, in steps a strange suitor that will not be denied in his own quest for Kate’s heart, body, and soul. His scorching kiss competes with James’s touch while they both pursue her. But who will she choose? Because though one offers passionate life and the other offers blissful death, only her Soul Mate can claim her.

I wasn't sure what to expect when reading this book ... or who to root for as the hero! It's hard to say much about the plot itself without giving away spoilers, so let me just state that McKinzie S. Heart has a fascinating idea here, unique and interesting. I'm an avid reader and can honestly say I've never read this particular plot before.

My only complaint is that things felt terribly rushed. I really appreciated the clever plot, so was frustrated at the breathless pace we were pushed through the story. I would have liked more information about the heroine's "sensitive" nature, would loved to have met the hero prior to his, hmmm... unfortunate circumstances. I just think it could have been so much deeper and complete with more pages. It might be a reflection of my interest in the storyline that I wanted more!

I did love the ending, though, as it was a HEA for all concerned and well executed. If this is a clue into the breadth of imagination of the author, then I'll be on the lookout for more!

For a unique and hot romance with a twist you wouldn't expect, I'd recommend Soul Mate, especially if you're short on time and want a quick snack instead of an entire meal.

Soul Mate is published with Rogue Phoenix Press. Elemental Seduction #1 – The Dance and Elemental Seduction #2 – Requited by Fire are two books in an anthology of four published with Silver Publishing. Dark Moon Harvest is in rewrite. Her readers claim that her adult works are "wickedly entertaining" and that "I couldn't put the story down until I read the whole thing!" She hopes that you, too, enjoy one of her stories today!

FTC Disclaimer: I received a copy of this book from the author and Goddess Fish Promotions in exchange for my honest opinion.
Posted by MJ Thomas at 12:01 AM