Virtual Book Tour : Visions of You by C. Y. Bourgeois 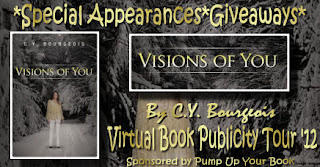 Today we're welcoming author C. Y. Bourgeois to the blog on her tour with Pump Up Your Book for her thriller novel, "Visions of You".

I asked her why she enjoyed writing in the genre.

The Joy of Writing Suspense Thrillers

For me, the best thing about writing suspense thrillers is that they surprise and astonish me even as I’m writing.

When I started writing Visions of You, I wanted to write a kind of anti-Twilight book, a book about real “vampires”.  I have nothing against the Twilight series, having read it myself, but the vampires in the series were portrayed as supernatural, just like they always are and I wanted to delve into the secret world of real vampires.

The truth about vampires is that they are real and they live among us.  There are many people who believe themselves to be either sanguine (bloodthirsty) or psychic vampires/vampyres.  They are not supernatural beings, just people, like you and me.  I did a lot of research, some of the information I found seemed pretty far-fetched, but mostly I discovered that these people are just like everybody else, with one small difference, they crave blood and whether it’s psychological or physiological, it’s real.

One of the other huge surprises I got was when I started out writing Visions, it was mainly about Paul and his condition, but as I was writing, the story kept changing, surprising me at every turn.  Eventually the story’s point of view changed and became the main character.  I was astounded by how the story morphed into something completely different than how started.

I was amazed by how Visions of You unfolded during the writing process.  Many times my fingers couldn’t keep up with my thoughts as I felt the characters emotions.  I experienced their fear, sadness, happiness, and was surprised right along with them as I wrote.  The dialogue surprised me too.  It just came out of each character as though they were standing in the room with me.

In my very humble opinion, the best thing about writing suspense thrillers is the same thing that’s so great about reading them.  They take the writer as well as the reader on a thrilling rollercoaster ride, twisting, turning, and surprising at every turn. 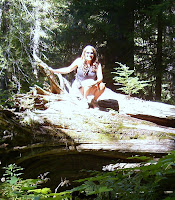 ABOUT C.Y. BOURGEOIS
C.Y. Bourgeois is a freshman author and an avid reader. After having spent countless enjoyable hours over the years reading other people’s narratives, she realized that she too has stories to tell.

C.Y. considers herself a native of , having lived there since the age of two.  She and her husband recently moved to northern where they now reside with their two dogs and three cats and where she is currently working on her second Shelby Leight novel, Visions of Mortality.

Her latest book is a suspense thriller (bordering on YA) called Visions of You.

ABOUT VISIONS OF YOU

Shelby Leight is a wise-cracking, lighthearted teenager, looking forward to a fun-filled senior year in high school.  She already knows the pain of losing a loved one, but has worked her way through the grief to come out on the other side.


Then, in the fall of 1975, in the sleepy, picturesque town of , the unthinkable happens.  There’s a serial killer on the hunt and one of ’s best friends has disappeared.


The sudden loss of her friend in such a violent manner awakens something in her, an ability to communicate with the dead….visions.  In the midst of all this, falls in love for the first time only to discover the shocking truth about her boyfriend.  Can she accept him for who – what he is?  Can her friends and family accept him?


has a vision of the killer stalking another of her friends and is desperate to stop him before it’s too late.  Instead of an enjoyable senior year of high school, Shelby and her friends must come to grips with life and death – and all they hold – in their quest to find a monster before he kills again.