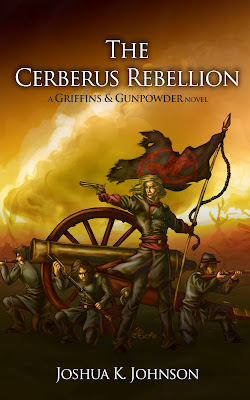 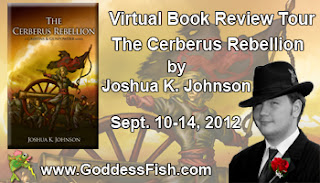 This review is done in conjunction with the author's virtual tour with Goddess Fish Promotions. The author will be awarding .mobi copies of his short stories (details available at www.gunpowderfantasy.com/products ) to one commenter at every stop. Grand Prize for one random commentor and host with the most comments: The Chesian Wars collection (all published 3 short stories and an additional prelude short story exclusive to the collection), so comment today AND follow the tour (if you click on the tour banner above, it'll take you to a list of his tour stops) -- the more you read and comment, the better your odds of winning. You could be introduced to a great new author AND win a fun prize!

One hundred years of peace and prosperity. War changes everything.

On the world of Zaria, Elves, magic and mythical beasts coexist beside rifles and railroads. The futures of two nations hang in the balance as rebels and revolutionaries trade gunfire with loyalists and tyrants.

Eadric Garrard was raised to believe that as the rightful King of Ansgar, his loyal nobles and fearful subjects answered to his every whim, no matter the cost or consequence. His decision to send his troops thousands of miles away will test that fear, and loyalty.

Raedan Clyve was ordinary until an Elven ritual involving a griffin’s heart turned him into something more. Twenty years later, he still struggles with the magics that rage through his body. His mentor holds him back from his full potential and he faces pressure to find a suitable wife and father an heir.

Hadrian Clyve has picked up where his father left off and works to expand his family’s influence amongst the Ansgari nobility. His aggressive negotiation of alliances and shrewd choice of marriage agreements has earned him respect, and resentment. When his King calls his troops to arms, Hadrian has other things in mind.

After a century of scheming and decades of preparation, Magnus Jarmann is ready to bring his family’s plans to fruition by launching a war of independence that will free his people and return his country to its rightful place among the nations of Zaria. The King’s call to arms creates an opportunity that Magnus cannot afford to miss.

In a war, little is held back; in a revolution, nothing is safe.

In this complex book, we go to war.

I've never read what the author describes as "gunpowder" fantasy.  The mix of guns and other technology with true fantasy items like elves was a strange thing to get used to.  It wasn't bad, just different, and every now and then something would make me jolt and I'd be out of the story for a moment (like when the king tucked a newspaper under his arm ... it made me feel as though I was in modernish times and not in another world).

Kudos to the author for remarkably complex and complete world-building.  I do wish a map had been included with the book, perhaps at the front for reference, as this is a very diverse place and the author is quite definite about setting.  I imagine him writing in a room with maps and pictures of each character with incredibly lengthy character information (perhaps pages and pages on each person).  It really is amazing how much he clearly knows about everyone in this book -- and there are many, many characters which populate it.

This is not an easy read, but it's an interesting one.  Much of the time, in the beginning, I wasn't sure who to root for.  Should I sympathize with the king? With the rebels?  As time and pages passed, my allegiance became firmly entrenched with one side, but I could understand the feelings of the other.

While I enjoyed this book immensely, and thought the story was quite good, there were some things that slowed down the reading.  The book suffers a bit from narrator intrusion -- we get lengthy descriptions of fairly unimportant things (clothing, room decoration, etc) and much is told, not shown.  Instead of "showing" us a person's tattoo, we're told he has one and what it's of.  Instead of learning a character's personality through ongoing observance, we're given paragraphs of information up front.  It was a bit frustrating, and I had to fight skipping entire paragraphs when this happened.

Still, as mentioned, the plot line was intriguing.  It's very complex, and I was fascinated by the way so many things were interwoven.  The author must have carefully planned this book, because I can't imagine something this involved just happened by chance.

If you enjoy books with amazing world-building, if you like to read about the ins and outs of war on many fronts, if you like your fantasy mixed with a bit of technology you're going to love this book.  One thing of note, however:  it's clearly the beginning of a series.  Don't read this expecting all the loose ends to be tied.

Joshua Johnson is the author of "Gunpowder Fantasy" The Cerberus Rebellion (due to release in early July) and the creator of the Griffins & Gunpowder universe. When he isn't working or spending time with his family, he writes novels, short stories and novellas.

He currently lives in Northern Illinois with his wife and young son.