Circle of Deception by Carla Swafford - Virtual Tour and Giveaway 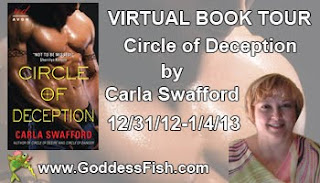 Today we're visiting with author Carla Swafford on her tour with Goddess Fish Promotions for the romantic suspense novel, "Circl of Deception".

Carla will be awarding copies of the first 2 books in the series, choice of eBook or print (Print-USA Only) to a randomly drawn commenter during the tour. Additionally, Carla will award the winner’s choice of a $10 Amazon or BN GC to one commenter at every stop, so comment today AND follow her tour (if you click on the banner above, it'll take you to a list of her tour stops)! The more you read and comment, the better your odds of winning. You could be introduced to a great new author AND win books or a GC!

The floor is yours, Carla. Thanks for answering all my prying questions.

Thank you for inviting me here. I love seeing where three generations enjoy a good book. My father and his were voracious readers, and in the last few years, my oldest daughter has joined the ranks. We’re working on encouraging my grandson to be a reader too. Now for the questions you asked.

After writing a historical romance and several paranormal romances, I decided to write a contemporary romance, and before I realized it, the story had murder and mayhem in it. Since it was so much fun, I wrote another one after that and placed them in a few writing contests. Though they did well, I wanted to write something bigger.

We’re told as writers to write what we love to read. Well, I love anything with spies and assassins in it (as long as there is a love story in it too), especially TV shows like La Femme Nikita and movies like James Bond. So CIRCLE OF DESIRE was born . . . uh, written.

There are two aspects I enjoy about those types of books. One, the characters believe they’re making a difference. It may be good or bad but they’re the best of the best in their field and don’t have to apologize for it. Two, the heroines are as strong as the heroes, not in physical strength ― due to genetics and all ― but endurance, skill, determination, and yes, I dare to say it, sexual needs.

Varied. The biggest has been on guns, such as what they sound like when shot (YouTube), what damage they do (college studies), and even how heavy they are (manufacturers’ websites). Other researches include DPVs (Diver propulsion vehicles), scuba diving, the Everglades, knockout drugs, listening devices, hotel layouts, arm dealers, airplanes, microchips, razor wire, ammunition, and languages.

One of my favorite things to use for research, if I need to look at the terrain or city up-close, is Google maps. You can see how the streets are laid out and what the buildings look like. Or if there is wooden area behind a neighborhood (hoping it is a recent shot).

Abby Rodriguez’s home life wasn’t horrible like Rex’s but she always felt like an outsider. She never let it get her down. Instead she kept moving forward and made a life for herself. The same for the time she believed Rex had died. She made some mistakes but she continued to look ahead.

No superstitions and really no quirks that I know of, but I guess I have a habit of writing half of the book, stopping and then roughly plotting out the balance. I use a white board and Blake Snyder’s SAVE THE CAT. The book is for screenwriters but I’ve found it to be so useful.

I’m a pantser, as you can from above. And even though I sort of plot out the balance, I can and will change aspects without a thought.

Bookshelves, a cabinet holding my desktop computer and French doors that looks out onto a screen-in back porch. By the way, I have French doors to the left too.

Nothing at this time I really want to tell, not out of superstition, but I hate to mention something that doesn’t happen and disappoint people. But I do hope in the next couple months I can announce another contract with Avon.

How do you feel about stories with criminals as the lead characters? Examples are Mod Doctor, Sons of Anarchy, Sopranos, The Godfather (I, II,III), etc. Side note: I think the commonality of the examples is that family is important. 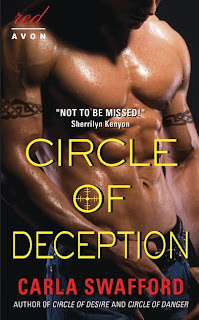 Carla Swafford’s super sexy Circle series continues with CIRCLE OF DECEPTION--the third in the series featuring assassins Abby and Rex, a couple with a past like a loaded gun.

Rex Drago wants answers from his ex-fiancé Abby Rodriguez. Her disappearance days before their wedding five years earlier had almost killed him, and he will go to any length to discover the truth. But she’s as determined to keep all of her secrets and pretend she’s in love with his brother.

When her family is threatened by an arms dealer, she must accept Rex’s help in stopping the man. As they work undercover as husband and wife, the act feels too real, especially when they’re thrown into a situation too hot to handle. They must play a part or blow their cover and possibly lose Abby’s family.

Then she heard the noise behind her, a mechanical twirl ending with a clank.

“What the hell?” Rex released her and backed up. “Damn it! They closed off the vent before anyone else could get in here. We better start moving in case we get trapped. They might have it set to close at the other end too, wherever the hell that is.” He pushed her butt to get moving.

“Okay, okay. I’m moving. Keep your hands to yourself.”

“That’s not what you said the other night.”

“Oh, do you really think this is the time and place?” She snapped back.

He grunted but didn’t say anything else as they crawled as fast as possible down the vent. Then they could see daylight. The sun was up. And there was a thick grille across the opening with a lock. Crap!

“What do we do now?” she asked. The huge steel lock meant business.

“Move over, flat against the wall. I need to get by you.” Rex pushed on her to hurry. The width of the vent didn’t equal the height.

“Go over?” Did she hear him right? He wasn’t smiling. She moved into position.

Stretched out on her stomach, she felt his big body slide over hers. His groin rubbed up her butt and then her upper shoulders before brushing her hair, and he reached the grille. Why would something so crazy send tingles scattering across her body? Definitely not the time or place.

At that moment, the metal beneath them began to shake.

Carla Swafford’s personal life isn’t as exciting as her characters’. She lives in Alabama and is married to her high school sweetheart. A third generation storyteller, she enjoys all kinds of romances and loves writing about the different paths taken to that beautiful happily ever after.