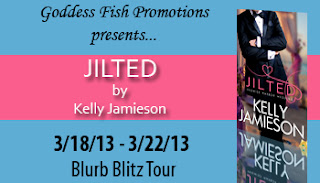 Kelly will be awarding a $15 Amazon or BN GC to a randomly drawn commenter during the tour, so comment today AND follow her tour (if you click on the banner above, it'll take you to a list of tour stops)! The more you read and comment, the better your odds of winning. You could be introduced to a great new author AND win a really cool prize!

The wedding’s off but the honeymoon is on...

Truth is, her life isn’t so fabulous. She’s just been downsized out of her job, her Jimmy Choos won’t pay her rent, and...she’s still heartbroken that Josh chose family over her. The real reason she’s enduring this wedding is that her next stop is nearby Greenbush Island, her last hope of finding a new job.

Josh knows marrying long-time friend Allie will make everyone happy after the rough time their families have been through, and since the woman he really wanted to marry chose her career and big city life over him—why not?

But the perfect wedding turns into a perfect disaster when Allie leaves him at the altar for another man. He never saw that coming! But hey, Devon’s there, offering to help him look for Allie on Greenbush Island, where he’d planned their honeymoon. Only, all they find are their old feelings for each other and a temptation to risk their hearts one more time...

Warning: This book contains a firefighter hot enough to ignite flames, a woman who doesn’t want to get burned again, a honeymoon suite but no honeymoon, and sex not on the beach (sorry).

Helping Josh find his fiancée? Yeah, that sounded like a lot of fun.

At that moment, Devon was tempted to climb over the railing, jump off the boat and swim to shore. Her heart picked up speed and her breathing went shallow as anxiety gripped her. What the hell was she doing?

She forced herself to breathe normally, drawing air into her lungs slowly, fresh briny sea air, forced herself to relax her death grip on the railing. William Mudge. The position at Heffington International. The job she so badly needed, not just to pay her rent, although yeah, that was pretty damn important, but because her career was who she was. It was, sadly, all she had. So, that was what she was doing. This was going to work out perfectly. She stole a glance at Josh.

What if they found Allie there? Then what would they do? Was Josh going to try to fight for her? This could get ugly.

But what if they didn’t find Allie? She had no idea what would happen then.

Josh leaned on the rail beside her and they both stared out at the ocean, undulating in shades of gray and blue, creamy whitecaps dotting the surface here and there. Seagulls soared above, the lowering sun illuminating them pure white against the clear blue sky.

“So,” Devon said. “You and Allie planned to spend your honeymoon on the island.”

“I planned it,” he said. “I just told her about it yesterday so she’d know what to pack.”

“Yeah.” He lifted one big shoulder. “I thought it would be nice. Not too far away. And there are lots of things to do on the island.”

Devon pursed her lips. On a honeymoon, you wouldn’t think they’d care about things to do—beyond getting out of bed to answer the door for room service. But what did she know about honeymoons? Nothing, that’s what.

Kelly Jamieson is a best-selling author of over twenty-five romance novels and novellas. Her writing has been described as “emotionally complex”, “sweet and satisfying” and “blisteringly sexy”.

Where you can find Kelly: