Ennara and the Fallen Druid by Angela Myron -- Interview and Giveaway 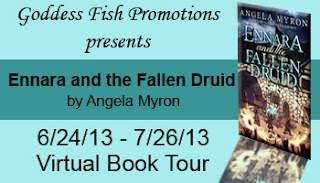 This post is part of a virtual book tour organized by Goddess Fish Promotions. Angela will be awarding to a randomly drawn commenter during each week on the tour, a wall calendar print from http://www.cafepress.com/ennaraswag (Items can be exchanged for other equal or lesser value items from Ennara Swag on Cafepress.), and will award a t-shirt from http://www.cafepress.com/ennaraswag to one randomly drawn commenter during the tour (US ONLY). Click on the tour banner to see the other stops on the tour.

Thanks to Angela for stopping by and answering our questions.

Why do you write in your genre? What draws you to it?
It’s the sense of possibility in fantasy and science fiction that I find exciting. That between these covers are people just like me, living in a world where they can fly on dragons, battle with robots, and undertake heroic journeys. It reminds me of the wonder I felt as a child, and allows me to live in those magical worlds, even if only for as long as the book lasts.

What world-building is required?
You’ve probably heard that extensive world-building is needed in fantasy, and it is true. First and foremost, you need to create a world in which magic exists. Geographically and metaphysically. That is, you need to create the physical world and you need to define how magic works there. You’d think that in a magical world, anything can happen, but the opposite is true. In order for the world to feel real, the magic must be limited.
And then there’s all the rest of the stuff that goes into world building: culture, myth, traditions, prejudices, language, fashion, and food. In fantasy, you’re truly creating a full and complete world.

Name one thing you learned from your hero/heroine.
I learned that for me, a character might not feel like a real person until you can make fun of her. I wrote Ennara with a full personal background, including strengths and faults, but she didn’t really come to life for me until I took her through some comedy exercises. Then her humanity and her fragility shone.

Do you have any odd or interesting writing quirks, habits or superstitions?
I now run all of my characters through comedy setups before writing with them, just to be sure that they have their own quirks, failings, and humanity, and so I can write funny scenes with them.

Are you a plotter or pantser?
I’m a dedicated plotter. I guess it’s just the tech writer in me—but when you start your writing career with manuals, you just learn to outline. You can create books faster, ensure all information needed is there, and organize your information better when it is outlined.
When writing fiction, I don’t outline to the same extent as I would with a user guide, however. I feel that would kill the fun of being in the adventure while you are writing it, and allowing for surprises. But I do outline all major plot points, the character development , and extras like comedy ahead of time. It keeps me on track.
I did try to pants it once, and I learned my lesson. The revisions required by that story would have tripled the drafting time, easily. Never again!

Look to your right – what’s sitting there?
My husband’s office chair, where he spends many hours gaming. An HP 3-in-1 printer that I bought in 2002, it still prints, scans, and copies wonderfully. Probably the best hundred bucks I ever spent on electronics.

Anything new coming up from you? What?
Yes! I’m currently working on book two of the Ennara series, Ennara and the Writ of Shadows. Book two picks up Ennara’s story in her second year of training at the Druidic Academy in Icelan.
I’m also writing a paranormal mystery under my pseudonym, Chase Theroux, called A Hair of the Dog. It’s the story of a young woman who is a werewolf. When she’s forced to solve who killed her friend and an unrelated cold case from thirty years ago, she discovers she’d bitten off more than she can chew, including the monster that cursed her.

Do you have a question for our readers?
Thick books or thin? What size of novels to you like to read?

Eleven year-old Ennara Gaern has a serious grudge against the dragon on her right hand.

Born with a caul—a mask that foretold magical powers—she was immediately inked with the fiendish, fire-breathing tattoo that forces her to study boring texts, cover her hand continuously, and worst of all, keeps her from visiting the beautiful capital city, Dordonne. But her quiet life changes when one night she is attacked by a shadowy demon.

Tork, an old friend and wizard, is enlisted to help. But when he arrives, he informs Ennara’s parents that she is her world’s only hope of finding the legendary Sword of Gisilfrid, which is needed to destroy the curse that is creating the demons. Ennara doesn’t want to leave on the dangerous quest, but when she learns the curse threatens her world, she reluctantly agrees.

Ennara and the wizard begin a perilous journey to the Sunken City, pitting them against dangerous oceans and pirates intent on claiming Ennara’s magic as their own. With only her friends at her side, including the intelligent, aquatic cat Smoos, Ennara must defeat monsters guarding the sword and servants of the Fallen Druid. When her world is covered in darkness, will she know how to dispel the curse?

Ennara shuffled to the rear of the cheese vendor’s stall, crouched low, and aimed. “Mag gwihuwo!”

A fine finger of black smoke curled toward the meat shop. As the ashy spell landed on the animal parts, they twitched. A woman walking by the stand shrieked. The butcher looked up, his eyes bigger than eggs and his mouth in an “O.” Several shoppers shouted in astonishment. Others yelled and ran.

A passing monk cried, “The devil is among us!” as six headless hens wriggled their way off the hooks and scrambled on the ground, flapping their featherless wings.

Then the lamb legs got free, and there they were, bouncing round the empty area in front of the butcher’s stall. The crowd parted. Some ran home. Others ran inside stores and shut the doors, but many stayed to see what would happen. The center of the plaza was clear except for the butcher, who hid in his stall clutching a cleaver, the city sentinel, still holding Kithe, Mr. Dulfsnark, a dozen reanimated chickens, five dancing legs of lamb, and a menacing zombie hog.

The watchman spun around as the gathering dispersed and saw the reanimated meat. “What the…?”

A chicken bolted for the man’s leg. He released his grip on Kithe and punted the creature away. The chicken flapped its wings as it whizzed through the air and smashed into a vegetable cart.

Mr. Dulfsnark made a mad grasp at a bouncing leg of lamb and struggled to hang on to it.

“Hey!” the butcher called, “You’ll be paying for the lamb, Dulfsnark!” 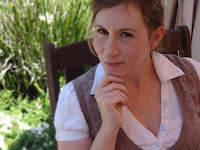 Like many writers, I have a full life in which I juggle many duties and joys. I love to cook, garden, and play with my twins. As a mother to toddlers, I write whenever I am not helping them navigate their day--which typically means in the early mornings and early afternoons when they sleep, and sometimes when Grandma comes to visit.

I was twenty-two when writing became a passion of mine. I've been doing it in one form or another ever since. But it took me a very long time to follow my heart's desire to tell stories.

For years, I simply journaled. I delved into writing articles for newsletters and grant proposals. I settled into technical writing, often finding myself a one-person writing, editing, design, app development, and publication team. I learned the basics of journalism, and finally, when on maternity leave with my twins, I turned to writing fiction.

I am grateful for every reader I have. Writing can be a solitary pursuit, but it can also be a dialog, a meeting of the minds. I invite you to connect with me:

Buy the book at Amazon, BN.com, Smashwords, or ITunes.
Posted by MJ Thomas at 4:00 AM